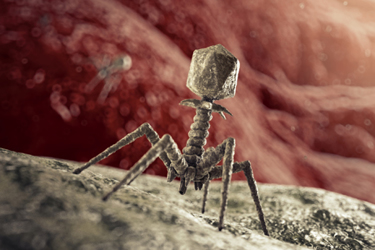 Since the advent of penicillin (and perhaps well before that), antibiotics have saved countless lives. In the process, they’ve also ravaged countless microbiomes, contributed to antibiotic-resistant so-called “superbugs,” and increased dependence on stronger, potentially toxic doses in the name of public health.

In 2015, Paul Garofolo launched a company with the intention to revolutionize the way we combat disease-causing bacteria. He had the vision—a precision approach to antibacterial therapy that would kill bacterial pathogens at a genomic level while preserving the integrity of bacteria that support good health. He locked up the necessary IP on the science – a CRISPR-Cas 3 payload and vectors including bacteriophage, adenovirus, and AAV. He just needed a place to do business.

The Promise And The Peril Of Manufacturing Bacteriophage

Cas3 is a defense enzyme that Gorofolo describes as working like Pac-Man. “unlike a precision gene editing tool like CRISPR Cas9, Cas3 latches onto a strand of DNA and chews on it, permanently killing one side of the double helix,” he says. While the world was enamored with precision gene editing enabled by Cas9, Garofolo says no one was paying particular attention to Cas3. The company moved quickly to secure intellectual property and launched with a focus on bacteriophage as a delivery vector.

“When you have a large molecule manufacturing facility, there are really two things that terrify you. One is mold, which can shut down your site really quickly. When you're dealing with liquids, drains, and water lines, it’s not that hard to get mold if you're not paying attention,” says Garofolo. “The second is phage, because phage can rip through the bacterial cell lines you’re using for any number of processes and wipe them out.”

That makes bacteriophage a particularly respected vector, and one that many outsourced manufacturers are reluctant to touch. “Now what we're trying to do is actually grow this virus,” says Garofolo. In the early days of Locus, he reached out to some of his old friends in the CMO space—Garofolo spent six years in business development capacities at Patheon—and asked them if they’d be interested in contracting bacteriophage work for Locus. “They were like, ‘come on, man. You know the answer to that. No way you can come anywhere close to our sites. Give us 20 million dollars and build another building outside one of our plants and maybe we’ll do it for you,’” Garofolo recalls.

With limited—if any—capacity to rent, Locus decided to invest in its own. Garofolo wasn’t confident an outsourcing partner would have the tech expertise anyway. Its products are complex, comprised of combinations of three to eight phages weaponized with CRISPR Cas3 and other enzymes. Garofolo says a single production run is equivalent to executing eight simultaneous large molecule runs in a traditional sense. “We’re so far out on the edge of doing this precision medicine with phage and CRISPR, nobody knows the technology and how to manufacture it as well as us,” he says.

Because bacteriophage is such a prolific grower, making it at bioreactor scale sets Locus up for an intense and voluminous purification and polishing exercise. “These are things that never scared me, and I think that’s created a massive competitive advantage for us because we can move faster than anyone else. We control our cost of goods. There’s an advantage in the ability to get right back on our own lines to fix mistakes immediately,” says Garofolo.

Tune in to episode 79 of the Business of Biotech podcast to learn more about Locus Biosciences and its homegrown approach to revolutionizing antibiotics, from how it funded its manufacturing buildout to who it’s partnering with along the way.