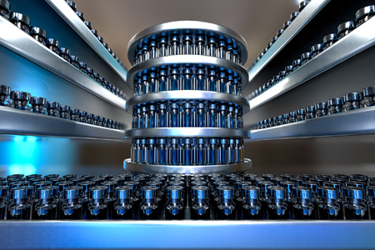 Just months ago, one might have questioned the business case for jumping into – or even remaining in – that crowded race.

Then, along came Delta. And Omicron after that. And then the ensuing questions—and lack of immediate answers—about the Moderna, Pfizer, and J&J products’ efficacy against mutations, or how many doses of each it might take to achieve protection from these emerging variants. And the next one. And the one after that. Because the next mutation isn’t an if proposition so much as a question of when it’s detected. It’s already out there, somewhere.

With that recent context and the prevailing wisdom that the virus in all its forms will become endemic, joining the bevvy of biopharmas that have thrown their hats in the ring doesn’t look so risky after all. The attributes required to win have also become clearer. Speed and scalability of manufacturing, logistics efficiency, and the agility to adapt to variants are chief among them.

Back in 2010, as part of its Blue Angel project to quickly produce medical countermeasures in the event of a global influenza pandemic, DARPA funded the establishment of advanced vaccine manufacturing facilities. One of them was located on 21 acres at Texas A&M and utilized a rapid, plant-based recombinant protein expression system based on iBio’s technologies.  The company subsequently leased the facility in 2016 and established a cGMP contract development and manufacturing organization There, it grows N. benthamiana, a close relative of tobacco, in a 130,000 square-foot hydroponic facility. In a multi-step process dubbed FastPharming, the versatility, scalability, safety and sustainability of plants is harnessed to produce desired recombinant proteins for vaccines and therapeutics. iBio Chairman and CEO Tom Isett says the process is fast and capable of turning the “10 year, billion-dollar” biopharmaceutical development paradigm on its ear. “We’re able to accelerate the timeline to clinic by as much as 12 months,” he says. “We reduce bulk drug substance manufacturing timelines because our host plants can be ready on-demand, take the master cell banking process off the critical path, and eliminate the seed train and other scale up challenges.”

A Zoonotic Perspective On Vaccine Development

When Isett joined the company in the summer of 2019, he made a decision that would prove timely just a few months later. iBio would develop a proprietary pipeline of candidates in oncology and fibrosis, as well as an animal health vaccine for classical swine fever. Those efforts were in full swing when COVID-19 began its global sweep.

“When we heard about this virus coming out of China in January of 2020, we thought it would end up like SARS did in 2002—a false alarm of sorts that would result in a lot of preclinical vaccine and therapeutic compounds sitting in freezers six months later,” says Isett. “We threw our hat into the ring and designed a couple of spike-based vaccine candidates, and 5 weeks later, we demonstrated the that the speed of our platform rivaled the mRNA technologies by manufacturing both. While that didn’t surprise us, what did was that SARS-CoV-2 had grown to become a pandemic,” he says. Although iBio received an invited submission to BARDA, in the end, the company wasn’t selected for Operation Warp Speed. “By October, we had to decide whether to stop development of our COVID vaccine candidates, or stay in the ring and design a second-generation vaccine that would address problems that were likely to emerge as the pandemic evolved. Obviously, we stayed in the ring,” says Isett.

While that ring is a crowded one, iBio’s approach to its COVID-19 vaccine program represents anything but another spike vaccine candidate.

For starters, the company’s deep roots in animal health give it a leg up on understanding the biology of zoonotic diseases in humans. After initially running iBio’s animal health programs Dr. Melissa Berquist has recently taken the lead on the company’s human vaccine development program, too, and is now Head of Vaccine Development. That appointment is strategic. Dr. Berquist’s comprehensive mastery of the impact of infectious disease was earned over the course of a career delivering solutions for transboundary animal diseases of high economic consequence—specifically, the impact of zoonotic transmission between people and animals—at Texas A&M’s Institute for Infectious Animal Diseases. Prior to that, she was with the Department of Homeland Security’s Science and Technology Directorate, where she focused on the biologic aspects of infectious disease in the context of impacts to trade and national security.

That’s a holistic view, and one that’s particularly poignant in the context of COVID-19, a zoonotic disease that’s adept at jumping species, and one that’s had immeasurable and far-reaching societal and economic impacts. As it relates to the development of therapeutic and prophylactic biologics to address zoonotic diseases in humans, there might not be a better pick than Dr. Berquist.

“We talk about the concept of ‘One Health,’ which is the intersection of public health, animal health, and the role the environment plays in disease transmission cycles,” says Dr. Berquist. It’s an idea that hasn’t received much attention during the all-hands-on-deck effort to address the virus’ threat to human health, but one that will prove integral to the prevention and treatment of zoonotic diseases moving forward. “Seventy-five percent of emerging infectious diseases are of zoonotic origin. They start in animals and move into people,” Dr. Berquist explains. “There's usually a dead-end host, but if a disease moves back and forth continually between animal species and humans, we have the potential for a very dangerous situation.”

That potentially dangerous situation is often discussed in public health official communities, but few, says Dr. Berquist, are fully committed to integrating across the One Health spectrum to impact transmission changes and disease epidemiology, and the factors that influence interspecies transmission. At iBio, that’s all part of the “big picture” that informs the company’s approach to its COVID-19 candidate, dubbed IBIO-202. “On the animal health side, we’re constantly dealing with outbreaks of highly transmissible and high-morbidity diseases with significant trade, safety, and economic impacts that require agile, novel, and cost-effective solutions,” she says. “It’s common to attempt to control diseases in animals as a means of protecting human public health,” says Berquist, pointing to rabies vaccinations in domesticated animals and wildlife alike, and the vaccination of cattle, sheep, camels, and goats to prevent Rift Valley Fever in Eastern Africa. “Whether animal, human, or zoonotic, viruses are going to decimate the immune system in very similar ways.”

Dr. Berquist’s presence as both an expert and a champion of iBio’s vaccine program brings a holistic perspective that’s not unnoticed by Isett. Dismissing the virus’ zoonotic origins in the race to contain it, he says, is folly. “The awareness of how this virus moves is really important as we think about what's needed in terms of vaccines, and to a degree, therapeutics,” he says. “The propensity of COVID-19 to cross species barriers is not insignificant. We're running this great global experiment, not just amongst people, but amongst animals, where a highly mutable spike protein, which is what we're currently vaccinating against, is bouncing around trying to ensure its survival. It wants to be able to pick all those locks and keep changing to run around our immune defenses. It mutates fast, and there are more mutations coming.”

Those mutations—the nearly 40 we’ve seen in the spike protein of the Omicron variant among them—are central to iBio’s COVID-19 vaccine approach. “There was a decent amount of uncertainty as to exactly how durable the first generation of spike-based vaccines would be,” says Isett. As Omicron has demonstrated impartiality among vaccinated and unvaccinated hosts alike, the root of that uncertainty has come to bear. The philosophy at iBio is to seek a more stable region of the virus than the highly mutable spike protein. “We came across data generated out of the Middle East following the MERS outbreak there, which explored other proteins of a coronavirus that could be exploited in vaccine development,” says Isett. That exploration didn’t get very far at the time, as MERS ran a short course, though a relatively small number of cases are still reported globally each year. But the concept of targeting the virus’ nucleocapsid protein intrigued the team at iBio. As a matter of evolutionary principle, a virus is far less likely to risk mutation of a protein that’s central to its very survival.

Targeting the not-as-mutable nucleocapsid protein, they surmised, might result in a more durable immunity. “So many of the aspiring COVID-19 candidates in development today are still focused on the spike protein, and to us, that just isn’t sufficient given the changing mutation paradigm,” he says. The company decided to leverage its startup agility and in-house development capabilities to pursue what it dubs a “second-generation” COVID-19 vaccine targeting the nucleocapsid protein.

“We know that there’s an antibody response against the nucleocapsid protein in patients that have recovered from SARS CoV-2 infection. That differentiates this protein from other highly conserved proteins within the SAR CoV-2 genome, which the body doesn’t see, and therefore doesn’t react to with an immune response.” adds Dr. Berquist.

iBio is currently making moves to take its nucleocapsid protein-targeting candidate to the clinic, where studies will likely be focused on preventing infection among the vaccinated. “We’re seeing a significant and growing number of natural infections among people vaccinated with the spike protein, and we think our candidate might serve well as a heterologous or universal booster that might also address some of the gaps we’re seeing with existing options. A spike plus nucleocapsid vaccination combination could ultimately be optimal to provide durable, more complete immunity and avoid the risk of an escape variant.”

Isett says iBio is also pursuing a strategy it’s dubbed DAVI, short for durability, access and variant inclusion. “We need to get more vaccines out to more portions of the world, and that effort is currently hampered by cost and supply chain challenges. It’s not helpful to ship frozen RNA vaccines to places like Tanzania. In this and future pandemics, do we want to find ourselves in a position to have to mobilize an army of healthcare workers to put shots in arms?” To address those issues, the company is exploring alternative avenues of administration, including a current feasibility study of a self-administered intradermal patch. The company is currently engaged in dialogue with the FDA on regulatory avenues for clinical trials with IBIO-202, and Isett’s hopes are high that the company’s unique proposition will get some attention. After all, he asks rhetorically, “If we can assume there will continue to be variants, why would we continue to repeat what's already being done with the spike protein?”