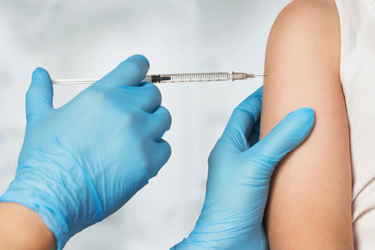 As scientific and investment interests in vaccine development advances crescendo on the back of COVID-19, a Cincinnati-based biotech startup seeks to revolutionize the approach to influenza vaccinations.

In the shadows of a global, all-hands-on-deck and historic effort to develop, approve, manufacture, and distribute COVID-19 vaccines, Blue Water Vaccines has been quietly working on a separate vaccine project that, not long ago, stirred quite the controversy.

The company’s universal influenza vaccine candidate, which is being developed in partnership with the University of Oxford, aims to provide protection from H1, H3 and Flu B. While Blue Water was formed as recently as 2018, the concept it’s building on was born out of research conducted back in 2007 by University of Oxford mathematician and Professor of Theoretical Epidemiology Dr. Sunetra Gupta.

Dr. Gupta’s early work, which analyzed the evolution of the influenza epidemic from a mathematical perspective, resulted in a theory that influenza and its seemingly ever-evolving strains are not as diverse and variable as the scientific community has long believed them to be.

While the 16 different types of HA and 9 different types of NA flu viruses create potential for 144 different subtypes of influenza A viruses, just two of those subtypes, H1N1 and H3N2, commonly infect humans. The “H” designation in those subtypes—the hemagglutinin gene, is constantly mutating, creating the many variants of the virus strain that are addressed in the currently-accepted approach to development of annual seasonal flu vaccines. Therein lay the controversy ignited when Dr. Gupta’s work challenged the status quo. The virus’ constant mutation, which enables it to escape population-based immunity developed through each season’s pandemic infections (3 to 5 million cases of severe illness and 260,000 to 650,000 deaths annually, according to the World Health Organization), hardly lends to the theory that influenza isn’t and incredibly diverse and shape-shifting virus. Many in the scientific community panned the theory/

Then, in 2018, a genomic sequencing initiative led by Dr. Gupta’s team at Oxford identified the parts of the virus targeted by the immune system and demonstrated that their variability is, in fact, limited and constraining to the evolution of the virus. The team tested its findings in animal studies, which ultimately demonstrated protection against infection from flu strains that circulated in 2006 and 1977 using an influenza virus that last circulated in 1934.

Moving Away From Egg Yolks And Dead Viruses

On the back of this research and with tongue-in-cheek apologies to Drs. Thomas Francis and Jonas Salk, Joseph Hernandez founded Blue Water Vaccines in 2018, adopting a mission to create a universal, two-dose, lifelong vaccine that provides protection from H1, H3 and Flu B. “We’re looking genetically at the epitopes of the receptors that allow the virus to enter the cell. Regardless of the sub-strain of influenza, we can identify the areas of that receptor that are eliciting immune response and target those regions of the virus, which are highly protective and easy to induce an immune response against,” says Hernandez.

But the candidate’s universality and lifelong efficacy aren’t its only novel concepts. Hernandez tells us that the company will manufacture the antigen protein-based vaccines in bioreactors using an E. coli expression system. He says the approach is more cost-effective and efficient than the fertilized chicken egg method developed by Francis and Salk in 1940. That approach requires extensive—and expensive—perennial research and analysis of the strain(s) of the virus most likely to become pandemic. Once identified, the strain(s) must be cultivated in eggs, then isolated and killed before being processed for consumption.

“There’s also a significant storage and transport advantage to our approach,” he says, “as we anticipate that we’ll be able to produce a lyophilized, small product that can be stored and distributed at or near room temperatures any time of the year.”

The company’s research indicates that two doses of the vaccine are required to focus the immune response on the regions of limited variability, which would then provide lifelong protection against influenza strains for most patients. That contrasts with the current annually-administered vaccines, which only help about 50% of recipients.  Explaining the two-dose requirement of Blue Water’s candidate, Hernandez likens the immune response it elicits to a race car. “The human immune system needs to get started and then rev up to work efficiently, and the two-stage approach is as old as vaccinations themselves,” he says. “The introduction of an antigen creates a certain type of antibody—that turns the key to start the response. Then, we rev the machine with a booster that creates an immune memory,” he says.

Hernandez says Blue Water has completed the initial design and in vivo analysis of the H1 vaccine candidate design, while the H3 and Flu B constructs are entering into the final in vivo stage of testing in advance of the universal program moving into manufacturing. “Our plan is to initiate in-human studies later this year. We’ve been a bit challenged by COVID-19-related closures, particularly as the recent second wave hit in the U.K.,” he says. But, he admits, COVID-19 hasn’t been all bad for vaccine manufacturers. “Until the pandemic, the vaccine world wasn’t viewed as particularly exciting,” he says. “We had a reputation for long clinical cycles, which introduced investment risk and tended to cause investors to shy away from emerging vaccine companies. As such, there wasn’t much technical progress in the field.” That changed when, seemingly overnight, the entire world became fixated on the development of COVID-19 vaccines.

The rising tide, as they say, has lifted all ships. Blue Water is also moving forward with a streptococcal pneumonia vaccine that improves on existing commercial products in the space by addressing middle ear infections. It’s currently developing cGMP material to enter human studies with that candidate. Meanwhile, it’s keeping an eye on the horizon with the development of a vaccine candidate to combat the newly-identified and potentially pandemic influenza strain G4 EA H1N1, which is being compared to the 2009 A(H1N1)pdm09 swine flu.

Learn more about the company at bluewatervaccines.com.