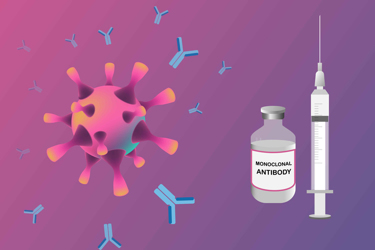 Back in the late 1980s, a group of researchers led by Professor Sir Marc Feldmann, Ph.D., demonstrated that rheumatoid arthritis-diseased joints are riddled with pro-inflammatory cytokines, one of them being tumor necrosis factor (TNF). In the lab, Dr. Feldmann’s group discovered that blocking TNF reduced levels of present pro-inflammatory cytokines in arthritis, which ultimately led to Centocor’s development of infliximab (brand name Remicade, now marketed by Janssen Biotech), which was approved by the FDA in 1998.

Leading up to that approval, James Woody, M.D., Ph.D. was chief scientific officer at Centocor, where he worked with Dr. Feldmann on clinical trials of infliximab.

In 2019, the pair reunited and formed 180 Life Sciences, along with Professor Lawrence Steinman, M.D. and Jonathan Rothbard. M.S., Ph.D. Dr. Steinman is an antibody pioneer in his own right, he played a key role in the discovery and commercialization of natalizumab (Tysabri) as a multiple sclerosis therapy. For his part, Dr. Rothbard is a small molecule expert, having helped found several companies. 180 Life Sciences went public in November 2020 via the SPAC KBL Merger Corp. IV. That deal is fueling development of a pipeline of candidates addressing Fibrosis and Anti-TNF indications including Dupuytren’s disease, frozen shoulder, POCD (post-operative cognitive decline), and NASH.

Dr. Woody sat down with BioProcess Online for a discussion on the company’s developmental and clinical progress.

“We’re not just treating Dupuytren’s, we’re seeking to prevent it from beginning in the first place,” says Dr. Woody. The company’s Phase 2b clinical trial, which he says is the largest of its kind, is now fully enrolled at 181 patients. A data readout is expected later in 2021.

180 Life Sciences’ Phase 2 frozen shoulder trial is expected to kick off by year’s end, with a Phase 2 POCD trial coming on its heels next year.

Dupuytren’s contracture causes the abnormal formation of tissue nodules beneath the skin of the palm. These knots create a thick cord that can pull one or more fingers into a contracted, or bent, position. Surgery is the current standard of care. Similarly, frozen shoulder, or adhesive capsulitis, occurs when the capsule encasing the shoulder bones, ligaments, and tendons thickens and tightens around the shoulder joint, resulting in severe pain followed by restricted mobility of the shoulder. A significant percentage of patients with frozen shoulder also have Dupuytren’s, so the company feels the fibrotic process is similar, and might also be prevented by anti-TNF injections into the shoulder joint. Administering an antibody therapeutic directly to the affected areas requires a specific syringe and needle, which is central to the 180 Life Sciences product.

The company’s Dupuytren’s and frozen shoulder candidates are based on adalimumab, the third anti-TNF biologic approved by the FDA in 2008 (the second was etanercept in 1998). 180 Life Sciences currently obtains the drug from AbbVie, which markets it for rheumatoid arthritis under the brand name Humira. “If successful in preventing the disease progression, Humira will have allowed us to demonstrate the proof of principle, that anti-TNFs will be able to prevent both Dupuytren’s and frozen shoulder,” says Dr. Woody.

In early tests, 180 Life Sciences’ Chairman of the Clinical Advisory Board, Professor Jagdeep Nanchahal, MBBS, examined the chemical mediators driving fibrosis in Dupuytren’s nodules that had been surgically removed. He discovered that anti-TNF antibodies would shut down binding mediators, which form the fibrous cords that cause finger contracture. “We’ve had 181 patients come in for a series of four injections. More than 85% of participants received all four injections and there were no adverse events,” says Dr. Woody.

The antibodies the company is using are readily available. “AbbVie makes the product in a very high concentration, which is what we need, and they also remove citrate, which causes pain,” says Dr. Woody. 180 Life Sciences is in discussions with other companies producing adalimumab biosimilars, but it has no intentions of developing its own anti-TNF antibody. “Our objective is to acquire and use any one of those in a partnering agreement, rather than trying to produce something ourselves,” he says. “We’re simply taking the antibody we acquire and reformatting it into a kit that makes it easy for clinicians to perform these injections. In this case, the packaging and the ease of administration by the clinician are the key advantages of the product, and we've got patents around how we're producing those,” he says.

180 Life Sciences anticipates a medical device review, but because the antibodies it’s using are well-known, Dr. Woody doesn’t anticipate any unforeseen regulatory hurdles related to the therapy itself.  “We're pretty confident we'll get our programs up in the U.K and finish the data and then transition them to the U.S. 12 to 18 months thereafter,” says Dr. Woody.

Outsourcing Decisions On The Horizon

When the Dupuytren’s data from its U.K.-based Phase 2b Trial is published in Q4 of this year, 180 Life Sciences anticipates being prepared to decide which antibody it will use to move forward. At that point, the company will be looking for a contract manufacturer to assemble the kits it’s developing. While contract manufacturing space is at a premium, Dr. Woody doesn’t anticipate any formidable challenges acquiring it. “What we’re doing doesn't require any new inventions on the part of the manufacturer. They’ll simply be repackaging the antibody into our syringes under the usual GMP conditions and assembling kits that are convenient and ready for clinical use.”

A Potential Approaches To POCD, NASH

Dr. Woody believes that TNF also plays a key role in the 15% to 20% of post-operative patients who experience post-operative cognitive decline. A Phase 2 trial of pre-operative anti-TNF in hip fracture surgery is planned to kick off in Q4 2021 or early 2022. “Conventional wisdom is that POCD is related to surgical anesthetics, but we’ve found that TNF affects the brain post-operatively. TNF released after tissue damage changes the blood-brain barrier, allowing cytokines and inflammatory cells to go into the brain and cause inflammation in the cognitive areas,” he says. As a result, a significant number of patients end up requiring dementia care in nursing homes after routine procedures such as hip or knee replacements. “We think we can possibly prevent that as well, by delivering the antibody intravenously at the time of surgery.”

The company’s discovery-phase program for NASH, which affects nearly 30 % of U.S. adults and for which there is no approved therapeutic, is currently in the lab. 180 Life Sciences is working in collaboration with Celgene-BMS for target discovery using human liver samples.

SPAC Brings A Trio Of Pain, Inflammation Management Companies Together

The aforementioned SPAC that formed 180 Life Sciences brought three companies together under one banner: one in Israel working on synthetic cannabinoid analogs, one in the U.K. working on the TNF inhibitors, and one in Palo Alto working on nicotinic acid receptor agonists. While the modalities are decidedly different, there are common threads; they’re all focused on addressing fibrosis, inflammation, and pain, and they’re all led by the foremost experts in their fields.

The company’s synthetic cannabinoids program is led by Professor Raphael Mechoulam, Ph.D., the man who discovered tetrahydrocannabinol (THC). Its α7nAChR program is led by Professor Lawrence Steinman and Dr. Jonathan Rothbard, who have been working on treatments for ulcerative colitis in ex-smokers for more than a decade. “We have the world's experts working on our programs, and while they’re coming at it from different angles, they’re all synergistically focused on pain and inflammation. And in many cases, we anticipate combining therapies, such as our anti-TNF products and synthetic cannabinoids, to simultaneously address both pain and inflammation in arthritis patients, for instance.”