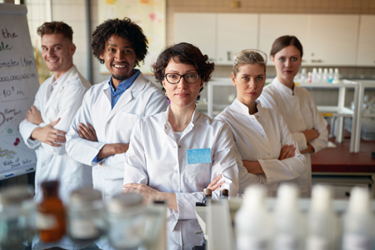 A recent Business Insider review of 182 pharmaceutical companies revealed that more than 90% of their CEOs were male. A June 2021 BIO report found a bit more diversity elsewhere in the C-suite, where 3 in 10 executive biopharma positions are filled by women.

Just two years ago, that ratio was 1:13. Then, the company’s only female executive was EVP, Chief Compliance Officer, and General Counsel Tara D’Orsi, J.D.

But diversity in the Kyowa Kirin C-suite extends beyond gender balance. A quick perusal of its executive roster reveals a group that reflects a wide range of nationalities, ethnicities, races, and cultures.

The balance achieved at Kyowa Kirin NA is strategic, earned, and uncommon in this industry. It’s even more uncommon among Japanese-owned biotechs that have been operating for more than 70 years.

We caught up with Walrath for the inside story on the company’s diversity and inclusion initiatives.

Why KKNA Is Committed To The Cause

Gary Zieziula became President and Region Head at KKNA in April 2020, a spring marked by a trifecta of disruptive health concerns and social movements in America. The COVID-19 pandemic was reaching its initial heights, while the #MeToo and Black Lives Matter movement and protests were tied for a close second in the daily news cycles. When Zieziula took office, says Walrath, the collective KKNA conscience was already aware that a diversification opportunity existed within its ranks. The health and social climate of the day only served to crystallize and accelerate the company’s initiative. “We had been saying we valued diversity all along. But Gary assumed his role at a time that called for more explicit action,” she says. “Gary demonstrated bravery by acknowledging that he wasn’t happy with where we were at the time and acknowledged that in his conversations with employees.”

KKNA’s motivation to create change was timely for another reason; it had the opportunity to affect the transformation it sought. Buoyed by the recent approvals of three products for use in the U.S. (Crysvita®, a rare disease treatment; POTELIGEO®, a humanized mAb for oncological indications; and NOURIANZ®, a small molecule neurologic treatment), the company grew North American revenue from $25 million in 2017 to more than $500 million in 2020. KKNA has been actively hiring to keep up with that growth and has placed more focus on diversity in recruitment.

By June last year, KKNA began taking specific actions on its commitment. Since early 2020, it’s added nearly 200 new employees, growing to a workforce now totaling 420. “We are looking to build a strong team of really skilled and diverse talent in all facets of our business,” says Walrath. “That commitment extends from our labs all the way to the senior levels of the organization.”

Walrath is quick, however, to clarify that diversity for the sake of diversity wasn’t the goal at KKNA. “We didn’t set a quota or a numeric goal for how many women or minorities we felt we ‘needed,’” she says. “Our goal was simply to work consciously to create an environment where diverse talent thrives and is able to fully contribute to our mission.” While that lofty intention might have flown in the face of the ‘can’t improve what you can’t measure’ axiom, refusal to ascribe specific metrics was strategic. “As a business with a high rate of change and growth, we agreed that finding the best talent was our first priority, but that the search process would include a diverse slate of candidates for these roles,” she says.

Key to executing a search process apropos to the mission was to widen the recruiting net. “We recruited from within the organization by creating more pathways for advancement. Externally, we also tapped into talent pools that we hadn’t explored in the past,” says Walrath.

Another key to executing on its goals was the formation of an internal work group to define the company’s broader diversity and inclusion agenda. “Rather than bring in diversity and inclusion consultants, we decided to establish an internal work group of employees, who are passionate about this mission and opportunity,” says Walrath. The voluntary group of 30 associates meets every 3 weeks to assess the company’s diversity in real-time, identify problems and opportunities to be addressed, and develop action plans to address them. “Our executive sponsors seed that group with ideas, but ultimately, it’s the employees helping to shape and define our priorities.”

The creation and execution of this work group involves a lot of listening and learning, says Walrath. She recalls asking a couple of open-ended questions in one of the group’s first sessions, including what members wanted to achieve, and what ‘good’ looks like. “We found that before we could talk about goals or plans, we first needed to understand what is on everyone’s minds - not just what they see at work and what they desire to change, but also what they are experiencing every day in their communities.  Individual perspectives and reasons for getting involved differ. There are a lot of perspectives to wrap our heads around and consider,” she says.

Still, Inclusion means every voice gets heard. On incredibly sensitive topics like gender and race disparity, some voices are more hesitant to share than others. “We’ve had team members acknowledge that they’ve come with all the right intentions and really want to help, but that they’re apprehensive about saying the wrong thing,” says Walrath. Exacerbating that challenge is the fact that, like most geographically dispersed business collaborations of the day, these meetings are happening virtually via tools like Zoom and Microsoft Teams. “To alleviate that apprehension, we’ve spent a lot of time trying to establish a psychologically safe environment for these conversations to take place in. We’re trying to build trust among the team as we embark on this journey. I can’t overstate this challenge, but we’re taking it on,” she says.

What’s Next For Gender Balance In Biotech

When entire organizations are analyzed—from the head office to the lab and all points of process development and manufacturing in between—the biotech industry is much closer to gender parity than what’s revealed in its head offices. That aforementioned BIO survey found that 47% of all workers in the space are women. The growth in the number of women in biotech lab, R&D, process development, and manufacturing roles is a testament to the work being done at the earliest levels of education to encourage and welcome girls into STEM programs. That work on a generational problem began only recently, resulting in today’s populace of young, female mid-level biotech talent.

Perennial challenges remain for women in the biotech profession. STEM program matriculation must continue to improve. Unconscious biases linger and must be confronted. Maternity and caregiving, especially to children being educated remotely, remain potential obstacles and should not disadvantage a woman’s career path. Despite these challenges, the critical mass of female biotech talent is growing, as is awareness of the value of diversity and inclusion. These can only yield upshot moving forward, and KKNA is poised to leverage the momentum.

“We have a lot more progress we need to make throughout the organization,” says Walrath, speaking of both KKNA and the broader, global company based in Japan. There, the company 70 years in the making faces more challenges to change quickly. The average tenure of the predominantly male C-suite, for instance, is somewhere between 20 and 30 years. Attrition is lower and hiring isn’t happening at the same rate as it is in North America, on the heels of the company’s recent U.S. approvals, so there are fewer opportunities to balance the team via new hires and openings in the executive ranks. And, generally speaking, businesses in Japan haven’t moved quite as quickly as those in the U.S. to embrace diversity and inclusion as core corporate values. Walrath says that’s changing though—at least at Kyowa Kirin’s Japan headquarters. The company has added women to its board and executive team, included diversity as part of its 2030 vision, and celebrates the positive changes in its North American subsidiary.

“Even with the progress we’ve made, we know there’s still a lot more we can do.  And we're working on it,” says Walrath. “I think that’s part of the good news in this story. We’re committed to working on it.”