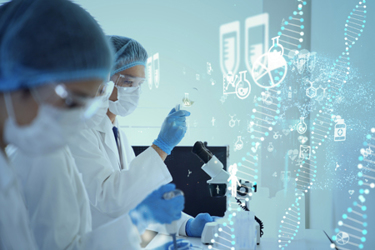 Just four years removed from FDA approval of the first gene therapy here in the U.S., we’re writing the first chapter in the book of gene therapy manufacturing. It's an area of constantly new discovery and innovation, and that paints a beautiful landscape for discovers and innovators like Dr. Palani Palaniappan, CTO at Aruvant.

Dr. Palaniappan’s company is manufacturing gene therapies to address sickle cell disease and hypophosphatasia, the former affecting the production of hemoglobin and causing frequent episodes of severe pain, weakness, and other serious complications and the latter a devastating, ultra-orphan disorder with multi-organ damage and high mortality when left untreated.

The Business of Biotech Podcast sat down with Dr. Palaniappan for a conversation on where gene therapy development and manufacturing is headed from here. He began that talk with a quick glance over his shoulder.

“This time in gene therapy is reminiscent of the late eighties and early nineties,” says Dr. Palaniappan. “We were at an inflection point in biologics as antibodies, proteins, and a range of other biologic therapies came into play for patients affected by multiple diseases and disorders. We’re once again at one of those inflection points in the industry where we see the potential to address multiple types of diseases and genetic disorders with a new technology.” This time, however, the potential is even bigger, he says, because it’s potentially curative.

Where the parallel to biologics breaks down, albeit slightly, is in the steepness of the curve. Dr. Palaniappan says that’s a product of expectation; just as the pace of advances in gene therapy is quickening, so is the prevalence of disease. That creates demand. Meeting that demand requires access to next-generation manufacturing capacity, something that’s currently in short supply.

Tony Khoury is EVP at Project Farma. His organization spends the bulk of its time and expertise helping biopharma companies make manufacturing decisions, chief among them whether to lay out the capital infrastructure necessary to develop and manufacture in-house or to align with a capable CDMO. Khoury says the decision often boils down to a two-part assessment, one part quantitative and the other qualitative. “We consider the financial benefit, upfront capital requirements, cash flows and commitment plans. We calculate ROI and break-even points.” He admits that’s an exercise that’s rife with variables, particularly among early-stage biotechs with multiple preclinical candidates. Unknowns often include yields, scale, and dosing volume, all of which are key to determining capital commitments. “Determining how much manufacturing capacity and GMP material will be required to progress through clinicals and properly position for pivotal trials and commercial manufacturing requires a degree of assumption, and those assumptions won’t be right. They will move and change, and that's okay. You begin with inputs and critical assumptions, you develop a strategy and modify the plan as you go.”

That assessment, he says, takes place early—often as early as the private equity investment level, before the company has even been formed—so variability must be embraced.

When considering a CDMO, says Khoury, it’s important to determine whether that manufacturing partner is flexible enough to embrace the pivots with you. Just recently, the biotech Ziopharm offered a case study in the perils of this planning process when it laid off more than half its workforce in what it characterized as an effort to reallocate resources to in-house manufacturing after expressing disappointment with the performance of its outsourced manufacturing partner. That exercise isn’t for the faint-hearted, or the light-pocketed.  “When we say ‘manufacturing,’ we tend to think just about the production aspect. But that includes analytical development, process development, manufacturing, quality controls, regulatory concerns, warehousing and cold storage, supply chain, and logistics," says Khoury. "When we say the word ‘manufacturing,’ we're genericizing all these subcategories that must be taken into consideration.” Those subcategories require immense resources, immense expertise, and typically, years to bring online.

Khoury says a hybrid option is increasingly common among early-stage biopharmas. “Because of these moving inputs, we often recommend a hybrid, phase-appropriate build,” he says. “It’s a de-risking strategy.”

Dr. Palaniappan says Aruvant has taken the hybrid approach as it advances toward pivotal trials. “We’re currently in a phase I/II trial, with a few patients worth of data in our program, and we’re in a place where we like our chances,” he says, adding some insight into the company’s manufacturing approach. “We have an anti-sickling hemoglobin, which is much differentiated from what others have, and we have a low-intensity conditioning regimen, which further differentiates us from others who use busulfan, a painful way to deal with conditioning of bone marrow. Finally, we need to maintain the stemness of the cells that we extract from these patients,” he explains. That’s all wrapped up in a proprietary process, which has forced executives at Aruvant to think long and hard about its manufacturing approach. “These three elements combined put us in a great place from a process analytics, efficacy, and safety standpoint. The question is, how do you translate that into a manufacturing paradigm for a large number of global patients?”

For Aruvant, the answer to that question began with its people. It’s hired a number of gene therapy process development and analytics experts in the space to develop its candidates. What it considers the more routine aspects of manufacturing and GMP testing, Aruvant outsources to CMOs like Lonza.

Dr. Palaniappan says Aruvant is currently exploring manufacturing options for its second program, a preclinical AAV candidate called ARU-2801 that aims to address the newborn bone disorder hypophosphatasia. “This is a process in evolution, and we want to look at everything in our power. If we have to build a small footprint for manufacturing we will, but the majority of this is going to be in a hybrid format. We’ll align our internal resources to the higher value activities like creating IP, and try to get the routine activities outsourced to achieve the best of both worlds.”

Tune in to episode 61 of the Business of Biotech podcast for more of Dr. Palaniappan’s insight and advice on gene therapy facilities design, manufacturing trends, regulatory considerations, and more.