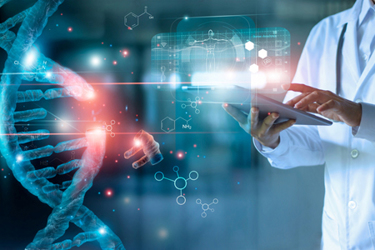 The diseases NeuBase hopes to address, initially, touch some 10 percent of the global population, but just 5 percent of them are addressed by therapeutics. Most of those existing medicines, Dr. Stephan characterizes as suboptimal. “While the patient population is relatively small, it’s severely affected,” he says. Thirty percent of kids diagnosed with a genetic disease die by the age of five.

But Dr. Stephan’s chops are sharp and his mission clear. He served as Chairman of the Department of Human Genetics at the University at Pittsburgh, where he earned his Ph.D. in Human Genetics. He was an NIH fellow. A native Pittsburgher, he founded the city’s leading life sciences organization in LifeX, along with more than a dozen other startups. He’s regarded as a pioneer in precision medicine. When he says that we’re “at a really special inflection point in the history of the pharmaceutical industry,” he says so without the tone of PR-speak embellishment you might expect from a serial entrepreneur.

From Mainframe Pharma To Digital

“We’re moving from what I like to call the mainframe model of pharma to the digital era of pharma,” says Dr. Stephan. In the mainframe era, he says, pharma was defined by a strategy of pouring tens or hundreds of thousands of different chemicals onto a cell or a protein of interest, hoping some of them would stick, and then hoping a subset of those that stuck would do something positive to the disease state you were trying to impact. “We’d then spend the next ten years and $2 billion to $4 billion in the attempt to spit out one single drug.”

This approach, he says, was highly bespoke. “It was craftsmanship, but it was trial-and-error because we had no idea how these chemicals would interact with their target. We had to try the multiplicity of them and hope that the chemical entity wouldn’t stick to something else in the body and screw things up even worse.”

That, he says, is in stark juxtaposition to the drug discovery approach endeavored by NeuBase and a small group of other biotechs developing medicines that target DNA and RNA. “Mutations at the DNA level, whether inherited or acquired, will negatively impact the RNA and the proteins in the cells. We’re developing therapies that only interact with the bases (As, Cs, Gs, and Ts) of the faulty gene of interest, rather than targeting these big, sloppy proteins, to stop the disease at its root cause,” he explains. The drugs look like short strands of DNA or RNA that are reverse-engineered by programming in the complimentary bases of the target of interest. When administered, they can only engage the broken strand, theoretically denying off-target effects. “Once you have the scaffold that carries these bases characterized in terms of its distribution and safety, then you can start stamping things out at a really quick cadence,” Dr. Stephan posits.

Manufacturing’s The Easy Part. The Market? Not So Much

Dr. Stephan says NeuBase combines two different and well-established drug manufacturing processes to produce its therapies, leveraging a number of different contract manufacturing organizations that synthesizes short peptides to achieve scale. “We’re combining a well-defined small molecule production process with synthetic peptide synthesis to create what looks like a polymer,” he says. “We can buy a synthesizer for $100,000 and stamp out 384 candidates in 50 hours for screening purposes, and that scales linearly with the number of synthesizers we operate, so we’re practically unlimited on the number of screens we can run. We don't anticipate any challenges on the manufacturing side, because we didn’t have to invent anything new.”

The biggest challenge Dr. Stephan and NeuBase have faced, he says, is creating believers in the market.  “We’re bringing forward a totally new therapeutic modality,” he says, “No one has ever brought these synthetic scaffolds comprised of peptide nucleic acids to market before, so there are headwinds that must be addressed. For the past 12 to 18 months, we’ve really been focused on overcoming disbelief, both from a financing perspective and a platform validation perspective.”

NeuBase took the finance factor into its own hands in July 2019, when it went public via reverse merger with Ohr Pharmaceutical, Inc. The company subsequently raised more than $33 million of net proceeds this spring through a public sale of common stock.

The platform validation effort also enjoyed some tailwind in the spring, on the heels of positive preclinical data from the company’s pharmacokinetics studies in non-human primates and in vitro pharmacodynamics data in patient-derived cell lines.

Of particular note, NeuBase reported that its compound crosses the blood-brain barrier and into key deep brain structures, including the caudate, which supports a key capability for development of its lead program in Huntington’s Disease. That’s a significant accomplishment. Anything larger than 400 Daltons presents a low probability that you’ll get into the brain. Many, or most of these genetic therapies are significantly bigger than that. NeuBase’s drugs, for example, range from 2,000 to 4,000 Daltons. They don’t move passively across the blood-brain barrier. “We had to invent a targeting chemistry that could actively move these things into the brain, and we proved that we could do that with the data set we release in March,” says Dr. Stephan. “We're quite excited about being able to deliver drugs to the brain, where many of these genetic diseases manifest.”

Getting back to that mainframe-versus-digital pharma reference, Dr. Stephan lauds the role computing power and big data analytics are playing in the development of these designer therapies at NeuBase. “We’re running on the rails of the billions of dollars that were invested in the human genome project, an investment that made it possible to sift through the genomes of millions of people, databasing them, and also on the rails of investments to make genetic testing ubiquitous and accessible.” At 6 billion letters per person across billions of people, that’s big, big data. “There’s a compute component to actually identifying a mutant sequence you want to target, and then designing these drugs,” says Dr. Stephan. “You can pick a specific sequence in the genome you want to target, but then you have to make sure that sequence is not present anywhere else in the genome that might cause the drug to stick there,” he explains. “Once we have a series of drugs that we've screened with activity data and cytotoxicity data, we apply machine learning to understand the attributes of those drugs and allow us to engineer out the off-target effects to give it the performance we want.”

Born At The Intersection Of DNA Sequencing And Silicon Valley

Dr. Stephan’s distinguished career was motivated by the loss of his mother at a young age. Asked how that loss shaped his scientific worldview—why he became a human geneticist—he responds with words so simple that they catch me off guard coming from a man of his intellect and stature.

“I don't like it when people get sick and die.”

That’s why Dr. Stephan has spent his career working alongside leaders intertwined in the life sciences and high tech communities. He helped build the national infrastructure for genetic testing as part of the publicly funded human genome project, which is helping doctors and their patients get access to the specific mutations that cause diseases. In his ensuing endeavors up to and including NeuBase, (he’s founded or cofounder 14 other biotechs), he’s been focused on the development of precision genetic therapies, leaning hard into technology and data to do much of the heavy lifting.