From Sales To The C-Suite Of Pioneering Gene Therapy 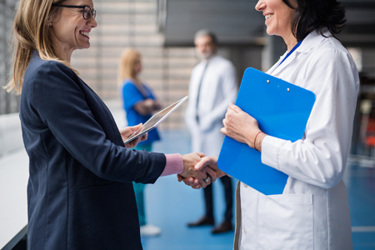 Founded in 2019 on the back of research collaboration between King’s College London and the UK Dementia Research Institute, AviadoBio is building a pipeline of investigational gene therapies for neurodegenerative diseases. Its lead preclinical candidate is AVB-101 for GRN frontotemporal dementia (FTD-GRN). It’s an intra-thalamic gene supplementation therapy being developed around the research efforts of co-founders Prof. Chris Shaw and Drs. Youn Bok Lee and Do Young Lee.

FTD-GRN is a progressive brain disorder that affects behavior, language, and movement and results from mutations in the Progranulin (GRN) gene. It’s estimated to impact up to 15 per 100,000 people, most generally afflicting 45- to 64-year-olds. Survival ranges from 7 to 13 years beyond the onset of symptoms.

AVB-101 is a single-dose adeno-associated virus (AAV) gene therapy designed to slow or stop disease progression by delivering a functional copy of the GRN gene through the central nervous system, restoring normal levels of progranulin. The approach is unique in that the therapy is administered intrathalamically—directly into the thalamus—to facilitate transport of the viral vector and the progranulin protein, and maximize biodistribution, by exploiting the neuronal networks of the brain.

With a bold and promising concept, 2021 found the company looking for a leader to help it move from concept to clinic. It found that leader in Lisa Deschamps.

The Long Route To The C-Suite

Deschamps’ backstory is as inspiring as it is seemingly unlikely. In college, she majored in business administration and marketing. At the time, her career intention was to get into the fashion business.

Those aspirations began to change in 1995, when Deschamps took a job “carrying the bag,” as she puts it, as a specialty pharmaceutical sales rep for Novartis. She took the interview at the behest of her mom, and why not? It’s a good gig for a young business professional and it made her mom happy. If she got the gig, maybe she’d stash away some coin to put toward furthering her career in fashion. Or maybe, over the course of more than 20 years, she’d work her way into the C-suite at a multibillion-dollar global pharmaceutical juggernaut.

If you’re a young pharmaceutical sales rep thinking it might be fun and rewarding to climb the ladder at a company like Novartis, here’s the roadmap, complements of Deschamp:

Along that road, Deschamps played key roles in the launches of ILARIS (mAb, autoinflammatory disease) and Zolgensma (gene therapy, spinal muscular atrophy), among others. It was the experience she had with the acquisition of AveXis and ensuing global launch of Zolgensma that she calls an inflection point in her career.

“That launch was such a whirlwind. We took the therapy to nearly 2,000 patients in 41 markets around the world at a little shy of $2 billion in cumulative sales. And we're still at the cusp of what cell and gene therapies can really do for patients and society at large,” says Deschamps. “I realized that was something I wanted to do all day, every day.”

While she always knew leading an emerging company was a “when,” not “if” proposition, that’s when Deschamps began to explore opportunities to share her skillset outside the comfort and safety of Novartis’ four walls. She admits it wasn’t easy. The longer she stayed, the harder it became to leave. “Each year there was a new carrot dangling, a new amazing opportunity to sink my teeth into,” she says.

But leave she did. Deschamps hit the fundraising trail for AviadoBio in the summer of 2021, and within three months of formally being named CEO there, she’d helped the company land an $80 million series A in the midst of crumbling capital markets and a global pandemic. “We raised a $16 million seed round to build a strong preclinical data package, which fueled that series A,” she says. “It’s the best biodistribution and safety data I’ve ever seen in preclinical work, and that data arc put us in position for a very robust pitch process,” she says.

The spoils of that round are going toward the advance of ABV-101 to the clinic.

When Deschamps and I met to record episode 112 of the Business of Biotech podcast, AviadoBio was in the process of concluding pre-clinical studies of AVB-101 in advance of filing a Clinical Trial Authorization in the U.K. and an IND in the U.S. Those studies, conducted in a large animal model that underwent intrathalamic delivery of AVB-101, demonstrated widespread cortical and subcortical distribution of PGRN. Equally important, no PGRN or AVB-101 vector was detected in the serum and liver a positive indication of minimal off-target tissue effects. “In neurological diseases, it's all about finding a way to cross the blood-brain barrier with the least amount of drug for the maximal therapeutic benefit. That's the approach we're taking,” she says.

Barring surprises, Deschamps says the company is on track for in-human trials as early as the end of this year. The therapy received Orphan Drug designation from both the FDA and the European Commission in May.

Finding patients with the GRN-specific indication of frontotemporal dementia, Deschamps admits, could be challenging. While a family history of the disease is demonstrated in about 30 percent of patients, genetic panels that demonstrate conclusive evidence of the GRN mutation are sorely lacking. That’s one reason Deschamps is an advocate for more widespread genetic testing. For patients demonstrating symptoms of the disease but with no family history of it, the route to diagnosis can be a long and frustrating journey.

Changing the genetic testing paradigm, says Deschamps, takes an organized effort among advocacy groups, policymakers, regulators, and physicians. But she’s advocated for it in the past and won.

“Cell and gene therapies can truly be curative to patients if they’re administered at the right time,” says Deschamps. “The magnitude of benefit can be really impressive, but that benefit wanes the later they’re administered.” She saw it firsthand during her aforementioned experience with Zolgensma. “Screening for spinal muscular atrophy wasn’t standard procedure in newborns. We know that in its most severe form, SMA is fatal by age two in 93 percent of patients. Time is ticking. Even in utero, those neurons are dying,” she says. Treating an SMA patient at birth can be tremendously more beneficial than doing so at 12 or 18 months of age, and Deschamps says the same is true of all diseases involving a genetic mutation. Her team at Novartis, in concert with SMA advocacy groups, led the push among policymakers for newborn screening for the disease.

Beyond the patient outcome, the burden on society and the health care system is heavy, and Deschamps says we’re not moving fast enough to lift it. “In the U.S., you have to go state-by-state to lobby for genetic screening. It usually requires a pilot, which is difficult to achieve in a rare disease. If there’s a 1 in 13,000 instance of the disease, and you do a pilot of 500 patients, it’s probably not going to meet that pilot requirement, as irrational as it may be,” she says.

Outside of the U.S., she says, newborn screening standardization is a country-by-country effort. “Could we adopt newborn screening in the U.S. if it’s proven in a large, two-state pilot? Could we implement it based on data from another large country in the E.U.?” she asks rhetorically. “I think the benefit outweighs the risk, and the rest of that time, energy, and money spent on pilots could be spent on education and implementation, as opposed to proving something that everyone already knows.”

For its part, AviadoBio will be sponsoring genetic testing in concert in its trial design, whether it’s covered or not by payors. “We feel it's our responsibility to do that, and I’ll continue to advocate for it. It’s a topic I’m very passionate about.” she says.

“I tell my kids all the time that science was my worst subject in school. 25 years later I’m working in science all day, every day,” she jokes.

Learn more about Deschamps’ journey, and the therapeutics she’s working on at AviadoBio, on episode 112 of the Business of Biotech podcast.