Developing A Cure For Diabetes Type 1 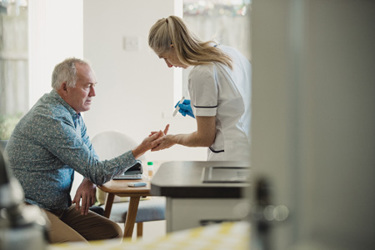 In 1993, Anders Essen-Möller's youngest daughter was diagnosed with type one diabetes. While it was troubling news, if anyone had solid footing to confront the diagnosis—and the disease—head-on, it was Essen-Möller. Already a successful biotech entrepreneur, he devoted the entirety of his attention to researching the disease. He travelled the world to consult with foremost experts. Then he founded Diamyd Medical, a company formed with the singular purpose of developing a cure.

The company got close in 2006, reaching a phase 3 clinical trial in partnership with J&J. That trial fell short of its primary endpoint, but it didn’t mark the end of Diamyd Medical. J&J handed its IP back to the company, refinements were made, and pilot studies commenced.

Since 2016, Dr. Ulf Hannelius has been the man at the helm of Essen-Möller’s effort. He took over a company and product that had demonstrated an effect and a proven safety profile. “We just needed to enhance the effect,” sums Dr. Hannelius.

The company’s strategy under Dr. Hannelius was simple: continue to execute small pilot trials, tweaking administration along the way.

In 2017, the company made an equally simple and promising breakthrough. It conducted a small trial in which the drug was administered directly into the superficial lymph node, rather than subcutaneously. The therapy, administered in low, recurring doses, effectively slowed down or altogether halted the autoimmune destruction of insulin producing beta cells through antigen specific reprogramming of immune cells.

“When we went directly to the target where the immune reaction is happening, our results looked so promising that we decided to raise capital to start a larger phase 2B, placebo-controlled trial,” says Dr. Hannelius. Today, several successful rounds of financing later, Diamyd is taking the candidate to phase 3.

Diamyd is a suspension for injection containing the API GAD65 mixed with the vaccine adjuvant Alhydrogel (alum). The human recombinant protein GAD65 is manufactured in insect cells in a GMP process, soon to be transferred to a new internally designed and run manufacturing facility in Umeå, Sweden, with a priority to receive the process technology for the manufacture of recombinant GAD65.

Today, there are no disease modifying therapies approved for type one diabetes. “We have had insulin for exactly a hundred years now, and it’s saved millions of lives, but it's a maintenance therapy,” says Hannelius. “Patients have to take it for the rest of their lives to regulate their blood sugars, and too much of it will kill them. The industry has done a great job automating the administration of insulin, but there’s nothing that addresses the underlying disease. We are trying to get to the core of the disease by reprogramming the immune system so that it stops destroying insulin producing cells.” He likens the approach to a “reverse vaccine,” whereby the suspect protein is introduced to the immune system in a non-threatening way, training the immune system to stop the attack and preserve insulin production.

A Trial In Precision Medicine For Diabetes

Diamyd Medical is launching its phase 3 trial in Europe and the U.S., having recruited more than 300 patients recently diagnosed with type 1 diabetes. “We’re screening newly diagnosed individuals and selecting those we believe to have a high likelihood of benefiting from the treatment,” says Dr. Hannelius. Screening is based on data gleaned from 600 patients who participated in four of the company’s previous trials. An analysis of that data demonstrates a specific genotype, HLA, that has responded favorably to the treatment. Dr. Hannelius says it’s a case study in precision medicine.  He believes that precision medicine is the future of pharmaceutical development, and though it's a buzzword today, he predicts it becoming the common practice. “There are many approved drugs that work well on 20% or 30% of patients, but they’re administered to 100% of patients. Perhaps 70% won’t see any benefit, and might even suffer side effects, but a 30% success rate is good enough to get approval. I don't think that will be viable or acceptable to patients, payers, and physicians in the future,” he says.

Diamyd Medical is also conducting a phase 2 trial of Remygen, a regenerative and immunomodulatory therapy for the treatment of autoimmune diabetes and type 2 diabetes, in addition to two smaller trials aimed at young, healthy individuals who, because of their genotype, are at a high risk of developing diabetes. “The disease begins well before the diagnosis, when you start seeing signs of autoimmunity based on these antibodies,” says Dr. Hannelius.  "It’s very exciting that the field is really moving forward, and we’re at the forefront of the development.”

Tune in to episode 54 of the Business of Biotech podcast for an in-depth conversation on the fundraising strategy that’s driving progress at Diamyd Medical.