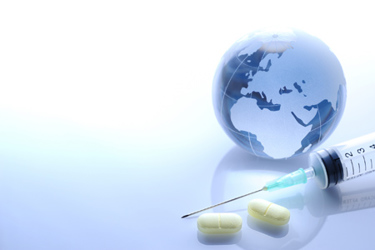 Dr. Daniela Drago has built a distinguished career in regulatory affairs, one that spans biotech heavyweights Hoffman-La Roche, Vifor Pharma, Reckitt Benckiser, Bausch & Lomb, and Biogen. In August 2021 she took her skills to clinical-stage Aurion Biotech, where she's helping to steer the company's pipeline of cell therapy candidates addressing corneal endothelial disease. It was certainly the right time for Aurion to onboard Dr. Drago, as the company is at once preparing its NDA submission to Japan’s PMDA, preparing its IND submission to the FDA in the U.S., and making clinical development plans in the E.U.

Dr. Drago’s outlook on regulatory harmonization is optimistic, but she admits that while advanced therapies—and more specifically, cell and gene therapies—hold the potential to transform global healthcare, the lack of established regulatory frameworks for advanced therapies in many countries poses a challenge to medicine developers. “The authorities that are more experienced with cell and gene therapies have adopted requirements and practices that are unique to these products,” she explains. The EMA and FDA, for example, have several guidelines that are specific to cell gene therapies, however, but regulatory requirements vary significantly between them. This, she says, results in sponsor uncertainty when dealing with multinational development programs. That uncertainty is even more acute in the rare disease space, making it more complex for sponsors in this area to reach concurrence on novel endpoints, or align their approaches to long-term follow up among disparate agencies.

International regulatory disparity, says Dr. Drago, can create inefficiencies for sponsors that fall into three main categories. Number one is the lack of established regulatory frameworks for cell gene therapies. “In many cases, when countries try to repurpose frameworks, they stretch the boundaries of their regulations based on what they determine applicable,” she says. “Second, in the U.S., Europe, and Japan, there are differences in requirements for countries with dedicated regulatory frameworks, and this causes sponsors that are dealing with multinational programs to at times conduct duplicative work.” Finally, inefficiencies arise around varying regulatory expectations for raw and starting materials. “Obtaining quality raw materials is difficult for challenging therapies, due to the need to use human- and animal-derived materials. There are issues in variability in lot-to-lot performance, for example.” When regulators’ expectations of those starting materials variables differ from region to region, sponsors must dedicate resources to managing distinct sets of expectations.

Chief regulatory officers working for multinational biotechs will face these challenges daily. Dr. Drago engages in initiatives aimed at alleviating the burden. “For one, regulatory authorities around the world are becoming more open to innovative trial designs,” she says. “For example, the paradigm of clinical development for cell therapies is shifting from the typical phases one, two, and three process into phase one, combined phase two and three, and approval. She also says she’s seeing much more activity on the part of countries working on dedicated frameworks, like the FDA and EMA, to include mechanisms for accelerated pathways. “To enable early access to patients, accelerated pathways can shorten the development and review timelines,” she says. “The third initiative is something I'm very enthusiastic about—the use of regulatory reliance.” Regulatory reliance is a process by which a national regulatory authority in one country considers the assessments performed by another national regulatory authority in reaching its own decisions. “It's important to emphasize that even when a national regulatory authority uses a reliance pathway, it maintains responsibility for the decision in its own jurisdiction. Reliance is not outsourcing of decision making, and it's not a less robust form of regulation,” explains Dr. Drago.

In 2019, The National Academies of Sciences, Engineering, and Medicine convened a committee to study the concept of regulatory reliance. Their consensus was that there are two roles for national regulators in relation to reliance. One is unidirectional reliance activity, where well-resourced regulators provide assessment to less-resourced regulators. The other is horizontal reliance activity. “These are situations where well-resourced regulators that share similar requirements and similar competencies rely on one another in regulatory activity,” explains Dr. Drago. It’s particularly effective in situations where those agencies wouldn’t have otherwise had the same data at the same time. Dr. Drago offers up an example of horizontal reliance in the Access Consortium, a collaborative regulatory initiative between agencies in Australia, Canada, Switzerland, Singapore, and the UK. “An even more advanced type of reliance is recognition, as demonstrated by recognition agreements between the U.S. and Europe on the inspection front,” says Dr. Drago.

The Role Of Sponsor Executives In Streamlining International Regulatory Activity

To stay abreast of opportunities to drive international regulatory efficiencies, Dr. Drago recommends maintaining active scholarly and industry organization presence. “Those working in industry should maintain involvement in the academic discourse, or even collaborate with regulators. They should also be involved on the policy side of the equation, through trade organizations like BIO and PhRMA or professional associations like ASGCT and ARM,” she says.

Dr. Drago adds that good standard hygiene in regulatory interaction is also important. “One common pitfall that I see new startup companies fall into, especially when working on their first IND in the U.S. or CTA in Europe, is failing to prepare their documents appropriately for the regulatory reviewer’s perspective. Your customer—the reviewer—is busy, and often overworked. Your file is just another one in a line of applications. Trust me, a grumpy reviewer is not your best friend,” she warns, before offering four tips to that end.

“First, collect and submit data that demonstrate your claims. Do not assume that the reviewer will agree with them. Second, write organized, focused, and easy-to-follow submissions. Third, take advantage of scientific advice meetings by asking focused questions and providing a risk analysis and scientific rationale for a different approach. And finally, if you take nothing else away from this discussion, do not ask for advice and then ignore it.”

Dr. Drago joined me for a discussion on the navigation of international regulatory waters on episode 85 of the Business of Biotech podcast. It’s a 42-minute brain dump from one of the industry’s foremost chief regulatory officers. If you’re submitting in multiple regulatory jurisdictions, you won’t want to miss it.