Competitive Differentiation In A Crowded Market 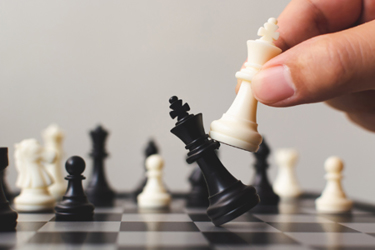 As a five-time biopharma CFO with multiple board seats under his belt, Allan Shaw has waded the competitive waters of the space on many occasions. On episode 62 of the Business of Biotech podcast, Allan broke down some central tenets of establishing competitive differentiation.

The Two Emotions That Drive Investors

Clearly, the two most fundamental aspects of differentiation are science and data. Without sound science and the data to back it up, any effort to gain attention can quickly spiral into an Elizabeth Holmes/Theranos situation. With a solid scientific principle and good data to work with, Shaw says establishing differentiation is first a matter of playing on the two emotions that drive investors and other stakeholders to align with your company: Fear and greed.

“You leverage greed by establishing that your science and your data are the best thing since sliced bread,” he says. “You create the fear of missing out by communicating why the opportunity for your candidate(s) is now.”

Your People Are Your Difference

With science, data, fear, and greed accounted for, Shaw says HR becomes priority number one. “I’d always pick good jockeys over superior assets, then let the jockeys figure it out,” he quips. “Given the huge capital market run, HR has supplanted financial resources as the most important factor for successful execution and value creation. You need good drivers with good strategies to navigate the obstacles, and talent is a scarce asset. But in this labor market, you may not have the ability to attract the talent you need to execute.”

Recruiting, he says, isn’t the only problem. Retention is equally challenging. “It's probably more costly to lose somebody than it is to retain them. That’s important to the thought process around how you’re building the right hooks and tentacles to keep people,” says Shaw. “They’re certainly aware of the market dynamics from a compensation and equity perspective. Culture is an important element to retention because your people have choices, particularly when you have this supply and demand imbalance.”

When Is It Time To Plant Your Differentiation Flag?

I asked Shaw if he sees formative biopharma companies making a strong claim to competitive differentiation too early. He pushed back on the notion, while acknowledging that there’s a wide margin of error. “I think it's arguably easier to differentiate early because you're selling the dream. Anything is possible early on. You need to have the plausibility there to be able to stake it out, but it’s never too early to carve out your vision,” he says.  He points to protein degradation as an example. Originally discovered in the 1980s, it became a plausible theory that’s just now starting to be validated with real human data.

“You need to have a credible story around it, with development and de-risking strategies. That’s what separates the weak from the strong. We see so many young companies developing interesting things, but where do they fit on the competitive landscape?” he asks. Again, he points to an example. “When you look at checkpoints, there's an increasing prevalence of innovative activities around common targets, reflected in the capital aimed at the space. And now, with 14 approved checkpoints, I don't have enough fingers to count them anymore. They’re commoditizing brilliant science. That’s good for patients, but for the business of biotech, you're cannibalizing really, really good science. It’s not just about the clinical data, it’s about the economic data. That's why I think it's almost easier to sell the vision and the dream early on, but you need to have a plan.”

Is Your PR Machine Over Revved?

There’s nothing wrong with selling the dream, unless it’s a dream of the pipe variety. Many a well-funded, and even well-intentioned biopharma has seen its demise at the hands of blatant spin or inflated promises made too far in advance of proven data. Shaw offers advice on maintaining momentum, energy, and morale while keeping it real on results. “It’s all about finding the right balance. You need to ask questions like why would someone invest in us, and why should anyone care, and you need an answer when they say, why can't I just come back to you in a year?”

Shaw says creating interest in your company’s hypothesis requires the navigation of gray. To find its darker shades, he suggests regular meetings with the FDA to entertain its feedback on study designs and lend credibility to your timelines. “Articulate why you’re doing your studies, run killer experiments and use the right animal assays. People often keep these things going because they don’t want to know the answers, because they know that if they have the answers, they’re out of a job,” he says.

Harkening back to the aforementioned point on HR decisions and jockeys, Shaw suggests the value of both scientific talent and fundraising talent as both a competitive differentiator and a means to ensuring your credibility remains intact. “Bringing in people who have seen it and done it before helps to validate your proposition. Those who have done it successfully have often done it multiple times. There’s an element of trust in their presence. Having those people at your cap table will lower your cost of capital, and getting back to the science, create the presumption that they’ve already kicked the tires and bought into the hypothesis.”

“There are some real tensions in the whole dialogue, but at the end of the day, your credibility is priceless. You can't put a price tag on it. You can't put buy it back, and it’s almost impossible to remediate credibility once it’s lost. So don't get too far in front of your skis. If you do, it generally ends poorly.”

These are just a few points from the nearly 50 minutes of free wisdom and advice Allan offers on episode 62 of the Business of Biotech podcast. Tune in and subscribe for more!