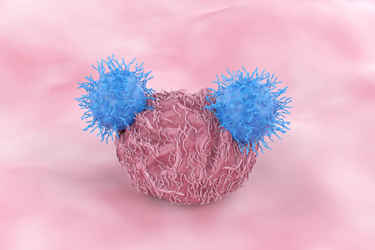 The application of CAR T-cell therapies in solid breast and ovarian cancer tumors has been fraught with historical obstacles. In the simplest terms, it's been hard to encourage CAR T-cells to migrate into tumors, and equally, if not more difficult to keep them alive long enough to go about their work killing tumor cells. CAR T-cells face a gauntlet of immunosuppressive cells surrounding most tumors – those cells intent on taking them out before their work begins.

Advancing prophylactic cancer vaccines to human clinical trials success has been equally challenging. To date, inhibiting the occurrence of breast and ovarian cancers has meant subjecting women to the physical invasion and emotional disruption of mastectomy and hysterectomy.

Progressing cancer vaccines and CAR T-cell therapies for solid tumors to clinical success has proven a tall order, but Dr. Amit Kumar is undaunted. As CEO at Anixa Biosciences, a clinical stage biopharma company focused on treating and preventing breast and ovarian cancers by way of its development of cancer vaccines and novel CAR T-cell therapies, Dr. Kumar points to two key drivers of his company’s belief that these obstacles must—and can—be addressed.

First, there’s the enormity of the unmet medical need. Breast cancer is the most common malignancy in women. Ovarian cancer treatment options are few beyond surgery and/or chemotherapy. Equally important to the company’s timing, says Dr. Kumar, is the readiness of breast and ovarian cancer prevention and treatment technologies. He joined us on a recent episode of the Business of Biotech podcast to discuss those advances.

“We’re working on vaccine technology that’s been the subject of research for over a decade, and we feel it’s ready for clinical trials and commercialization,” says Dr. Kumar. “Any physician will tell you that if she can prevent disease, that's much better than waiting until the disease occurs and then trying to treat it. We found a situation where some very innovative researchers at the Cleveland Clinic developed these approaches to try and vaccinate women against contracting ovarian and breast cancer. We're very excited to be working with our partners there to take these technologies into clinical testing and eventually to commercialization.”

Dose escalation in the phase 1 trial of Anixa’s breast cancer vaccine is currently underway in partnership with the Cleveland Clinic and the U.S. Department of Defense-Breast Cancer Research Program.

Unlike traditional prophylactic vaccines, the work done in cancer vaccines has largely been therapeutic—whereby cancer has been diagnosed in a patient and the vaccine introduced in an attempt to induce an immune response against that cancer. Dr. Kumar says nearly four decades of work in that area have proven unsuccessful. “We believe that once a tumor comprised of trillions of cells has gained critical mass, it’s created a very immunosuppressive tumor microenvironment that make it very hard for the immune system to battle that tumor,” he explains. That’s why Anixa believes a more traditional vaccine prophylactic, or preventative vaccine, has some advantages. “Cancer begins as one cell and multiplies until it becomes a trillion-cell mass. If we can destroy those cells early—at the 2, 4, or 8-cell stage, for instance—then we can inhibit them from gaining enough critical mass to become a tumor.” Anixa’s prophylactic vaccine candidate is designed to target a specific protein that shows up on cancer cells and train the immune system to destroy them. It’s worked in animal studies.

In addition to testing the vaccine’s safety profile and monitoring immune biomarkers for activity against the target protein, the trial seeks to monitor the breast tissue of women who have had preventive mastectomies due to mutations in their BRCA1 an BRCA2 genes.

In a separate phase 1 trial announced in March in partnership with the Moffitt Cancer Center, Anixa will be analyzing its CAR T-cell candidate for ovarian cancer, licensed via a collaborative research agreement with the Wistar Institute. “CAR T therapy has done some pretty amazing things for certain leukemias and lymphomas, but despite many approaches to address solid tumors, it hasn’t worked at all in any clinical setting,” admits Dr. Kumar. “While we've got several good animal studies showing CAR T can address solid tumors, no one has been able to make it work in human beings in any effective manner.” The theories behind why the approach has failed include the aforementioned challenges associated with trafficking the therapy in the tumor microenvironment, but Dr. Kumar believes that nuances about Anixa’s CAR T technology will drive its success in solid tumors.

Keys among those nuances are that Anixa’s candidate targets a protein that is exclusive to the ovaries. Since the target is a hormone (chimeric endocrine) receptor, and the target-binding domain is derived from its natural ligand, Anixa’s technology is known as CER-T (chimeric endocrine receptor T-cell) therapy, a new type of CAR-T. “When we target our CAR T-cells against this protein, we know it will focus entirely on the ovaries and it won’t be targeting cells in other organ systems,” explains Dr. Kumar. Additionally, recent research into this target protein has revealed that it’s also expressed in the vasculature of ovarian tumors. As such, Anixa designed its CAR T-cell therapy to attack both ovarian tumor cells as well as the blood vessels within the tumor. “We're destroying the tumor from the inside and from the outside, and those are mechanisms of action that have never been seen in CAR T technology,” he says.

Dr. Kumar shares much more on his company’s work with the Cleveland Clinic and Moffitt Cancer Centers, as well as Anixa’s manufacturing and commercialization strategies, on episode 87 of the Business of Biotech podcast.