Building A Pipeline On Computational Biology 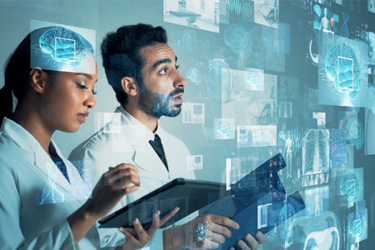 William Greene, M.D. took the CEO’s post at Fountain Therapeutics last Spring, having served on its board since November 2020. The company, founded in 2018, takes what it calls a “target-free, hypothesis-free” approach to drug discovery. The first asset it developed wasn’t, like many biopharma startups, a novel molecular entity. Instead, it was a comprehensive computational tool designed to discover them. Dr. Greene joined me for a discussion about that tool on episode 86 of the Business of Biotech podcast.

Upon Dr. Greene’s appointment, the company was in raw startup mode. It was an idea, backed by intellect and capital, but lacking experienced executive leadership to crystallizes its path to the clinic. “I joined an amazing group of really dedicated, young, plucky scientists who had taken some of the audacious ideas about how to develop a screening platform for drugs that can rejuvenate cells and reverse cellular aging out of the academic lab and reduced it to practice in a rigorous industrial lab setting,” says Dr. Greene.  The company of about two dozen employees is comprised of about half data scientists and computational biologists and half laboratory-based cell biologists. It was the culture of congruency among these multidisciplinary staffers that attracted Dr. Greene to the opportunity. “Unlike some efforts where those disparate scientists speak their own language and operate in isolation, the culture at fountain is one of intense collaboration and deep sharing and creativity between all the scientists,” he explains. “The cell biologists are suggesting computational approaches to their data and the data scientists are really informing the kinds of experiments our cell biologists do.”

His immediate goals were twofold; to develop an executive team with the biotech experience necessary to grow the company into its vision of being a discovery and development company, and to align that team toward getting drugs into the clinic.

More traditional drug discovery follows a well-traveled path. A potential drug target is identified in an academic or industrial lab, often the output of basic research conducted in academia. Biologic targets, proteins, receptors, or pathways that look interesting are studied to determine their role in certain diseases. Over time, a pharmaceutical or biotech company may further explore that target to determine if drugging, inhibiting, or in some cases enhancing it could help with disease. “Sometimes that works, and when it works, it works great,” says Dr. Greene. “It really works well when you know the enemy. In an infectious disease, when you know the pathogen that you're trying to inhibit, you know how to hack it. To some extent, even in cancer, when you know what the cancer cells are doing, you can imagine several ways to inhibit those cells or kill those cells,” he explains.

The problem with chronic diseases of aging, says Dr. Greene, is the time they take to develop. It's not necessarily clear exactly what the steps are in the development of that disease. “Picking a target and assuming that it’s going to be the right one is a little bit like drilling for oil by drilling one hole in the sand and hoping you strike gold,” he says. “Our approach surveys the entire landscape of the cells as they age, and asks, can we intervene? Can we reverse the loss of vibrancy, the loss of resilience of cells to the various slings and arrows associated with aging?

Central to that approach is the company’s development of a unique and proprietary age classification system for primary cells, a much different take than traditional approaches to phenotypical drug screening. “If we determine that we can intervene, then we're able to turn the light on the whole field and not just drill individual holes,” says Dr. Greene. With this approach, Fountain believes it presents a more efficient way to find multiple new ways to intervene in the chronic diseases of aging without having to know which target it’s pursuing from the start.

Dr. Greene surmises that with increased lab capacity and efficiency, the volume of tests Fountain can run will expand exponentially. “Those individual tests, or perturbations, are an important metric,” he says. An equally important metric is whether the compounds being screened are yielding “hits” worthy of follow-up in the lab. “We started with a very small set of molecules that we were able to screen in our platform. We quickly advanced to screening an 8,000-compound library and found that we had a couple hundred interesting hits that we've then prosecuted in animal models, producing some potential candidate leads. We've since scaled that up, and just completed a 50,000-compound screen with proportionally more potential drug targets to explore.”

Let’s get back to that point about metrics. Fast-throughput screening is valuable, but there’s no end game if every compound screened gets knocked out. You can’t make a good movie from the film that hits the cutting room floor. “You have to fail fast and fail cheap in order to focus on what may actually create value,” admits Dr. Greene. “The vast majority of the 8,000-compound library we initially screened were not interesting to us, but a couple hundred were,” he says. Those potential hits are re-queued for ex-vivo dose response and other studies using imaging and robotics tools, again, in the name of efficiency. “Only when we get to a series of compounds that we’re really interested in do we turn to animal work,” says Dr. Greene. The company has developed an adapted mouse model of accelerated aging, so that it can efficiently screen compounds in mice that are born normal, but over a period of just a few months, age across the entire lifespan of the mouse. “In essence, we're modeling 80 years of human aging in six months,” he says.

By treating mice with progeria for a month, Fountain can discern whether its potential drugs are affecting the organs and organ systems impacted by diseases of aging. It’s an unbiased approach to screening compounds in live animals and one that further reduces the company’s hits to those molecules that have a real impact on real organ systems in living animals. “We're now pursuing traditional models of specific diseases in specific organs to shuttle each of these compounds towards a potential development path,” says Dr. Greene.

As Fountain refines its computational approach to drug discovery, and subsequently refines its list of potential candidates, the company will take a hybrid approach to development. “We’ll develop some compounds internally, and we’ll seek partnership with larger specialists in other disease areas,” explains Dr. Greene. To that end, the company’s most recent addition to the executive team came in the form of a chief business officer. It named biopharma veteran Anupama Hoey to that post early this year. “Building this executive team is all about building that focus and making choices. Will we do an exclusive partnership in immunology or an exclusive partnership in neuroscience or cardiovascular disease” The answer is maybe, and that is how we’ll build both breadth and depth,” he says.

Take a much deeper dive into the Fountain Therapeutics approach to drug discovery and development by tuning in to episode 86 of the Business of Biotech podcast.