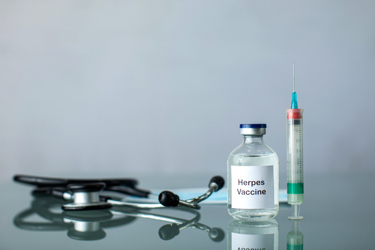 An inside look at preclinical stage biotech, X-VAX, which is preparing to engage the FDA with data on an HSV vaccine candidate that could have therapeutic impact on a virus carried by the majority of the world’s population.

The World Health Organization (WHO) reports that about half a billion people worldwide—including a full 13% of those aged 15 to 49—are living with genital herpes. Several billion more have an oral herpes infection.

Herpes simplex virus type 2 (HSV-2) is almost exclusively sexually transmitted and the leading causing of genital herpes. Infection can lead to recurring, often painful, genital sores in up to a third of people infected.

Herpes simplex virus type 1 (HSV-1) is mainly transmitted by oral-to-oral contact, causing painful sores in or around the mouth. It can also be transmitted to the genital are, causing genital herpes.

HSV-1 and HSV-2 are members of the same family of viruses, and they have no cure. Antivirals can help reduce the severity of symptoms and the frequency of recurrences, but they cannot cure the infection, and global access to them is spotty at best. The fact that genital herpes is associated with a 2- to 3-fold increased risk for HIV infection exacerbates the problem. Further, it’s particularly dangerous to newborns, as babies exposed to the virus during birth can suffer brain damage, blindness, or even death. Despite being carried by some two-thirds of the human population, it’s a virus the medical community has yet to conquer and one that few people like to talk about.

Their enthusiasm for addressing the HSV endemic isn’t the only thing Wolf and Abraham have in common. Prior to their joining X-VAX last summer (Abraham in June and Wolf in September), they were both principal consultants at Tunnell Consulting, where they both worked on the X-VAX account.

They also both bring big-league experience to X-VAX. Wolf started a 25-year management consulting career in vaccine launch and GMP manufacturing, during which he also temporarily held various leadership positions at some of the world’s top life sciences companies. Wolf temporarily worked inside Wyeth pre-Pfizer merger and inside Merck post-Schering merger. In both cases he led business process management (BPM) groups — in Wyeth’s manufacturing division and in Merck’s R&D division. Abraham managed cell biology services at Centocor (now Janssen), was VP of Regulatory Affairs at VaxInnate Corp., served as Director and TA Head, Adjuvanted and Pandemic Influenza Vaccines, US Regulatory Affairs at GSK, and worked in technical, quality, and regulatory roles at Merck. She spent a combined 24 years with the last two, and most of her career has focused on prophylactic vaccines.

“HSV has been an elusive target for an effective vaccine,” Abraham admits. “X-VAX is approaching it with a completely novel technology.” At the center of that approach is the elimination of the immunodominant glycoprotein D (gD-2) on the surface of the herpes virus. X-VAX researchers hypothesized that deleting the gene that encodes gD-2 from the virus could stimulate the body to produce different, more effective antibodies. In preclinical models, that’s exactly what’s happened.

The resulting vaccine candidate ∆gD-2 protects against both HSV-1 and HSV-2 via Fc receptor activating antibodies that mediate antibody-dependent cytotoxicity as the primary mechanism of protection—flagging infected cells for destruction by natural immune cells. Previous attempts have induced a response that elicits primarily neutralizing antibodies that attach to free floating virus. But because the virus can still move and spread cell to cell, it is able to evade neutralizing antibodies, resulting in persistent viral reactivation.

In those pre-clinical models, the vaccine both prevented disease and prevented the virus from establishing latency, a hallmark of herpes that allows the virus to remain dormant in nerve tissue in between outbreaks. While the initial goal is to evaluate ∆gD-2 as a prophylactic vaccine, its mechanism of action demonstrates the potential for a therapeutic vaccine effect as well.

A Nimble, “Virtual” Effort From X-VAX

Wolf and Abraham are recent additions to a virtual team approach at X-VAX. Its executive management team is distributed, and it works with a network of consultants (including Tunnell), CDMOs, and CROs on development, processing, and production of its candidate. That made it a perfect move for both Wolf, whose work at Tunnell focused on outsourcing models and dynamics, and Abraham, whose career has been devoted to vaccine development.

The virtual approach, says Wolf, gives the company the agility necessary to tap into resources and people who know what success looks like. “A very small percentage of development projects make it to the clinical stage, and an even smaller percentage see the light of commercialization,” he says. “The technology matters, and a lot of the failures have to do with people not understanding true development space. What we have here is a combination of people with deep commercial experience, so we're beginning the IND stage with the end in mind.”

COVID-19 Proves A Blessing And A Curse To Vaccine Manufacturers

Wolf credits the COVID-19 pandemic with creating an environment in which knowledge—and pseudo-knowledge—of vaccine manufacturing and mechanistic action is so widely discussed, understood, and misunderstood. “There hadn’t been a lot of activity on the vaccine front prior to 18 months ago. Now that vaccines are household conversation, the industry is getting more attention, which is bittersweet. Everyone speaks the language, and suddenly we have millions of backseat immunologists and epidemiologists with voices,” he says. Wolf is also nervous about the long-term impact of what he characterizes as an entire economy built on the pandemic. “There’s a measurable propensity for fraud and counterfeiting now, particularly in the supporting components of vaccine and therapeutic products and the tertiary services and products such as PPE. It’s created labeling and information management challenges across the life sciences, and in the therapeutic and med device spaces in particular.” Those challenges are compounded by biopharma material and equipment supply shortages resulting from limited production and logistics capacity during lockdowns, during a time when manufacturer’s demand for those materials and equipment has surged in response to the pandemic.

Embracing Risk Where Failure Is The Standard

Though they’re in the limelight now, vaccines are proven to be risky business, even when they work. There are anthologies written about scientifically-sound, commercially approved vaccines that failed at the hands of public perception and misinformation. Even more volumes cover the scientific complexities that couldn’t be overcome by the best of makers’ altruistic intentions. Wolf and Abraham acknowledge the risk on both the scientific and marketability fronts. Prophylactic vaccines have a higher bar for safety than therapeutics, says Abraham. Therapeutics treat and may cure an existing condition. Prophylactic vaccines are given to an otherwise healthy population.

But the market potential of a herpes vaccine—and beyond that, an efficacious herpes therapeutic—is backed by the prevalence of the disease and its physical and psychological impact on patients.

Wolf says X-VAX has taken a cue from the success of Merck’s HPV vaccine Gardasil 9, which isn’t marketed so much as an HPV prophylactic as it is for the prevention of HPV-caused cancers. “When Gardasil got the indication for males, in particular, they weren’t talking about prevention of STDs. They were talking about prevention of head and neck cancers,” he says. That broadens the application, and X-VAX sees a similar go-forward plan. “In and of itself,” says Abraham, “genital herpes infection affects quality of life, both physically and emotionally. But herpes encephalitis in infants and HIV do kill.  Preventing and treating herpes can have a profound impact there.”

X-VAX’ Path To The Clinic

At present, on the heels of a $56 million Series A round, X-VAX is working to demonstrate the safety and efficacy of its candidate as a prophylactic to prevent both HSV-1 and HSV-2, and as a therapeutic. “As a therapeutic, we hope to demonstrate that people who are already infected and who have frequent occurrences of active disease will benefit from the therapy’s ability to manage, if not eradicate it altogether,” says Abraham. “That’s what drives us. Filing the IND will be a milestone, but it’s the planning for and the content of that IND that will allow us to be in the clinic 30 days later. We requested – and received – early feedback from the FDA on our preclinical plans. We’re conducting the development work now and will present it in the IND coherently. It’s only logical that if you need the FDA’s agreement to move forward, you should present your case clearly and efficiently to facilitate their decision.”

As for X-VAX’s regulatory path, Abraham says she’ll lean on the experience she gained in negotiating IND filings for vaccine candidates in big pharma and in biotech. “That’s not to say that I know how the FDA thinks; that would be arrogant. But I do understand how they approach things and how to build an effective professional relationship with them.”

Abraham says a key to understanding FDA’s approach is comprehending both the letter of the law and its intent as well as careful consideration of the guidance documents the agency promotes. “Those guidance documents are the most important portion. They represent the current thinking of the people whose concurrence you need to move forward. So, demonstrate that you know your science in that context. Engage with the FDA, listen to their feedback and respond responsibly, That's the best path forward.”