Application Enhancements For The HyPerforma S.U.B. 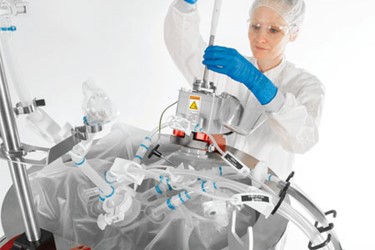 Increased demand in the field of biotherapeutic manufacturing has resulted in the need for bioprocess developers to provide more product yield at lower production cost, to decrease the time required to bring new therapies to the patient, and to consistently manage operational risks. These trends are leading to increased focus on three key areas of advancement: continuous manufacturing, intensification of the bioprocess unit operations, and expanded utilization of single-use technologies. For animal cell culture processes, the reliance upon a bioreactor as the heart of the upstream operations has necessitated the improvement of these unit operations.

Because bioreactors are inherently time- and cost-intensive operations that are susceptible to contamination or control failures, the industry has sought to simplify operations and move toward single-use options to reduce cleaning and verification costs, as well as time lost between cultures. With the advent of robust polymer films, single-use bioreactors (S.U.B.s) were developed to primarily replace seed train operations and assist in process development. In 2006, the first 50 L and 250 L stirred-tank S.U.B.s were launched, more closely representing traditional stainless steel reactors and ultimately giving a design guide for further buildup to the current 2,000 L scale that most manufacturers strive toward having in their operations unit.

When S.U.B. designs were first developed, end users were only looking for the ability to replicate simple growth conditions seen in stainless steel operations, where cell densities, product titers, and overall system demands were much lower than those achieved today.

Niche operations such as low-turndown operation, perfusion, and adherent cell culture were dealt with on a case-by-case basis. However, with many end users now demanding streamlined operations, high-density culture in fed-batch modes, even higher production by perfusion cultures, and contrastingly gentle operations required in microcarrier applications, standard S.U.B. offerings must keep pace with the ever-evolving needs of the bioprocessing industry.