An Inhalable mAb For COVID-19? 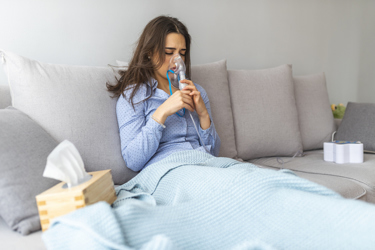 An at-home, self-administered, inhalable COVID-19 therapeutic is in the works. Given recent transmission spikes, troubling immunity data, and skepticism of a timely vaccine, it might be a critical tool in the effort to flatten the second curve.

Aridis Pharmaceuticals founder, CEO, and Director Vu Truong, Ph. D. doesn’t think the 8,000 milligram dose of Regeneron’s SARS-CoV-2 Virus Multi-Antibody Therapy (REGN-COV2) given to President Trump is a practical approach to treating the millions affected by the disease. “That’s an incredibly expensive dose to manufacture considering that less than 1% of the medicine will actually make it to the lungs, where the infection resides,” he says, estimating the cost to manufacture at around $1k.

That’s why his company is bringing a nebulized mAb biologic therapy called AR-711 to the fight. The therapy is derived of convalescent patients from those who have survived the disease. It’s directed against the conserved receptor-binding domain region of the original SARS-CoV2 virus and its newly emerging variants, including the currently prevalent strain G614. Aridis says AR-711 exhibits high affinity for SARS-CoV-2 spike protein, claiming approximately 10-fold or higher affinity than mAb candidates currently in late-stage clinical testing.

Dr. Truong’s vision is one of a self-administered therapy for anyone carrying the disease, whether symptomatic or not. “Curtailing the spread of the disease requires addressing the lack of treatment coverage among the more than 90% of positive cases that don’t require hospitalization, and equally importantly, among those who are positive, but exhibit no symptoms,” he says. “They’re not getting treatment, and we believe they should be.” But reaching such a large population—millions and growing—of people carrying the disease, he says, will require a significant lowering of the barriers to treatment. He anticipates some pushback on the concept of at-home, self-administration of an inhalable mAb, but he’s confident in the product’s safety profile, claiming it’s no more dangerous than nebulized treatments for common ailments including COPD and asthma.

In any event, clearing barriers isn’t new to Truong. Before founding Aridis, he was a senior scientist at Aviron Pharmaceuticals, a pioneer in the development of the world’s first inhaled flu vaccine (FluMist), which was acquired by MedImmune to the tune of $1.5 billion back in 2001. He continued to work for MedImmune, which went on to develop the world’s first infectious disease mAb (Synagis). That, he says, was when treating infectious disease with antibodies was considered by many a radical idea unlikely to work. Medimmune was later acquired by AstraZeneca for $15 billion.

Aridis is currently discovering and developing mAb candidates via its ʎPEX Technology Suite, which you can read more about here. Dr. Truong says the proprietary platform is helping the company overcome the manufacturing challenges common to antibody manufacturing, such as establishing an antibody gene DNA vector and transferring it to a cell line, which he’s striving for at a faster pace in a COVID-19 environment marked by urgency. “Designing a large molecule that can be effective in a nebulizer from CVS or Walgreens is challenging in that nebulization could denature the drug, creating an elevated risk of immunogenicity,” or unwanted immune response, says Dr. Truong. “Our formulation technology fixes that.” AR-711 is stabilized using a proprietary formulation designed to protect the mAb from the physical stresses imparted by commercial nebulizer delivery devices on protein drugs.

Truong says in animal studies, AR-711 eliminated all detectable SARS-CoV-2 virus at all dose levels tested, the lowest being a lung deposited dose of 0.03 mg/kg. If we assume The Don weighs in around 110 kilograms, a 3.3 mg dose could have theoretically done the trick. Indeed, Aridis’ early estimate is that the efficacious adult human equivalent inhaled dose is somewhere between 2 to 6 mg. That’s a significant difference from the 8,000 milligrams of REGN-COV2 received by Trump intravenously.

What’s more, Dr. Truong says AR-711 is engineered to exhibit 6-12 month half-life, which could continue to protect the patient from re-infection well after the initial episode. Delivered at scale, that term of protection could have significant positive implications on control of the disease.

This isn’t the first time we’ve spoken with a biotech that surmises inhalable biologic therapies will be more effective and cost-efficient COVID-19 therapeutics than those taken intravenously, subcutaneously, or otherwise. Last month, we shared a column in which TFF Pharmaceuticals made the case for dry powder inhalable treatments on the same therapeutic efficiency logic.

Dr. Truong says the market potential of Aridis’ at-home mAb therapeutic candidate is significant, buoyed by public skepticism of the yet-to-be-developed COVID-19 vaccine. “We’ve seen surveys indicating that up to 50 percent of the U.S. population would refuse the vaccine. That statistic, combined with the fact that COVID-19 vaccines will not effective for everyone, demands an effective therapeutic for mild-to-moderate and asymptomatic cases, which are the vector of the disease’s spread,” he says. His case was strengthened when, on the heels of our conversation, solemn news broke of an Imperial College London study of more than 365,000 people in England. That study found that antibodies fell from 6% of the population around the end of June to just 4.4% in September, suggesting that protection from the virus may not be long-lasting and that community immunity is waning.

Ongoing uncertainty over how long immunity might last, coupled with the likelihood that most of the population doesn’t have coronavirus antibodies, support the case for therapeutics as a tool to thwart transmission.

To that effect, Dr. Truong says the company will next evaluate AR-711 in non-hospitalized mild to moderate COVID-19 patients in a global study to be launched in the first half of 2021. Meanwhile, the company is working on a second mAb-based therapy, AR-701, which comprises multiple fully human IgG1s monoclonal antibodies including AR-711, and is intended as an intravenous treatment for moderate to severe, hospitalized COVID-19 patients.