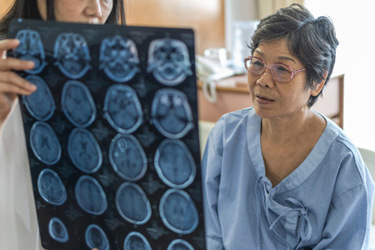 When asked what it’s like advancing a biologic therapeutic for the treatment of Alzheimer’s disease in the wake of the Aducanumab news cycle, RJ Tesi, M.D. cuts straight to the chase. “I think it’s well past time that Alzheimer’s disease gets the attention it deserves,” he says. That’s hard to argue. It’s the sixth most common cause of death in the U.S., and while drugs that address its symptoms have been approved for some patients, there is no cure.

Dr. Tesi is CEO at INmune Bio Inc., a clinical stage biopharma developing immunotherapies that reprogram the innate immune system to help patients fight cancer and Alzheimer’s. We caught up with him for a Q&A on the Alzheimer’s therapeutic scene, and the approach his company is taking to carve out its niche.

BioProcess Online: What’s your take on the FDA’s approval of Aducanumab?

RJ Tesi, M.D.: I think the FDA made the right decision. Historically, there’s been a very real difference in the way the CNS section approached Alzheimer’s when compared to oncology. Look at how many oncology drugs have been approved on very thin data. Why are CNS diseases, and specifically Alzheimer’s, any different? It’s deadly, it’s common, and there are very few approved therapies for it.

I don't think it was necessarily handled in the most graceful way. The FDA didn’t do as good a job as it could have with the subtleties of the approval rationale. But I think the press has been completely out of line. I believe they've misinformed the public in the same way they’ve done reporting COVID-19 infections among vaccinated patients. With COVID19, they don't tell you that that patient just had a positive swab, was asymptomatic, and continued their daily activities. And in the next sentence, they say the Delta variant is causing increased hospitalizations. Ultimately, the press didn’t help patients with Alzheimer’s disease. The FDA did, and there’s now an explosion of new therapeutic programs in development for Alzheimer’s.

BioProcess Online: What about the argument that the data on Aducanumab’s efficacy is thin, at best?

RJ Tesi, M.D.: Perhaps apart from Gleevec for chronic myeloid leukemia, I can think of no other first drug in an indication that was very good but they're better than nothing. The second drug is better than the first drug. The third drug is better than the second drug and down the line. The journey had to begin. It happened to begin with Aducanumab. It looks like we're going to have a fast follower in the Lilly drug donanemab. I think the FDA has clearly taken this fast-track breakthrough therapy approach to heart. They're going to try to make it work, because they know for diseases like Alzheimer's, ALS, and Parkinson's, patients need therapeutics.

It’s also relevant to note that one of the unique elements of Alzheimer's disease is that when you treat a patient, you're treating a family unit. The role of the caregivers is so important, and it’s devastating to their lives as well.

RJ Tesi, M.D.: It's not like anybody's drug therapy, including ours, is going to take someone who has far advanced dementia and reverse it. That’s just not going to happen. We’re aiming to stop progression. That's the goal. Over time, that means the number of severe cases will decrease. The number of patients in nursing homes will decrease. The burden on both caregivers and families will decrease. It won’t happen overnight. But the average lifespan of an Alzheimer's patient from diagnosis to death is seven years without therapy. We’ve got to get started.

BioProcess Online: Aducanumab wasn’t the first monoclonal antibody developed to remove amyloid plaque in the treatment of Alzheimer’s, it was just the first to be approved. Others, including Pfizer’s bapineuzumab, Eli’s solanezumab, and Eisai’s Lecanemab have failed. Why this relentless pursuit of a mAb targeting Amyloid Plaque?

RJ Tesi, M.D.: This is not the company speaking, this is my personal opinion. I think tau is going to go down the same road. First, I believe that amyloid as a target stinks. Neither amyloid nor tau are the first stop on the train. They're nearer to the end of the pathology of Alzheimer’s. There's no question that these antibodies lower the amount of amyloid, but amyloid in itself doesn't cause synaptic dysfunction or neuronal death. We believe it is the consequences of the inflammatory response to the amyloid that causes synaptic dysfunction. We believe a more direct path in treating AD is to go after neuroinflammation.

Here is an example of why amyloid is not an ideal target.  Fifty percent of elderly people with normal cognition have amyloid in their brain. There's no question that figure is higher in patients with dementia (70%) and Alzheimer’s (100%), but there’s more going on that just amyloid. I think people got stuck on the idea that if 70% of dementia patients and 100% of Alzheimer’s patients have amyloid, that must be the problem. It’s certainly part of the pathology, but pathology and causality are two different things.

In the 115 years since Alzheimer’s disease was named, many people have declared amyloid a biomarker. Our company is very invested in biomarkers. We believe in them. But the presence of amyloid does not correlate with the presence of Alzheimer’s disease. It’s not a biomarker, it is part of the diagnosis of the disease. Almost 40 years ago when I was in medical school, there were two types of breast cancer: hormone positive and hormone negative. Full stop. Today, there are at least 6 different types of breast cancer, and each one is treated differently. Why should we assume that there’s only one type of Alzheimer’s disease, a disease defined in 1906?  There are multiple pathologies going on, and today’s development landscape for Alzheimer’s disease is reflective of that. There are anti-amyloid, anti-tau, anti-inflammation, lysosomal, mitochondrial dysfunction and glucose sensitivity candidates in development, and the list goes on.  Casting a wide net will help bring solutions to the bedside for this complex disease.

BioProcess Online: What does this plethora of candidates and modalities mean from a development and clinical trials perspective?

RJ Tesi, M.D.: To assume that everyone has the same disease may be a bit naive. One of the best practices of oncology drug development is the “patient enrichment” design of a clinical trial. They ask, ‘what does my drug do?,’ then only pick patients on whom their drug should work. This allows them to have a positive trial with a small number of patients. This is a strategy that we've embraced. Our phase 1 trial of XPRO1595 has four enrollment criteria to predict patients with neuroinflammation. That is, we were enriching the trial to only include patients with neuroinflammation. Giving the drug to a patient that doesn't have neuroinflammation is akin to giving them a cup of coffee. If there’s no neuroinflammation, we don't have the connection between the pathology of the disease and our therapy. We do not expect a patient without neuroinflammation to respond to XPRO.

This type of enrichment strategy is one of the reasons Lilly is confident in its Alzheimer’s candidate donanemab. The difference between the Lilly trial and the Biogen trial is that Biogen took all comers that had amyloid. Lilly took those with amyloid and a certain tau level. And as a result, they saw a positive retrial with just 263 patients. We believe wholeheartedly in biomarkers, and we are utilizing some very interesting ones that nobody else uses.

Finally, we must address endpoints. The ADAS-Cog-13 [Alzheimer’s Disease Assessment Scale] stinks. Patients with early AD have a ceiling effect in 9 of the 13 metrics in the ADAS-Cog13. There are only 4 elements that can be used to measure response.  his is a very blunt instrument to measure a very subtle response. When you have lousy endpoints, it’s hard to have a positive trial. You often need to leverage other tricks, enrichment strategies, big numbers, or lighting candles at your local cathedral. We're using EMACC [Early AD/MCI Alzheimer’s Cognitive Composite], which is a composite of five or six different scales, and it's very sensitive for measuring changes in cognition in MCI [mild cognitive impairment] and early AD. The Phase II trial we have designed will focus on mild AD patients. Trying to use the ADAS-Cog-13 for patients with mild AD is a loser's game. Furthermore, EMACC can measure improvement in cognition, something that is very difficult to do with ADAS Cog13.

The clinical development community that's focused on Alzheimer's disease and other CNS diseases is learning that the old way of doing CNS clinical trials just doesn’t work anymore. As a result of that learning, you're going to begin to see better designed trials. They're going to look a lot more like cancer trials, using biomarkers and all the best practices developed for oncology. Combine these changes with the new approach to CNS drug approval by the FDA and there will be more drugs approved in CNS.

BioProcess Online: Where is XPRO1595 right now in its clinical journey?

RJ Tesi, M.D.: We were sort of “forced” into Alzheimer’s disease when the Alzheimer's Association recognized us with a Part-The-Cloud award. When we received the award in 2019, Alzheimer's disease was still a bit controversial. What a difference two years make!  Now, we’re in one of the hottest areas of biotech. We are very comfortable with the results of our Phase 1 trial. The trial was designed to teach us about how the XPRO works in AD patients to decrease neuroinflammation and demonstrate the downstream benefits of decreasing neuroinflammation on synaptic function and neurodegeneration.  ll these insights informed the design of our Phase 2 trial. The Phase II trial will be a 200-patient blinded, randomized, placebo-controlled trial. The treatment phase will be six months, and the primary cognitive end-point will be EMACC. It's very important to have that placebo control, because neuro and CNS diseases have a huge placebo effect. We’re planning to enroll our first patients in the fourth quarter of this year. Soon, we’ll be working on the dosage and delivery technologies in preparation for pivotal trials, as well as studying combination therapies. Finally, AD is just the tip of a very large iceberg using XPRO to treat neuroinflammation. Neuroinflammation is a “base” pathology in many diseases such as MS, PD, ALS, depression, TBI, autism and more. When we spend a dollar on Alzheimer's disease, we are decreasing the cost and risk of clinical trials in the other diseases such as ALS and treatment resistant depression and several other CNS indications. We like our drug. We like CNS. We believe the future is bright.

BioProcess Online: Has the approval of aducanumab caused you to re-examine or adjust your regulatory strategy for XPro1595?

RJ Tesi, M.D.: We haven’t made any adjustments based on the aducanumab ruling itself, but we’ve taken regulatory trends in general into account. For instance, Lilly executives have expressed confidence in an approval of donanemab based on what they have at hand, and they have two things at hand: the positive phase two data with a small number of patients [138] that showed almost the same amyloid reduction results as aducanumab, and solid safety data. Remember, the FDA has four jobs: one is safety, two is safety, three is safety, and four is efficacy.

If in fact this ball keeps rolling down the hill, then we’ll absolutely adjust and take advantage of this new, shall we say enlightened positioning of the FDA. I don't say that in a negative way, I mean it in the most positive context. I believe one of the great hurdles for getting CNS drugs approved has been this one-size-fits-all pursuit of perfection. If the CNS section of the FDA has moved to the same kind of principles that are used in oncology, it's going to mean great things for companies working on CNS therapies and patients alike.