Accelerated Manufacturing Of Subunit Vaccines For A Rapid Pandemic Response 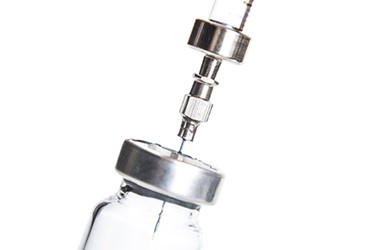 A robust pandemic response and biodefense strategy is necessary to protect the public health in case of a national security threat. To support the United States government mission to protect the United States and its military personnel by quickly responding to novel threats, scientists from Cytiva's Fast Trak Services (previously Xcellerex™) and a team of partners worked with the US Department of Defense to develop a platform for rapid manufacturing of critical protein-based therapeutics that are essential for the military. This application note describes a process for rapid production of recombinant anthrax protective antigen (rPA) in short process time for the manufacture of an anthrax subunit vaccine. Histidine-tagged rPA was produced in Pseudomonas fluorescens grown in the singleuse Xcellerex XDR-50 MO fermentor system. The produced fusion protein was captured directly from crude extract using immobilized metal ion affinity chromatography (IMAC). After an additional purification step, using hydrophobic interaction chromatography (HIC), the histidine-tag was proteolytically cleaved off and removed by subtractive IMAC. Using the described process, rPA could be processed to a purity of more than 99% at a recovery of about 40% in about 12 h from cell harvest to purified rPA. The described process was developed within the Accelerated Manufacture of Pharmaceuticals (AMP) program funded by the Defense Advanced Research Projects Agency (DARPA)/Defense Threat Reduction Agency (DTRA).