What's The Environmental Impact Of Biopharma Continuous Manufacturing? Part I 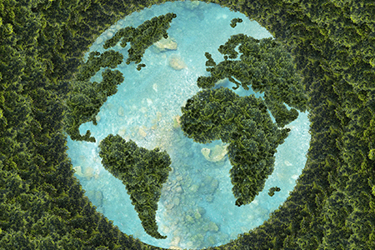 Continuous manufacturing offers many enticing opportunities for the future of biopharmaceutical manufacturing, from higher efficiency to lower costs to improved scalability of the process.1 Many new and exciting technologies are being investigated for both upstream production and downstream purification of biologics in the continuous format.2 While there are currently no fully continuous processes for commercially available biologics and many technical challenges remain, there have been many successes both in the use of perfusion bioreactors as well as strategies for downstream unit operations performed in the continuous format.1, 2 Beyond the technical challenges of converting a biomanufacturing process into a fully continuous process, there are other challenges for implementing this technology, ranging from risk adversity (e.g., not wanting to assume the risk of converting a functioning batch process to a continuous process) to regulatory uncertainty, to data analysis and integration challenges.

One aspect of biopharmaceutical continuous manufacturing (BCM) that is often overlooked is its environmental impact compared to that of a similar batch process. It is well accepted that manufacturing choices can have a direct impact on the environment and the health of the planet,3 and while some efforts have been made to quantitate the direct impact of biopharmaceutical manufacturing on the environment and compare batch vs. BCM processes, there is still much that needs to be considered.4-8 A thorough review of this topic is necessary because the current fractured understanding of the impact of individual components of BCM systems could result in misinformation regarding its effect on the environment. For example, the heavy reliance on disposable manufacturing equipment (single-use technologies, or SUT) in BCM processes can create the impression that they are less sustainable than comparable batch processes, even though consumables are only a small part of the overall environmental impact.5 In this two-part series, we will explore some of what has been published regarding the environmental impact of fixed-facility batch manufacturing processing as compared with flexible facilities using BCM processing, using monoclonal antibodies (mAbs) as the example (Figure 1). 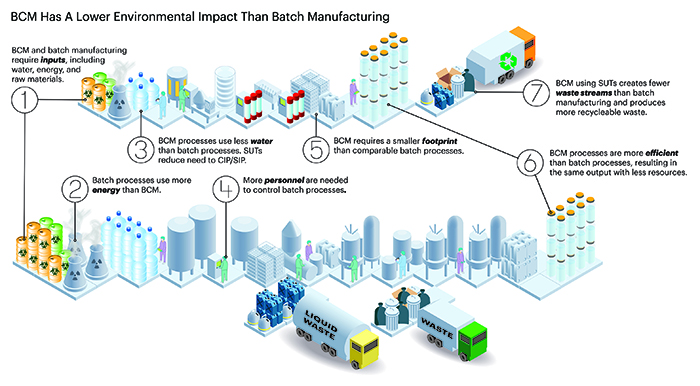 Figure 1. The top figure depicts a BCM process using SUT, while the bottom figure depicts a similar output fixed-facility batch manufacturing process for a mAb. Icons are meant to represent the amount of input and output for the processes, including materials, energy, water, final product produced, and waste streams. (Figure by Mark Verdecia of USP.)

Measuring The Environmental Impact Of A Manufacturing Process

Biological manufacturing processes using fermenters or bioreactors have significantly higher PMIs than processes used to make small molecule active pharmaceutical ingredients (APIs).4 An average small molecule API process has a PMI of 100 to 200 kg/kg.,5 while it is estimated that, on average, 7,700 kg of input is required to produce 1 kg of mAb output.4 This input includes the water used to make media and buffers, raw materials, and any other consumables used in the manufacturing stream. A weakness of PMI as an assessment of environmental impact, however, is that it does not take into consideration other factors not directly used in the manufacturing stream, like water used for cleaning equipment, electricity used to power the facility, or the waste generated by the process. Therefore, additional metrics are needed to account for these environmental impact factors.

Water is the single greatest contributing factor to the environmental impact of a batch biomanufacturing process. Water usage in biologics is >100-fold of that used in small molecule manufacturing and can be responsible for >90% of the PMI of a such a process.4, 7 It has been estimated that a typical 20,000-L batch-based mAb production facility can use more than 1.5 million gallons of water in a year.8 By far, the chromatography steps of the downstream purification operations directly consume the most water in a manufacturing process.7 Indeed, one study calculated that all chromatography steps in a monoclonal antibody production process consumed 62% of the water used in the process and that by reducing the number of chromatography steps from three to two, the PMI of the process could be reduced by over 50%.4 In terms of upstream production, the media for cell growth (which can be tens of thousands of liters in a large-scale facility) comprises the majority of the water directly used in this part of the process. This upstream water usage is exacerbated by the steam heating used to maintain the growth temperature of many bioreactors. The second greatest contributor to the direct use of water in the upstream process is the seed train/bioreactor, which accounts for 18% of the total PMI due to water use.4 Furthermore, increasing the size of the bioreactor does not necessarily lead to a reduction in in overall PMI, as the trend is toward higher PMIs with larger-scale production vessels.4

Beyond the direct contribution to the PMI of water used in production of biologics, there are also considerable amounts of water used to clean and sterilize the equipment used in batch manufacturing. Stainless-steel multiuse equipment requires extensive cleaning between batches or campaigns, which then must be followed by steam sterilization (CIP/SIP). The cleaning process requires large volumes of various cleaning agents followed by multiple water rinses. This is then followed by more water for steam sterilization. CIP/SIP operations dominate the water usage requirements of stainless-steel facilities, contributing to up to 40% of the GWP and CED of the process.4, 6, 7 Biologics manufacturing processes also use water for injection (WFI), which is highly resource-intensive to produce. Municipal water is softened, filtered, and then subjected to reverse osmosis. This is then followed by UV light treatment and continuous deionization to produce purified water that is then subjected to distillation to produce WFI.4 One study used a conversion factor of 1.41 to calculate the PMI contribution of WFI as compared with municipal water, i.e., 41% more resources are required to produce WFI as compared with the water coming into the facility, and batch processes tend to use more WFI than equivalent BCM processes. 4

BCM processes generally require less water than batch processes. In a head-to-head comparison of a 25-L batch mode process and a 25-L continuous mode process, buffer volumes were significantly reduced in the BCM process. For example, a Protein A capture step in the BCM process had 95% reduced resin volume and 44% less buffer consumption than the equivalent batch operation. 9 Flow-through chromatography, a process step very amenable to continuous operations, can also greatly reduce buffer utilization by eliminating the need for washing and elution of the chromatography matrix.1 The use of membrane chromatography, rather than more traditional resin column chromatography, can further reduce buffer use in a process, and BCM processes are well suited for the use of membrane chromatography technology.2 In fact, some unit operations in BCM may consume 90% less buffer than an equivalent batch operation.2

There can be a trade-off in water use for a BCM process vs. a batch process when it comes to the upstream production process, however. Perfusion bioreactors, as used in BCM, need more media than batch reactors, but this can be offset by media optimization and the use of perfusion bioreactors in the N-1 stage (N-1 perfusion refers to the intensification of cell growth in the step prior to the production bioreactor (N)) that increases the density and shortens the culture growth phase.1, 8 Seeding the production vessel with a higher inoculum of cells from the N-1 stage allows the cells to achieve optimum density and maximize production of the mAb more quickly in the production reactor (N), thus saving time and media. The final step in a BCM mAb process may also have distinctly higher buffer consumption than used in standard batch diafiltration, thereby somewhat reducing the environmental advantage of BCM.2 As discussed in part 2 of this series, BCM is amenable to single-use technologies (SUT) that have the added environmental advantage of not requiring CIP/SIP activities, further reducing the overall water consumption of the process.6, 7 As also discussed in part 2, BCM processes can have greatly increased capacity and process efficiency as compared with batch processes, and these factors are inversely proportional to water use. The more efficient the process, the less water is required to produce a kg of final product. When considering total water consumption of the process, BCM using SUT can greatly reduce the use of this precious resource and the overall environmental impact of the process as compared with fixed-facility batch manufacturing.

Due to the importance of BCM to the future of biomanufacturing, the United States Pharmacopeia (USP) and BioPhorum are organizing a joint workshop on Continuous Manufacturing of Biologics to be held Dec. 7 and 8 in Rockville, MD.

John F. Kokai-Kun, Ph.D., is director, external scientific collaboration for the US Pharmacopoeia. He received his Ph.D. in microbiology from the University of Pittsburgh, School of Medicine, and has more than 20 years of experience in drug development. He has held various positions with several biotechs and pharma companies, where his R&D efforts have focused primarily on biologics and vaccines. Kokai-Kun was also an adjunct assistant professor of microbiology and immunology at the Uniformed Services University of the Health Sciences and is retired from the United States Army.