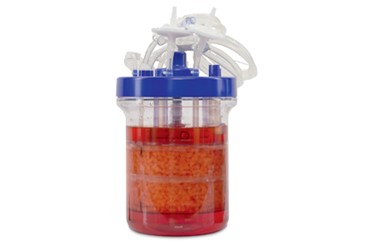 A well-established method to produce LVs is the transient transfection of adherent human embryonic kidney (HEK) 293T cells. LVs are gaining more and more attention as candidates for gene and cell therapies, resulting in an increasing demand. Multi-layer cell factories have often been used, but are limited by their poor scalability, high cost, labor intensiveness, and high batch-to-batch variability of production. Using bioreactors, most of the problems of the classical two-dimensional culture methods can be solved. Stirred-tank bioreactors allow us to optimize cell growth and achieve higher cell densities. To further increase the cell density, and, at the same time, protect cells from shear forces, they can be grown on Fibra-Cel disks [1]. Fibra-Cel disks are made of polypropylene and polyester non-woven fiber to which the cells adhere. Fibra-Cel has already been successfully used for the production of retroviral vectors in rocking bag bioreactors, and also in a packed-bed bioreactors [2, 3]. The packed-bed basket technology, developed by Eppendorf, provides a low-shear environment for the cultivation of animal cells to very high cell densities [4]. An Eppendorf BioBLU 5p single-use packed-bed bioreactor packed with 150 g of Fibra-Cel disks provides a growth surface area of 180,000 cm2, which is the equivalent of 29 10-layer, stacked-plate, cell-culture vessels [5]. Instead of increasing the size of a bioreactor, scale-out strategies using multiple small bioreactors may be used to increase the production yield. Such systems have the advantage that the whole production lot is not lost if a single bioreactor is contaminated. Additionally, scaling-out (or scaling-in) offers greater flexibility when larger (or lesser) amounts of the product are needed.