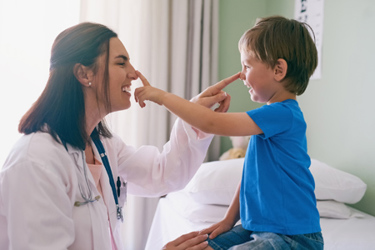 Oral formulations of drugs account for up to 75% of prescriptions from healthcare providers, and on the surface it’s easy to see why: they are relatively inexpensive and easy to manufacture, may be developed with controlled-release properties, are non-invasive, offer good stability, and are relatively easy to administer and convenient for the patient.1,2

There’s also the gut to consider. Certain disorders, including ones of the central nervous system (CNS) such as migraine and Parkinson’s disease, are associated with high rates of nausea and vomiting, and often under-appreciated gastrointestinal (GI) comorbidities, that can further impair oral absorption.1,2,6,7,8,9 Indeed, disorders of gut-brain interaction (or DGBI) are now considered to be often overlooked and poorly understood.

There is a clear need for non-injected, non-oral dosage formulations as alternatives for treating many acute conditions.

Why The Upper Nasal Space?

Drugs delivered nasally have the potential to provide a more rapid onset of activity, avoid degradation in the GI tract and first-pass hepatic metabolism, are associated with lower risk of GI-related adverse effects, can be administered independent of meals (potentially by a caregiver), and provide patient confidence and ease of use.14

“Nasal drug delivery” is a broad term for such a complex feature of the human body, though, and the site of drug deposition within the nose is an under-appreciated consideration that carries far-ranging implications.

There are numerous approved nasal drug products on the market, of which nearly all use nasal atomizers to deliver drug into the lower nasal space located near the front of the nasal cavity, just behind the nostrils.15,16,17,18,19,20 The lower nasal space includes structures such as the vestibule and the nasal turbinates. The vestibule is covered with relatively impermeable squamous epithelium that is poorly suited for drug absorption, and although the inferior and middle turbinates are covered with more permeable epithelium, they are also covered with highly motile cilia and variable amounts of mucus. 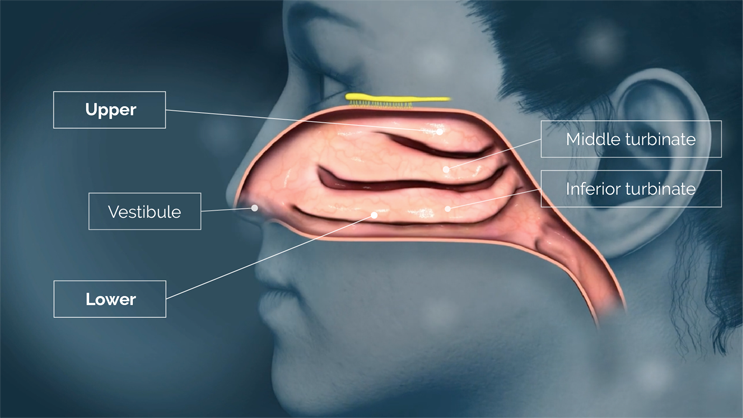 Delivering drug to the lower nasal space requires rapid absorption before gravity leads to drug dripping out of the nostril or back into the throat.15,16,17,21 Drug delivered to the lower nasal space can also get trapped in the mucus and cleared/swallowed by mucociliary clearance — an efficient protective mechanism that, unfortunately for drug developers, acts as a barrier to therapeutic delivery in the nose.22 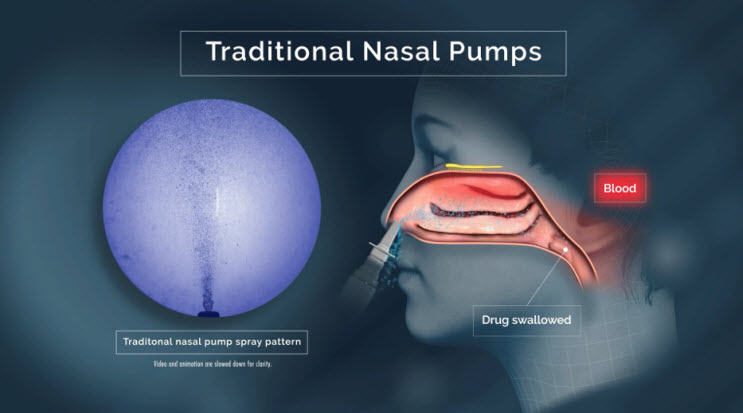 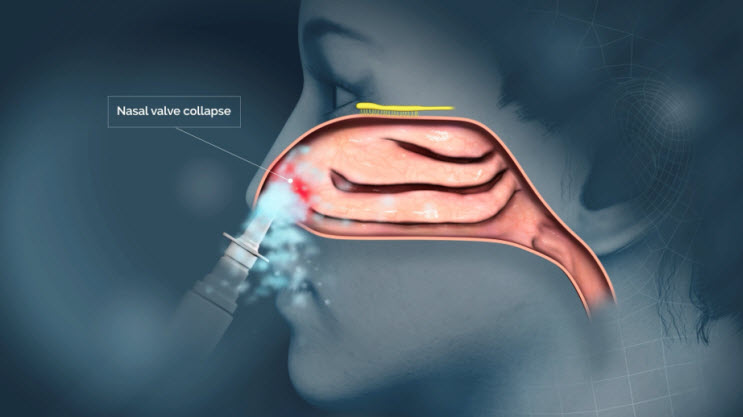 The upper nasal space, however, is an underutilized route of administration that inspired my early research and led to the development of Precision Olfactory Delivery, or POD, technology.

Within the upper nasal space is the olfactory epithelium, which has immobile cilia and therefore much slower mucociliary clearance and rich vascularization that make it more permeable than the lower space and more capable of rapid drug absorption into systemic circulation.20

Traditional sprays that deploy a “cloud” of droplets (or dry particles) only deliver around 5% of active drug to the upper nasal space, with only slight improvements after active, forced sniffing during administration.25

How Does POD Technology Work?

The POD technology is a family of handheld, manually actuated, propellant-powered administration devices that deliver drug specifically to the upper nasal space. 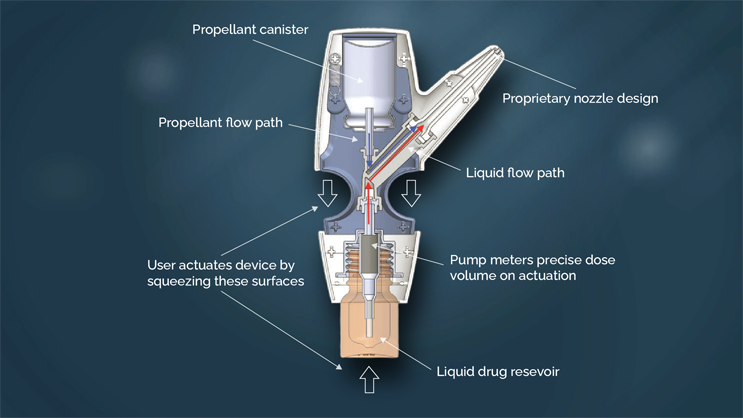 The proprietary nozzle design allows for a narrow-targeted plume of drug to effectively pass through the nasal valve to reach the upper nasal space.

The two-step action of the propellant launches the drug, and then pushes it to the farthest reaches of the upper nasal space. By maintaining the propellant and the drug (liquid or powder) separate until the time of the delivery, the POD overcomes the manufacturing challenges of maintaining dose uniformity and drug stability when drug is formulated in propellant. This allows the POD technology to deliver both liquid and dry powder formulations.

In the case of Impel’s FDA-approved product Trudhesa (dihydroergotamine [DHE]), it delivers a plasma level similar to that found 30 minutes after IV administration, and our investigational product, INP105, achieves similar maximum level and exposure to the same active drug given intramuscularly but reaches the maximum level faster. Importantly, these consistent drug levels may result in a more reliable clinical response.27,28,29

Oral medications account for over 90% of therapies utilized to treat migraine. However, due to the several reasons mentioned above for needing an alternative to oral medications, the current American Headache Society guidelines recommend consideration of reliable, well-tolerated, non-oral routes of administration for acute therapies.3,8,15 Trudhesa was approved in September 2021 by the FDA as the first drug-device combination product to use the POD technology and the first product to successfully deliver drug to the upper nasal space and achieve therapeutic benefit for people with migraines. It avoids the undesirable high-peak plasma DHE concentration seen with IV administration while it generated similar plasma levels from 30 minutes to 48 hours.28 It also achieved a four-fold increase in maximum DHE concentration and a three-fold increase in the total amount of DHE in the blood, compared with liquid DHE nasal spray using an identical formulation but less than three-quarters of the dose.28 Patients reported that Trudhesa was easy to use in 84% of cases, and the patient survey indicated that Trudhesa allowed patients to return to normal activity faster, consistently treated their migraines, worked faster than previous treatments, and stopped migraines from coming back.28

Together, these benefits may overcome the limitations of traditional nasal delivery systems for the acute treatment of migraine and other conditions. The greater delivery consistently seen with the POD technology is paramount as it could result in a more reliable clinical response.

John Hoekman, Ph.D., is the cofounder and chief technology and development officer of Impel Pharmaceuticals. He has spent the last 14 years investigating nasal drug delivery of therapeutics targeting the central nervous system. He cofounded Impel NeuroPharma (now Impel Pharmaceuticals) while attending graduate school at the University of Washington. He is the lead inventor of the POD technology. Hoekman has spent the last 10 years working to grow Impel from a preclinical device-focused company to a commercial-stage pharmaceutical company. He holds a BS in physics from the University of Minnesota and a Ph.D. in pharmaceutics from the University of Washington.