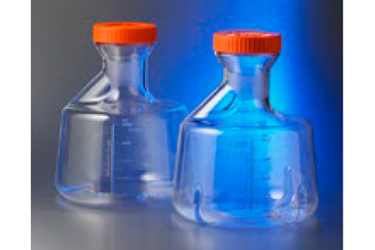 As the bioprocess industry grows, there is a corresponding growth in demand for single-use containers that can efficiently culture large quantities of cells. To aid in this effort, Corning has developed a 5L Erlenmeyer flask with the same footprint as a traditional 3L Erlenmeyer flask. The 5L shape has been optimized for increased gas exchange compared to the more traditional Erlenmeyer flask designs. Due to gas exchange limitations, most traditionally shaped Erlenmeyer flasks can only accommodate approximately one third of the stated volume of the vessel. Corning’s new vessel design allows for the culture volume to be increased to greater than one half of the stated volume of the vessel without compromising cell viability or density. The increased volume ratio results in a greater number of cells (higher cell yield) cultured in less space. In this study, we demonstrate that the Corning 5L Erlenmeyer flask exhibits enhanced performance compared to a competitor’s 5L Erlenmeyer flask when culturing a suspension cell line commonly used for baculovirus production.