Single-Use Standardization: Is It Holding Back The Biopharma Industry? 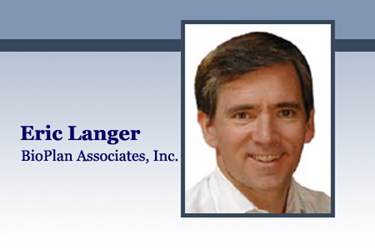 Almost three-quarters of the biomanufacturing industry consider standardization of disposable bioprocessing devices to be critical to their facility.  But just 40 percent are satisfied with their current vendor’s efforts toward standardizing their devices’ connectivity, materials, dimensions, or a variety of other design elements.

The data from BioPlan Associates’ 12th Annual Report and Survey of Biopharmaceutical Manufacturing Capacity and Production [1], speaks to the industry’s ongoing desires for standardization in single-use devices. As usage of these disposable devices increases, the gap between the importance of standardization and end-users’ satisfaction with their supplier’s standardization efforts has steadily been worsening. This year, standardization dissatisfaction levels have become significantly larger when compared with even basic single-use attributes, such as the quality and strength of these products.

Standardization of single-use devices is an important part of broader implementation and integration of these devices into biomanufacturing facilities. Tellingly, when we asked the more than 200 qualified biopharmaceutical manufacturers we surveyed this year to cite the single most important biomanufacturing trend on which the industry must focus its efforts this year, respondents were far more likely to point to single-use implementation and integration (9 percent of respondents) than they were to better single-use devices (4 percent). In other words, as disposable devices reach mainstream adoption, the focus becomes an issue of implementation as opposed to innovation.

There has been a shift in the most critical standardization factors. This year, 57 percent of respondents identified connector compatibility (interchangeability) as a “very important” attribute they felt single-use vendors need to work harder to standardize. That figure is up from 51 percent last year and 48 percent the year before, indicating a growing desire for standardized connectors that would allow for a “plug and play” approach.

In fact, connector compatibility is now seen as a top “very important” standardization factor compared with materials and characteristic testing, which occupied the top two spots, respectively, last year. This represents the industry’s need to integrate each of their vendors’ technology into their own system and facility layout.  Having to deal with adaptors, or adding complex tubing sets creates risk for operator errors, leaks, damage, and product loss.

The standardization attributes we tested were deemed at least “important” by a majority of respondents: 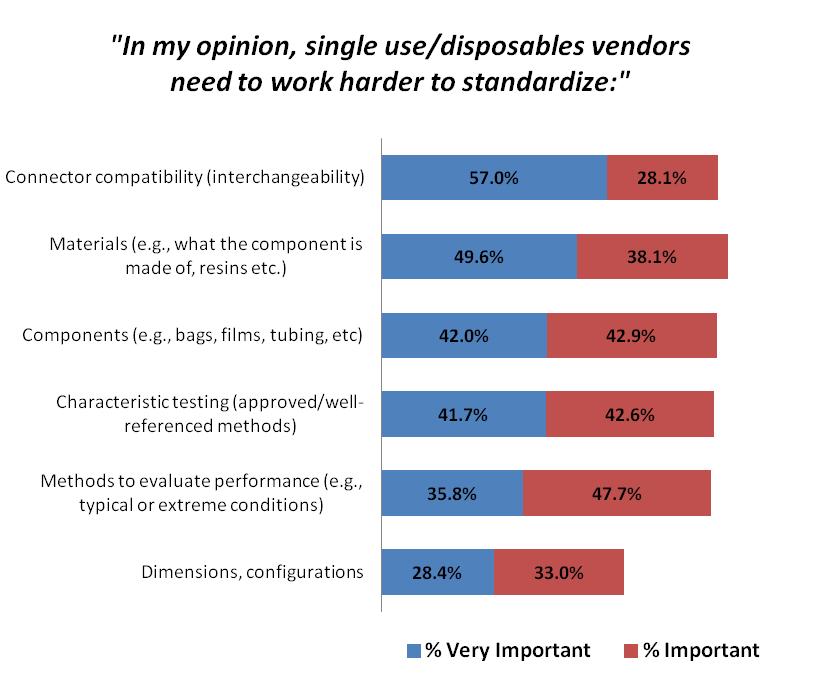 Standardization is an easier goal in principle than in action, and there are considerable hurdles to cross. For example, vendors would need to change their products, which means surrendering advantages in terms of the markets and technologies they have developed. Additionally, larger vendors would be in a better position to try to drive the direction of standardization, due to their market presence, which may unduly influence the standards.

Who Should Set Standards?

There remains a wait-and-see attitude among suppliers and end-users regarding who should be setting these standards. While guidances have recently been released by organizations such as the Bioprocessing Systems Alliance (BPSA) regarding particulates, extractables, and leachables, etc., these are not regulatory. Definitions are still being settled on, and it is likely that resulting standards will be still some time off.

In prior years running our annual survey, when we asked end users and suppliers to the industry to identify the organizations they felt should set the various standards associated with single use equipment, there was a broad variety of responses, and a lack of awareness regarding the standards-setting process, responsibilities of regulatory bodies, and other stake-holders in setting standards.

Suppliers and designers are expecting the standards to come from a variety of organizations, including:

So it appears that the push to standardization is now coming primarily from end-user groups such as Biophorum Operations Group (BPOG), with collaboration from supplier and end-user associations like the BPSA. These industry groups are convening and working on these issues, and progress is reportedly being made, albeit slowly.

Our data also shows that end-users recognize that standardization will expand usage of these devices in bioprocessing. Standardization of materials and definitions will simplify the overall regulatory process for manufacturing, and will provide other benefits, including the ability to source raw materials more consistently. Easier plug-and-play operations will reduce failures and operator errors, and will permit end-users the ability to consider alternative suppliers and not get locked into a single- source situation.

Currently, a majority of the industry finds single-source dependence to be a hindrance to increasing their use of disposables, and some find it their single most critical reason for avoiding these devices. Given that, we can expect standardization will result in wider market penetration for single-use devices. And that’s something vendors can get behind.

Survey Methodology: The 2015 Twelfth Annual Report and Survey of Biopharmaceutical Manufacturing Capacity and Production yields a composite view and trend analysis from 237 responsible individuals at biopharmaceutical manufacturers and contract manufacturing organizations (CMOs) in 28 countries. The methodology also included 164 direct suppliers of materials, services and equipment to this industry. This year's study covers such issues as: new product needs, facility budget changes, current capacity, future capacity constraints, expansions, use of disposables, trends and budgets in disposables, trends in downstream purification, quality management and control, hiring issues, and employment. The quantitative trend analysis provides details and comparisons of production by biotherapeutic developers and CMOs. It also evaluates trends over time, and assesses differences in the world's major markets in the U.S. and Europe