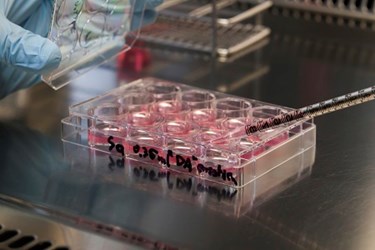 A team of researchers at the Washington University School of Medicine in St. Louis reported that they have discovered a way to directly convert human skin cells into a type of brain cell that has been damaged by Huntington’s disease.

The team chose to produce a certain type of brain cell known as medium spiny neurons, which play a key part in controlling movement. Medium spiny neurons are the cells most affected by Huntington’s disease, a neurodegenerative disorder characterized by involuntary muscle movements and cognitive decline. The disease symptoms typically begin showing in mid-adulthood, and they steadily worsen over time.

For their experiment, the scientists used adult human skin cells instead of the typical mouse cells or embryonic human cells. The team placed the skin cells in an environment similar to the environment of brain cells and then exposed them to two small molecules of RNA named miR-9 and miR-124. In their past research, the scientists have discovered that these microRNAs turn skin cells into a mix of various neuron types. Dr. Yoo and his colleagues fine-tuned the chemical signals by further exposing the cells to transcription factors they knew are found in the part of the brain where medium spiny neurons thrive. Results show that the converted cells survived for at least six months after they were injected into mice’s brains. The cells also behaved in a similar fashion to native brain cells.

“Not only did these transplanted cells survive in the mouse brain, they showed functional properties similar to those of native cells. These cells are known to extend projections into certain brain regions. And we found the human transplanted cells also connected to these distant targets in the mouse brain. That's a landmark point about this paper,” said Dr. Andrew S. Yoo, assistant professor of developmental biology in Washington University School of Medicine and senior author of the study.

The new process differs from other techniques in that it does not need to undergo a stem cell phase, thereby avoiding production of multiple cell types. The scientists added that using adult human cells offers the opportunity to use the patient’s own cells in future procedures, which would radically minimize the risk of rejection by the patient’s immune system. Dr. Yoo’s team is now preparing to test skin cells taken from patients with Huntington’s disease using the approach. They also intend to inject healthy reprogrammed human cells into mice models of Huntington’s disease to check whether these have any effect on the disease’s symptoms.

The researchers’ work was published in the previous month’s issue of the journal Neuron.