By Adam Lohr, RSM US LLP 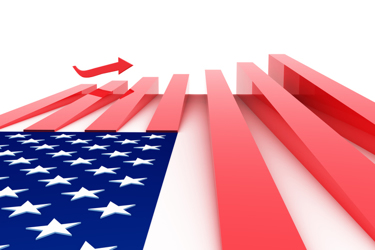 Halo effect, honeymoon phase, Goldilocks moment, whatever you want to call it, life sciences — particularly biotech — is experiencing it.

Through all of the devastation and uncertainty caused by the COVID-19 pandemic, biopharma companies have been able to respond in an astounding manner through vaccines, therapies, diagnostics, and variant tracking. For those efforts, the industry is receiving some amazing intangible benefits in terms of investor awareness, political support, and increased public perception. According to the January 2021 Harris Poll, 62% of survey respondents have a positive opinion of the pharmaceutical industry, which is up from 32% in January 2020.

Within the life sciences ecosystem, the development of biotechnologies and the shift in drug pipelines from small to large molecule have been picking up speed for a decade. The pandemic has also served as a catalyst to propel the sector and its capabilities into the mainstream of investor interest and public understanding. While future expansion of the biotech sector is promising, it will not be without challenges. But first, more on that promise.

For industry professionals, there is little surprise in the shift from small molecule blockbuster drugs with broad applicability to biologics and cell and gene therapies with an eye toward personalized medicine. Once the investor population gained a better understanding of what biotechnology is capable of achieving, it opened up the floodgates of private and public capital, which in turn financed further breakthroughs in technology. As seen below, biotech companies have outperformed the broader market and their pharma peers for almost a decade. 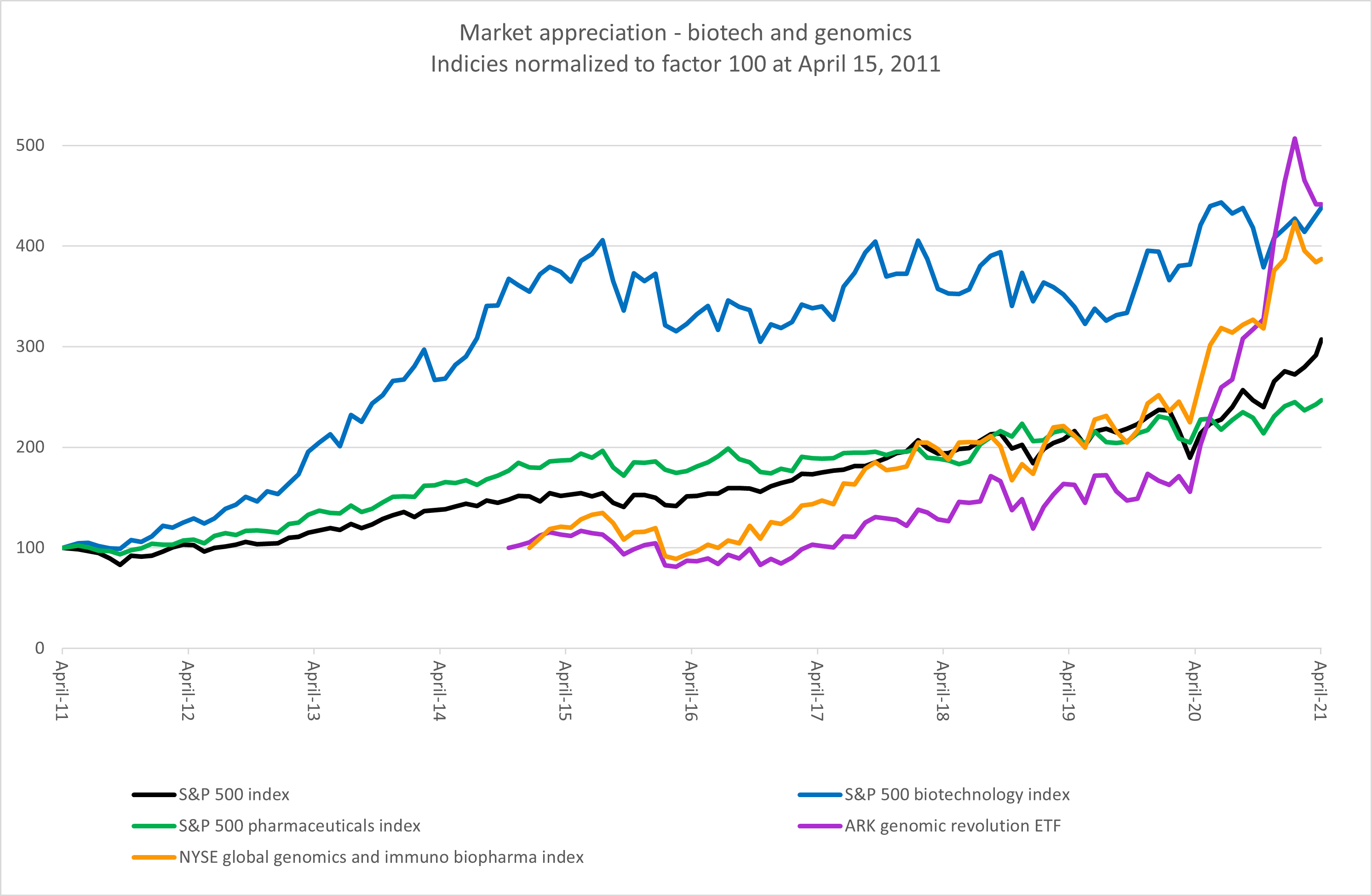 With the emergence of the pandemic and a new awareness of what biotechnology can achieve through genetics and cell and gene therapy, those subsectors have also experienced an investment boom. Similar to what happened to broader biotech early last decade, cell and gene will likely enter into an innovation feedback loop whereby advances in the technology increase investor and consumer awareness, drawing in capital and demand, which then leads to further innovation and breakthroughs. In an analysis of worldwide biotechnology products by phase, there is a clear shift in the distribution of effort across the sector. Recombinant products and traditional biologic vaccines are giving way to monoclonal antibody research and the development of new cell and gene therapies.

For life sciences companies, the successful development of a new product or more effective therapy is a known and constant challenge, but one that can be addressed through advancements in technology and scientific breakthroughs. The more difficult issue to understand and manage is the regulatory and political environment in which our life sciences companies operate.

If political contributions are indicative of industry preferences, it’s worth noting that candidate Joe Biden received 3.3 times the contributions from life sciences interests than then-President Donald Trump, according to the Center for Responsive Politics. Further, Democratic candidates in congressional races received 1.9 times the life sciences contributions than their Republican peers. Our research suggests that these contributions are focused more on long-term industry issues, geopolitical and supply chain stabilization, and extended access to healthcare than on curbing pricing reforms.

With a closely divided legislature and much more pressing matters such as the pandemic, an expected economic boom, and a major infrastructure proposal under the American Jobs Plan, it is expected that drug pricing legislation will be put on the back burner for the near to mid-term. However, that does not mean that life sciences companies will not be faced with a new set of global and domestic challenges.

Biotech may be heavily impacted by the efforts of a new international working group created by the U.S. Federal Trade Commission, which is focused on the evaluation of pharmaceutical mergers and their impact on competition, innovation, and pricing. In a statement, acting FTC Chair Rebecca Slaughter said, “Given the high volume of pharmaceutical mergers in recent years, amid skyrocketing drug prices and ongoing concerns about anticompetitive conduct in the industry, it’s imperative that we rethink our approach toward pharmaceutical merger review.” In looking at the historical trends of corporate M&A by life sciences acquirers, the heyday of mergers has come and gone, but the focus is increasing on high-value biotech acquisitions.

Over the last 20 years there have been 36 life sciences mergers that cost more than $10 billion, and they have collectively transferred more than $1 trillion in consideration, according to our analysis of Bloomberg data. The majority of these deals were combinations or divestitures by and among global pharma or medical device companies. Setting aside those transactions, more than 90% of life sciences M&A is for deals of less than $500 million, and they usually consist of pharmaceutical companies making acquisitions of pre-commercial middle market companies. Over the last decade there has been a consistent shift toward the acquisition of biotech targets as companies look to diversify portfolios and move into new and innovative technologies. This can be thought of in terms of innovation through acquisition, and it has been an important, albeit decreasingly so, exit strategy for founders. 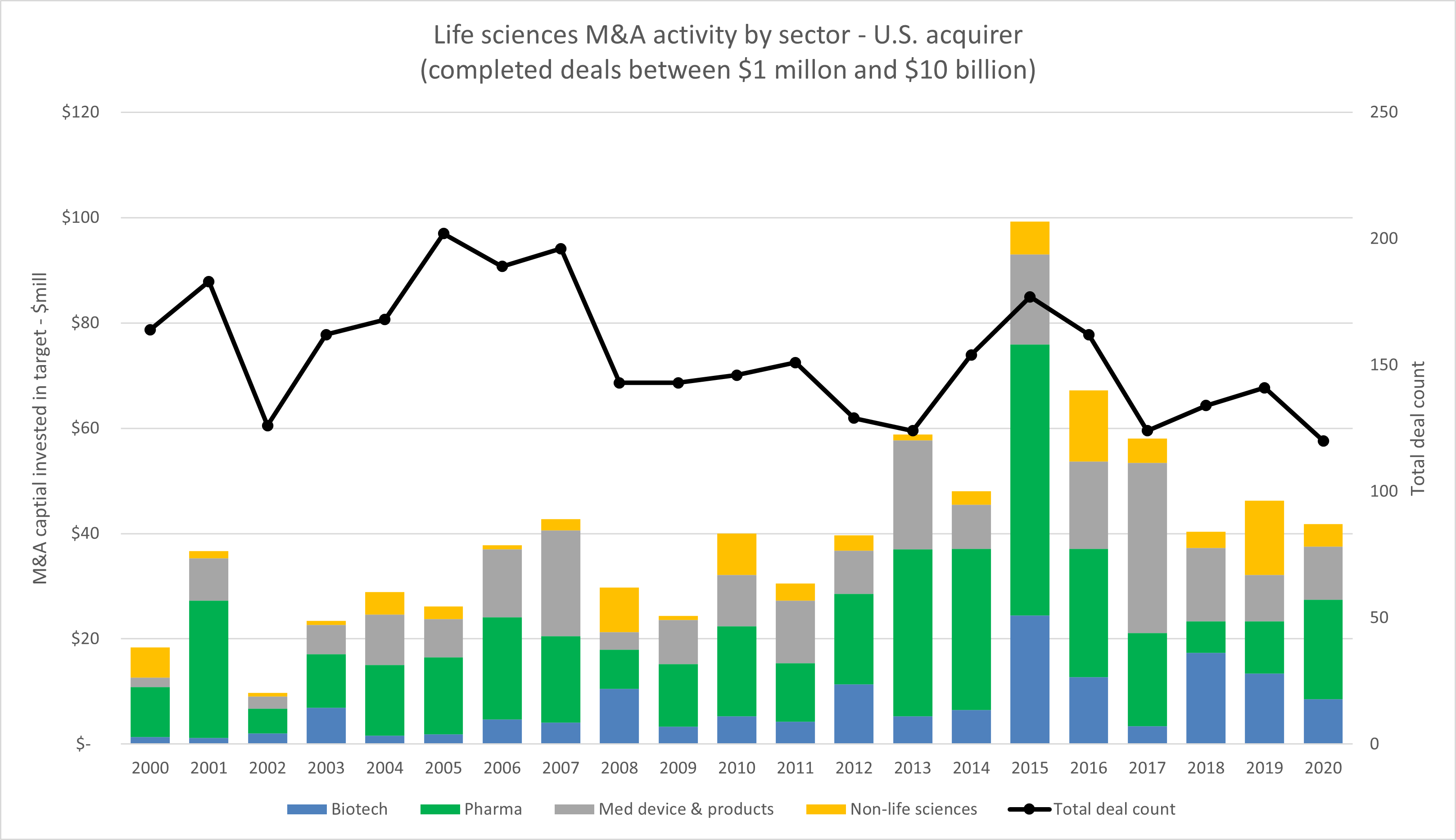 The shift toward biotechnologies is one we believe is permanent in the ecosystem, as we are now at an inflection point where there is both supply and demand. Demand comes in the form of public desire for value-based care and personalized medicine, and supply has been made possible through increased access to advanced technology and the expansion of skilled research and manufacturing organizations that have democratized innovation.

Hope For Continued Collaboration With Regulators

The success of the vaccine, therapeutic, and diagnostic development to address the pandemic was due in no small part to the willingness of government agencies to finance and collaborate with life sciences companies and research institutions. These were extraordinary times, but the public has seen what is possible when working together.

While a changing of the guard at the Food and Drug Administration, Centers for Disease Control and Prevention, U.S. Department of Health and Human Services, and other core agencies is to be expected, it’s anticipated that the Biden administration will want to continue the long-term trend of more rapid FDA approvals. If nothing else, the pressure to control drug pricing and expand access to drugs and medical devices should encourage regulators to keep approval pipelines moving for both branded and generic drugs. 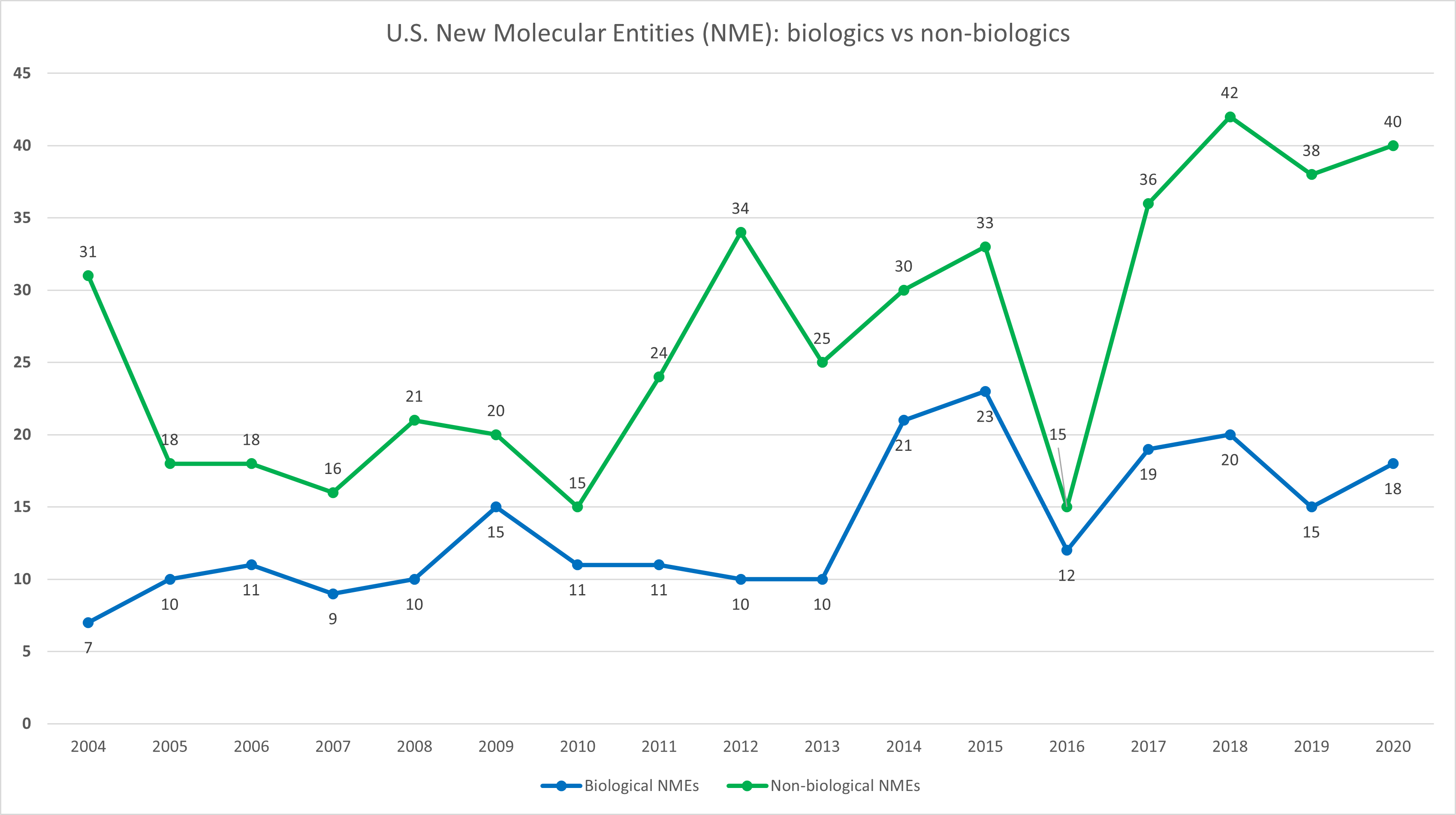 Potential Impacts Of The Infrastructure Proposal

Historical perspective frames the proposed infrastructure bill in terms of critical repairs and rehabilitation of our roads, bridges, ports and water systems, and public transportation. In a recent article by RSM Chief Economist Joe Brusuelas, he refers to these efforts in terms of big “I“ infrastructure, which will be core components in any iteration of a spending bill. What is less talked about are the little “i” infrastructure projects that will be critically important to biotech companies, as well as any STEM, or science, technology, engineering, and mathematics sectors, and the development of the new digital economy.

At first glance, proposed projects such as expanded broadband and public health infrastructure and support for the growth of domestic research and development in manufacturing may not appear to have a direct correlation to biotech, bioprocessing, or cell and gene therapies. The reality is that these infrastructure efforts will support the overall life sciences ecosystem and propel continued advancements in biotechnology and its supporting sectors. Some of the proposed spending with a high potential impact on biotech includes:

The support of our domestic safety and prosperity does come at a cost. Brusuelas has outlined potential options for how to pay for the spending, including his novel suggestion for the establishment of a national infrastructure bank. However, the most likely result will be a mix of new taxes on corporations and individuals and limiting the benefits of effective tax structuring under current rules.

In line with a broader push by both parties to encourage domestic companies to keep operations (and profits) in the U.S., there are specific provisions of Biden’s tax plan that expand on Trump era measures to increase the minimum tax on foreign profits. Additionally, part of President Biden’s tax plan would also curb deductions for R&D costs and employee stock compensation. These are all tools that have been used extensively by tech and life sciences companies since their intangible assets are just as easily developed and maintained overseas as they are domestically. Big tech has been relatively quiet in terms of what these changes could mean for their sector, but Merck has stated that “these proposed tax increases would undermine the biopharmaceutical sector’s ability to do its more important work when the world needs it most,” according to Bloomberg.

Biotech companies are pushing the boundary of what used to be considered science fiction, while simultaneously managing high failure rates, long development cycles, and prohibitively expensive development costs. Success of the sector is dependent upon a flow of talent, support from regulators, continued demand from the patients and consumers, and access to capital markets.

For all of the risk involved with this space, there are also significant rewards. This growth potential has been driving record levels of private investment into startups and middle market companies, as well as public investment in new life sciences IPOs. 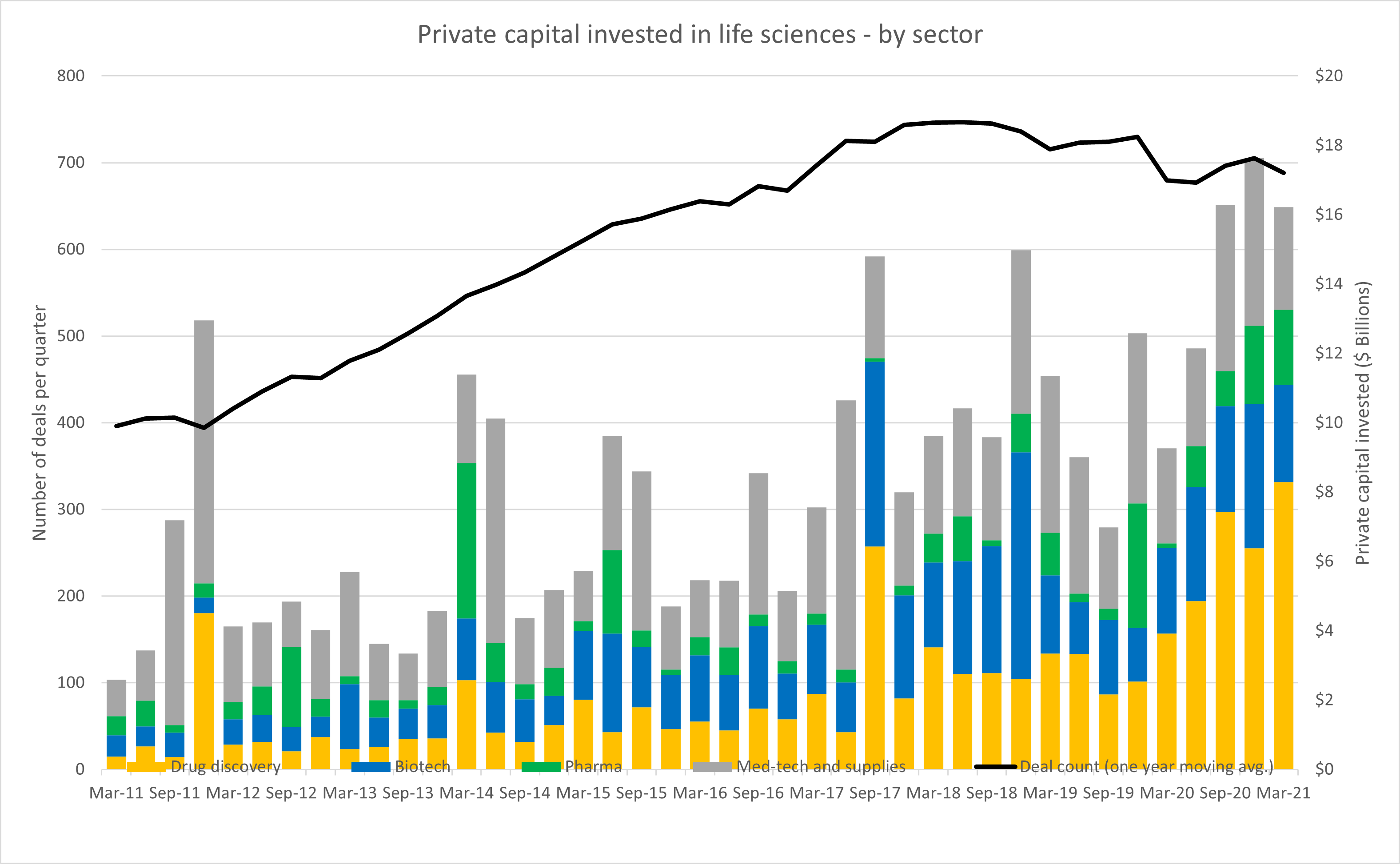 When it comes to accessing public capital, there truly is no more effective industry than life sciences and biotech in particular. Over the last three years, 40% of non-special purpose acquisition company (SPAC) initial public offerings have been life sciences companies, and of those life sciences IPOs, 70% were of biotech companies. As we have discussed, this boom in biotech IPOs is being driven by the shift in therapeutic focus away from small molecule products and longer-term market expectations for the personalization of medicine.

All of these capital infusions are starting to bring biotechnology products through commercialization, and consensus forecasts from Evaluate Pharma suggest that worldwide biotechnology sales will grow at a CAGR of 12% through 2026. A major portion of that growth is expected to be from cell, gene, and monoclonal antibody products. 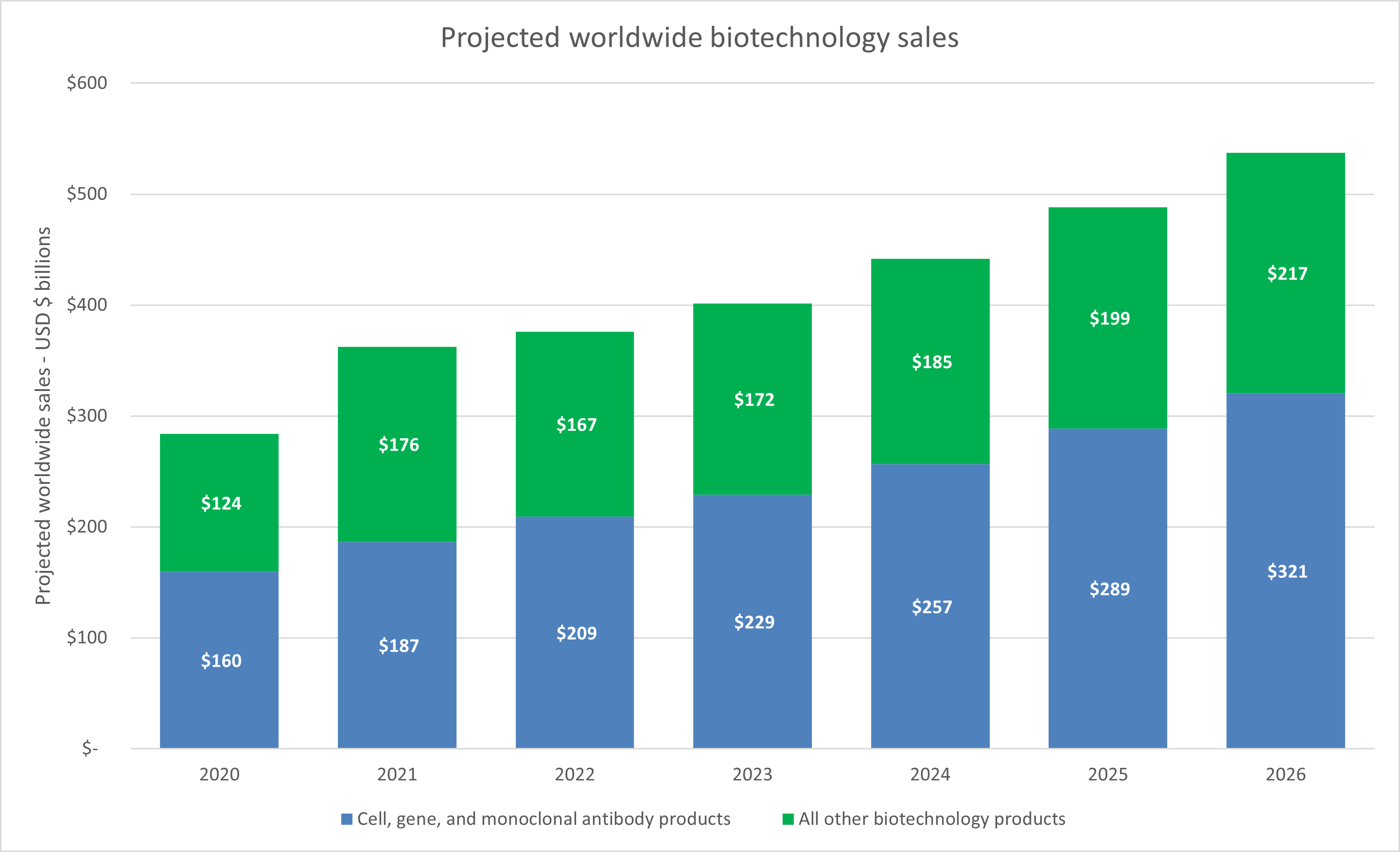 Source: Evaluate Pharma, RSM US. Click on image to enlarge.

Life sciences and biotech companies will likely need to realign operations and strategies following the pandemic. While there will be challenges in terms of talent acquisition, competition, and regulation, there is a significant tailwind of support from public perception and investor confidence that will drive innovation and growth.

Adam Lohr is a partner at RSM US LLP and a life sciences senior analyst in RSM’s Industry Eminence Program. As part of the program, he understands, forecasts, and communicates economic, business, and technology trends shaping the industries RSM serves. He has 13 years of accounting and finance experience, serving high-growth, private equity, and venture-backed companies in the middle market. Lohr specializes in providing financial audit services and helping clients respond to technical, regulatory, and economic changes that impact their businesses.