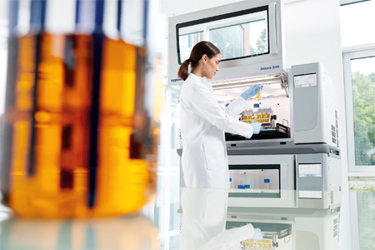 The preparation of an optimal inoculum is crucial for the success of any bioprocess with regard to lag-times, growth kinetics, productivity and prevention of contaminations. Throughout the multiple inoculation steps of modern fermentation processes, from stock culture via shake flasks and multiple seed fermenters to the final production fermenters, the highest quality and integrity of each respective inoculum must be maintained with regard to the criteria listed in Table 1.

Fermentative ethanol production using the yeast Saccharomyces cerevisiae is a typical example for a bioprocess with high susceptibility to inoculum quality. Ethanol is one of the largest volume biotechnological products with a global production above 100 million tons. As for any other bulk chemical, ethanol production is cost-sensitive, so that suboptimal inocula considerably lower the profitability of the overall bioprocess due to lower fermentation yields. Several growth characteristics complicate the preparation of optimal S. cerevisiae inocula, first and foremost its diauxic growth behavior on glucose with an initial respiro-fermentative growth phase of desired ethanol production, followed by a respiratory growth phase of undesired ethanol consumption. This diauxie comes along with growth phase dependent differences in the cell composition, storage carbohydrate utilization and morphology  The underlying metabolic fluxes and their regulation persist over generations and shape the lag-phase. Inoculum preparation is furthermore complicated by the fact, that S. cerevisiae’s growth rate and productivity considerably depends on the inoculation cell density.

Using S. cerevisiae as an example, we present an integrated approach for optimal inoculum preparation in shake flasks with automated seed inoculation, conditioning and online monitoring, which leverages the early stages of culture expansion to a level of bioprocess monitoring and control that has until today only been accessible in later stage stirred tank bioreactors.