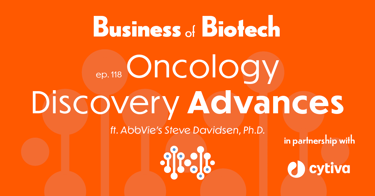 AbbVie VP of Oncology Discovery Research Discovery Steve Davidsen, Ph.D. is a living, breathing timeline of the company's cancer research and development efforts. He got his start with the company— Abbott at the time— way back in 1986. As such, he's charted the adoption of multiple advanced technologies that have contributed to the realization of dozens of molecular weapons in the fight against cancer. On this episode of the Business of Biotech, Dr. Davidsen shares the latest on AbbVie's adoption of computational biology and how it's contributing to discovery and development efficiencies, why he's an AbbVie "lifer," how he manages and motivates a large team of research scientists, and a whole lot more.