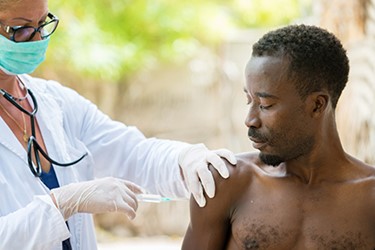 Schistosomiasis is a chronic parasitic infection that ranks second only to malaria on the list of the world’s most devastating infectious diseases, in terms of its public health and socioeconomic impact, according to the World Health Organization (WHO; Geneva, Switzerland). At any time, this neglected tropical disease affects an estimated 200 million people in the world’s most poverty-stricken regions, with 280,000 people dying each year from Schistosomiasis-related health issues.

Among its major effects, Schistosomiasis causes chronic developmental disabilities, cognitive delays in children, severe end organ damage to the intestines, liver, and urinary tract in adolescents adults, as well as bladder cancer. In girls and women, genital Schistosomiasis may represent the most common gynecologic condition on the African continent, where it is also a leading co-factor in its HIV/AIDS epidemic. Schistosomiasis is most prevalent across sub-Saharan Africa and the Middle East, Brazil and Venezuela in Latin America, and Philippines and China in East Asia.

Schistosomiasis transmission has been reported in 78 countries. People living in areas of extreme poverty are exposed to, and infected by, the parasitic flatworms in their infective stages during routine agricultural, domestic, occupational and recreational activities involving freshwater lakes and rivers, making it impossible to break the cycle of ongoing transmission and reinfection, even for those who have been treated for the infection. It’s notable that Schistosomiasis was recently noted to have emerged in Corsica, France, possibly as a consequence of human migrations from Africa or climate change. There are concerns that through climate change, additional sites for schistosomiasis emergence are possible.

Working in close partnership, Texas Children’s Hospital Center for Vaccine Development at Baylor College of Medicine, and MilliporeSigma, the life science business of Merck KGaA, Darmstadt, Germany, are combining their bioprocess and engineering expertise to advance and optimize the manufacturing process for a promising new preventive recombinant proteinbased vaccine, to end the scourge of Schistosomiasis, one of the world’s most devastating and pervasive parasitic infections and neglected tropical diseases.