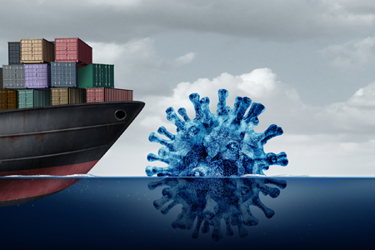 The COVID-19 pandemic has caused severe disruption to supply chains, making it difficult to get material. Supply chain disruptions have occurred many times in my experience, i.e., the manufacturing process is ready to run, and something happens; it could be material isn’t coming on time or material we thought we’d ordered correctly turns out not to be the right material for whatever reason. As a manufacturing team, you either have what you need on the shop floor or you don’t, and while a root cause analysis is helpful, it really doesn’t matter in that moment — we can’t run today is the short story.

In biopharma there are many constraints, but two possible approaches are: transfer inventory from inside your company or use alternative materials. Both of these routes can throw up regulatory and change controls hurdles, and they won’t necessarily solve the problem or get the manufacturing process back up and running any quicker.

A specific situation that occurred recently at Merck was that we were unable to get the filter assembly we needed, and our supplier was struggling to meet demand, possibly due to COVID-related orders. We had the same parts in multiple sites but were unable to transfer them between sites because of different inventory systems, different part numbers, and, in some cases, quality systems were slightly different so moving inventory from site to site was problematic. Using an alternative was not always welcomed, either. Below are our two lessons learned.

A proactive mindset was key for us, and it’s key for you, too. You need to imagine that these situations are going to happen and plan for them. Fortunately, at Merck we started this 10 years ago, although no one expected the 45- to 55-week lead times we saw last year with COVID. We did plan for a 20-week lead time, as well as for the eventuality that procurement colleagues would request a technical alternative to switch suppliers in order to gain leverage or a better price, etc.

Establishing what the PDA technical report No. 66 calls functional equivalency was a very important part of the process work, and it’s something that manufacturing and supply chain personnel should be demanding. Rather than focusing on how quickly a second source can be qualified in response to a crisis, the approach should be prior qualification of a second source, or even alternatives from the same source. For example, we received a request for a 100-L storage bag, but the only item available was a 200-L bag from the same company with the same connectors and the same tubing, but it couldn’t be used. A 200-L bag will clearly hold 100 L, but it would take around six weeks to approve a batch record change.

In these situations, you can avoid supply disruptions if you work out the details ahead of time. For example, take the idea of functional equivalency, which is clearly established in the PDA report and can be simply described as “doing the same thing with two items that don’t appear to be the same.” In the single-use space, this is easier than it is for raw materials, as you’re dealing with well characterized single-use plastics. Depending on where you are in your process, you may be able to establish a universe of equivalencies.

For the filter assembly, the model we came up with was unconventional, but it worked. We had a set of qualified components put together in a certain way from a certain supplier that worked in our process, and we investigated a scenario where we took the exact same components at the subcomponent level and had them assembled by a different supplier. This results in fewer changes, but it is still subject to change control.

The ideal solution would be to establish standard express lane change control paradigms; otherwise, any adjustments would be slow, even if they were technically sound. These express lane change control paradigms consist of you pre-approving changes that you anticipate needing. A simple example would be a rule like, “any tubing segment can be made shorter.” A more complicated example would be, “components listed in internal equivalency reports may be substituted for each other on qualified assemblies.” In both cases, an expedited form of change control would be used:

Essentially, I’m suggesting moving the work forward so that it is already complete in case it is needed in the future.

Our supplier graciously allowed us to take their drawings and their list of parts to an alternate supplier, as they couldn’t help us in the time frame we needed. This was not just one quick project; it was on the order of 70 to 80 assemblies and took many months. So, we had the same parts, a new assembler, and the same irradiation conditions, which happened to be gamma radiation. Change controls were needed in our facilities to show the duality of the part number so that the SAP number lined up with two supplier numbers. The aim was if the parts change was simplified, we could tell our regulatory colleagues that there was no regulatory impact, which in turn made the whole model work. Had a regulatory filing been required, the delays caused would have meant we might as well have waited for the original supplier to deliver the material.

If you are well prepared, you’ll be able to mitigate some of the effects of these crises; if you’re not prepared, it’s incredibly painful. At Merck, we were both prepared and unprepared; in some areas, we had functional equivalencies laid out and in 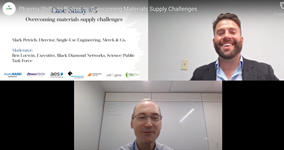 other areas, we didn’t.

This case study was presented at a recent virtual event, Pharma Shifts to Biologics, which included six in-depth case studies and networking sessions. Details of future events can be found here.

You can watch Mark’s case study in full and on demand here.

Mark A. Petrich is vice president of technical operations at Krystal Biotech. Previously, he was director of single use engineering at Merck & Co. He also serves as first vice chair of the Bio-Process Systems Alliance (BPSA). He has worked in biomanufacturing for over 20 years and has navigated many supply chain disruption events. His industry activities have included initiation of the BPSA Sustainability Committee; co-authorship of many BPSA white papers; membership on various BioPhorum Operations Group single-use technology teams; and participation in ASTM standards development. BioProcess International selected Mark for their 2016 Industry Champion award. Prior, Mark was assistant professor of chemical engineering at Northwestern University, where he held the M.E. Fine Junior Professor in Materials and Manufacturing chair.