While much of the research on prebiotic life has been focused on RNA, since it was discovered to have catalytic as well as informational properties, Weizmann Institute scientists have been looking elsewhere for signs of life. Doron Lancet of the Weizmann Institute of Science has developed a model suggesting a lipid-based original life form. This model is described in an article published in the April 11 issue of the Proceedings of the National Academy of Science.

Lipids are readily synthesized under simulated prebiotic conditions, and because of their amphiphilic nature, they tend to form supramolecular structures made of thousands of molecular units. This is exemplified in micells, which can grow and split in a fashion reminiscent of cell replication. Missing from this equation, however, is the ability to propagate information.

Lancet and his students, Daniel Segre and Dafna Ben-Eli, co-authors on the PNAS paper, offer a solution. They surmise that early on, lipid-like compounds existed in a diversity of shapes and forms. They show mathematically that under such conditions, lipid assemblies could contain almost as much information as an RNA strand or a protein chain. Information would be stored in the assembly's composition, i.e. in the exact amount of each compound, rather than in a sequence of molecular units.

This, the authors call a "compositional genome." They further demonstrate how a droplet-like lipid assembly, when growing and splitting, could manifest a form of inheritance, which is crucial to any model of the origin of life. Their computer simulations show how a compositional genome would be handed down with some fidelity to the offspring assemblies. In present-day cells, the replication of information-containing DNA is facilitated by protein enzyme catalysts. In the early prebiological era, catalysis could be performed by the same lipid-like substances that carry the information. Molecules already present inside a droplet would function as a molecular selection committee, enhancing the rate of entry for some, and rejecting others.

Lancet, Segre, and Ben-Eli designed a computerized simulation that shows how, based solely on physiochemical principles, lipid droplets with idiosyncratic compositions accrete, grow, split, self-replicate, accumulate compositional mutations, and get involved in a complex evolutionary game. Importantly, it is entire assemblies, with their complex mixtures of relatively small molecules that are replicated. This differs from the older models, in which a single, long RNA polymer is what gets copied. The scientists' model makes very few chemical assumptions and derives a rich molecular behavior reminiscent of life processes. It therefore has the potential of constituting the long-sought bridge leading from the inanimate world to that of living organisms. 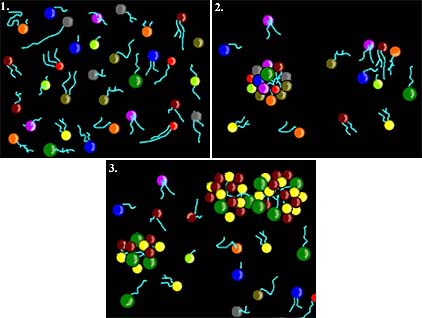 1. Lancet's view of the primordial chemical mixture, with millions of different organic molecules (called NG). Among them, amphiphilic molecules (i.e. molecules having a hydrophilic head group and a hydrophobic tail) would stand out for their capacity of aggregating spontaneously in water. 2. In this primordial mixture, assemblies (e.g. micelles) composed of N amphiphilic molecules would differ significantly from each other, if (as expected) NG >> N. 3. Among the many different micelles formed spontaneously, some could be faster in recruiting their constituents, thanks to mutually catalytic effects. Growing and splitting of such micelles could initiate a process of self-reproduction, in which information is propagated to the offspring in the form of a specific molecular composition. Biopolymers might have been a later "invention" of these protocellular systems.

Still to be addressed is question of how lipid droplets undergo the numerous transitions needed to lead to living cells as we now know them. This study marks a potential first step in what was likely a complex process.