Leachables And Extractables In Single-Use: Trends and Expectations Over Plastics Innovation

Single-use and disposable applications continue to be held back by concerns over leachables and extractables, and according to preliminary results from BioPlan Associates’ 12th Annual Report and Survey of Biopharmaceutical Manufacturers, vendors do not appear to be doing enough to help combat this trend. One of the most widespread concerns of the biopharmaceutical industry is plastics and their additives, by-products, and other non-fully-polymerized polymer and formulated plastics’ leachables affecting bioprocessing and related products.

Indeed, the biopharmaceutical manufacturing community continues to express its concerns with leachables and extractables (L&E), as three-quarters of survey respondents to date agree or strongly agree that this concern is restricting their use of disposables in biopharmaceutical manufacturing. That figure remains steady in relation to the past couple of years of annual studies we have conducted, suggesting that this problem remains persistent and as yet is not being fully addressed. It also remains the most widely cited problem with single-use devices, as it has been for several years now. However, our results this year suggest that it is now rivaled by concerns over breakage of bags and loss of production material, as L&E problems are far more difficult to identify, trace or resolve. 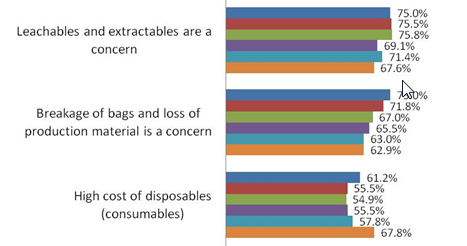 However, a “positive” trend coming from our preliminary results is that concerns over L&E are no longer the single most critical reason for not increasing use of disposables, as indicated by past years’ studies. This year, it appears L&E concerns are being slowly supplanted by a couple other critical reasons restricting single-use adoption: breakage of bags and loss of production and inability to change current systems due to regulatory reasons.

Nevertheless, that doesn’t mean that L&E issues are resolving. In fact, data from our survey show that disposables’ users continue to be dissatisfied with their vendors when it comes to L&E. Currently, almost 9 in 10 disposables users surveyed to date consider it either very important (55%) or important (32%) that vendors provide L&E data that regulators will accept. And yet fewer than one-third are satisfied with their vendors in this regard. The percentage gap between importance and satisfaction in this area (55%) is the second-largest gap of all vendor satisfaction and selection factors that we measured, behind only the costs of the products themselves.

Disposables users are also dissatisfied with vendors’ performance when it comes to L&E testing using their current systems. While fewer (73% of) respondents to date see this as an important single-use vendor attribute, fewer than half of those respondents are satisfied with their vendors in this area, which is one of the lowest satisfaction rates we’ve measured so far.

The magnitude of this problem is brought into light when we consider the value of usable L&E data. According to early results from our survey, almost 7 in 10 biomanufacturers would pay more if their single-use device supplier provided them with “usable” L&E data for their single-use/disposable device applications. For the largest share of respondents—31%—usable L&E data is valuable enough to warrant a 10% price increase, but an even larger percentage of respondents to date would be willing to pay upwards of 25% more for such data. Clearly, end-users are expecting more from vendors when it comes to L&E data.

Meanwhile, those in the industry hoping that suppliers can provide some answers may be disappointed, at least for the time being. To date, only 1 in 8 industry suppliers have cited L&E testing as a top new technology or new product development area their companies are working on in the biopharmaceutical manufacturing industry. That figure does not represent an appreciable increase from last year’s result and demonstrates that (perhaps unsurprisingly) suppliers are prioritizing innovation in disposable product over L&E testing, such as bags/film, bioreactors, and connection technology. Still, new approaches are emerging, such as Aptar Stelmi’s recent announcement of a new range of coated stoppers that are expected to act as a barrier to several leachables and ex-similar advances are likely to be adopted in the biomanufacturing space as well.

Finally, there are regulatory issues to consider in this equation, as there are no standardized methods or approaches for measuring and assigning values to the different types and severities of toxicity problems. More than 4 in 10 end users to our survey so far agree that the lack of clear regulatory guidance on L&E may restrict their use of disposables. Currently, respondents are not in agreement when it comes to which industry body should establish standards for L&E. This, in itself, suggests a continuing lack of clarity on the part of many in the industry regarding how standards can or should be set.

Our preliminary 12th Annual Study data demonstrates that concerns over L&E continue to permeate the industry and that vendors aren’t fully addressing end users’ expectations. Concerns regarding L&E, particulates, and other crucial elements, once tackled, will result in increased penetration of single-use devices in commercial scale manufacturing, where applications will grow significantly.

Eric S. Langer is president and managing partner at BioPlan Associates, Inc, a biotechnology and life sciences marketing research and publishing firm established in Rockville, MD in 1989. He is editor of numerous studies, including "Biopharmaceutical Technology in China," Advances In Large-Scale Biopharmaceutical Manufacturing," and many other industry reports. He can be contacted at:

Survey Methodology: The 2015 Twelfth Annual Report and Survey of Biopharmaceutical Manufacturing Capacity and Production yields a composite view and trend analysis from over 250 responsible individuals at biopharmaceutical manufacturers and contract manufacturing organizations (CMOs) in 30 countries. The methodology also included over 150 direct suppliers of materials, services and equipment to this industry. This year's study covers such issues as: new product needs, facility budget changes, current capacity, future capacity constraints, expansions, use of disposables, trends and budgets in disposables, trends in downstream purification, quality management and control, hiring issues, and employment. The quantitative trend analysis provides details and comparisons of production by biotherapeutic developers and CMOs. It also evaluates trends over time, and assesses differences in the world's major markets in the U.S. and Europe.

If you want to learn more about the report, please go to bioplanassociates.com