Technological advances in genetic engineering, particularly expression systems (the genetically modified cells that express desired proteins), process design, and equipment continue to be combined such that the same amount of drug product can be manufactured at a much smaller scale. Today, smaller-scale, less-expensive equipment is permitting more rapid drug development and production in smaller facilities.

Because bioprocessing for drug products is generally “lockeddown” early in development, the reported clinical supply yields more reflect the current state-of-the-art for new bioprocesses. It must be kept in mind that, at any time, the great majority of commercial-scale manufacturing involves established products with their original bioprocessing usually developed decades ago, with these facilities operating at much lower titres than now reported for new processes.

Only about a decade ago, expression yields of up to 1 gram/ Liter were considered truly state-of-the-art. Many older products, including many current blockbuster (≥$1 billion/year sales) monoclonal antibody products, such as those originally developed in the 1980s, were developed with yields of only a few tenths gram/Liter. This generally required multiple≥10,000 L bioreactors operating continuously for commercial manufacture. Many of the largest biopharmaceutical facilities now have excess capacity, with legacy facilities either being taken offline, refurbished, or used to provide CMO services, manufacturing products for other companies.

About 3 grams/L yield could soon become the future reference standard for monoclonal antibody and other mammalian cell-based manufacture, with further steady growth likely. At 3 grams/L, a single-use 2,000 L bioreactor production run can provide ~6,000 g or 6 kg of protein, with even a low-potency, cheaper product providing sales approaching $100 million. If larger amounts of product are needed to support sales, multiple single-use process lines can be run in parallel. For comparison, a yield of 0.6 gram/L would require 10,000 L capacity, e.g. a 10,000 L stainless steel bioreactor to manufacture the same amount of product. Operating at higher yield and lower scale to produce the same amount of product provides savings in many areas, including culture media and other supplies, space, utilities, infrastructure/support, and labor.

Attaining even higher yields in mammalian systems at large scale, such as ≥5 grams/L, is becoming much more attainable. Some CMOs are now offering routine monoclonal antibody scale-up at high yields. For example, the PER.C6 cell line development joint venture of DSM and Crucell (now the Center for Vaccines, Johnson & Johnson Co.) has reported a record level titre of over 30 grams/L harvest for an antibody product. Presuming yields of just 10 grams/L will be attainable in practice at commercial scale in coming years, a 1,000 L bioreactor will be able to match the output of four 2,000 L bioreactors operating at the current state-of-the-art of about 2.5 grams/L or a 10,000 L bioreactor operating at 1 gram/L.

Continuous Processing Improvements on the Rise
Besides improvements in genetic engineering of cell lines and adoption of single-use systems, the industry is seeing rapid adoption of perfusion, using pumps and filters or other methods to increase the concentration of cells and expressed products within bioreactors, with this further increasing productivity. Other improvements contributing to increased expression yields include improved culture media and process design, with both culture media selection and bioprocessing design now often optimized by drug-like screening using micro-wells as model bioreactors, and bioprocesses better-monitored and -controlled using new and improved sensors and control systems.

Increases in expression yields, besides reducing costs and making manufacturing simpler, are having other impacts in the biopharmaceutical industry:

Ever-improving process yields, particularly when combined with other recent major advances in bioprocessing, such as the adoption of single-use rather than stainless steel systems for manufacture, are providing increasing efficiencies in bioprocessing, dramatically reducing the scale and costs for biopharmaceutical manufacture. Combined with advances in expression systems engineering (such as cell line development, media optimization, and metabolic engineering), we expect to see continued increases in volumetric titres and yields. 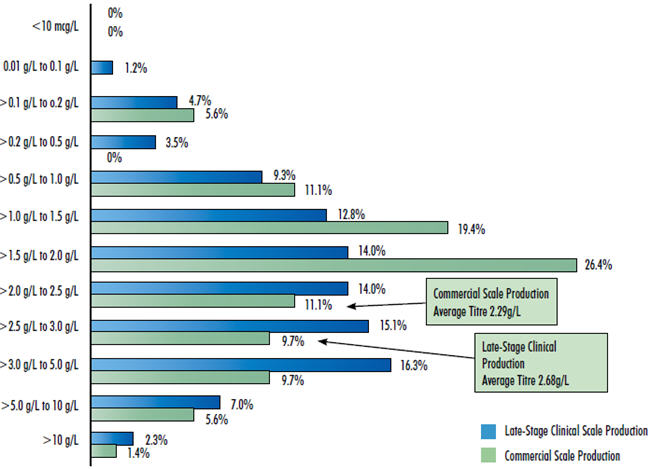 The 2013 Tenth Annual Report and Survey of Biopharmaceutical Manufacturing Capacity and Production yields a composite view and trend analysis from over 300 responsible individuals at biopharmaceutical manufacturers and CMOs in 29 countries. The methodology included over 150 direct suppliers of materials, services, and equipment to this industry. This year’s study covers such issues as: new product needs, facility budget changes, current capacity, future capacity constraints, expansions, use of disposables, budgets in disposables, trends in downstream purification, quality management and control, hiring issues, and employment. The quantitative trend analysis provides details and comparisons of production by biotherapeutic developers and CMOs. It also evaluates trends over time and assesses differences in the world’s major markets in the U.S. and Europe.

If you want to learn more about the report, please go to bioplanassociates.com.