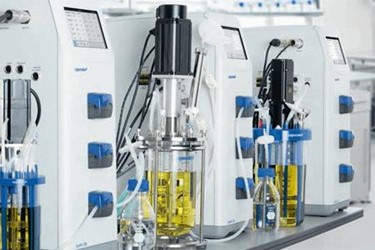 We used the BioFlo 120 bioprocess control station for the fed-batch fermentation of a GFP-expressing Escherichia coli strain. To quantify cell density and protein production we measured the optical density (OD600) of the culture and the fluorescence of GFP, respectively. After nine hours of culture, the optical density had increased to 191 and the relative fluorescence units (RFU) to 12,532. These results indicate that the BioFlo 120 supports the growth of E. coli to high densities and the production of large amounts of protein.