Halozyme Gets FDA OK For 2 New Production Sites For Hylenex 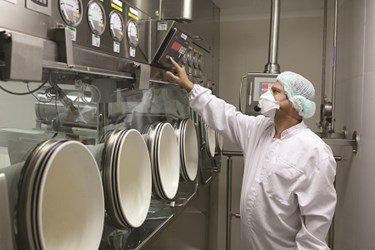 Biopharmaceutical company Halozyme Therapeutics announced that it has received the approval of the U.S. Food and Drug Administration (FDA) for its new contract manufacturing facilities that will be used to produce Hylenex recombinant (hyaluronidase human injection). The FDA approved the use of the Cook Pharmica manufacturing site located in Bloomington, Indiana to produce rHuPH20, Hylenex’s active ingredient. The federal agency also approved the Patheon facility located in Greenville, North Carolina, for production of the finished Hylenex.

Hylenex recombinant is a tissue permeability modifier approved as a drug adjuvant to boost the dispersion and absorption of injected or subcutaneously infused drugs. The adjuvant is used to administer subcutaneous fluid and is used in subcutaneous urography, as well.

Dr. Helen Torley, President and CEO of Halozyme, said, “The approval of new production sites enables us to substantially increase our manufacturing capacity for Hylenex recombinant. Furthermore, the approvals… ensure continuous supply of active ingredients and finished commercial drug products which are essential for our core strategy to commercialize our own proprietary products as well as partner our rHuPH20 technology with innovative companies.”

Halozyme has established a partnership with Baxter Healthcare for the development and production of Hylenex. In 2007, the companies expanded their existing collaboration to include the use of Hylenex with Baxter’s proprietary and non-proprietary small molecule drugs. Baxter agreed to pay Halozyme a total of $30 million in upfront payment and equity investment. Baxter also agreed to assume all costs of development, production, clinical, regulatory, and commercialization costs for Hylenex recombinant.

In 2010, Halozyme and Baxter issued a voluntary recall of Hylenex after the discovery of small flake-like glass particles in several vials of the product. The affected lots, estimated to be around 3,500 vials, were manufactured at Baxter’s production site. No medical reports or adverse events were reported at the time of the voluntary recall.