The genome editing market is estimated to reach $3.5 billion in 2019 — an increase from $2 billion in 2014 — with a CAGR of 13 to 14 percent.1,2 The factors driving this market include increased R&D funding for genomic research, a growing demand for synthetic genes, new technologies in genome editing, and high utilization in plant breeding. However, high regulatory stringencies, lengthy approval processes, and ethical issues associated with the fear of genetic research hamper market growth. This article examines the utilization of genome editing tools and technology and their impact across the drug discovery industry.

Developing an effective and consistent method to make accurate, targeted genome changes has been a pending goal for researchers. Gene or genome editing is a form of genetic engineering in which “molecular scissors” are used to edit (insert or delete) genes at a particular location of the genome. Genetic diversity lost due to domestication can be reverted through the non-transgenic, precision gene editing tools. Applications include editing genes for treating genetic diseases, finding genes responsible for a particular trait or illness, and editing human embryos.

The most common molecular scissors include zinc finger nucleases (ZFNs), transcription activator-like effectors nucleases (TALENs), and clustered regularly interspaced short palindromic repeats-Cas system (CRISPR-Cas). Even though technologies such as TALENs and ZFNs are in practice, they are expensive and more time-consuming processes than CRISPR in terms of design and structure. The latest CRISPR uses easy-to-build nucleic acids to edit genes; TALENS and ZFNs use proteins, which are difficult to build. Since 2015, more than 16,000 research studies have been published related to CRISPR technology.3

Academics — The Pioneers In Genome Editing

Academia has always been the forerunner in the field of genome editing. The University of California and the Broad Institute of MIT and Harvard were pioneers in the field and the two universities entered into a patent battle for CRISPR technology. After a legal struggle, a patent for CRISPR technology was granted to the Broad Institute, but the University of California’s patent application had been transferred to an examiner. Researchers from these universities have formed several genome editing companies, and major pharmaceutical, biotech, and technology firms have licensed genome editing for clinical and research applications. 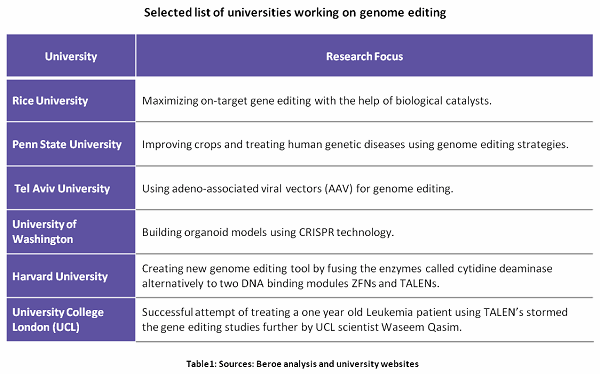 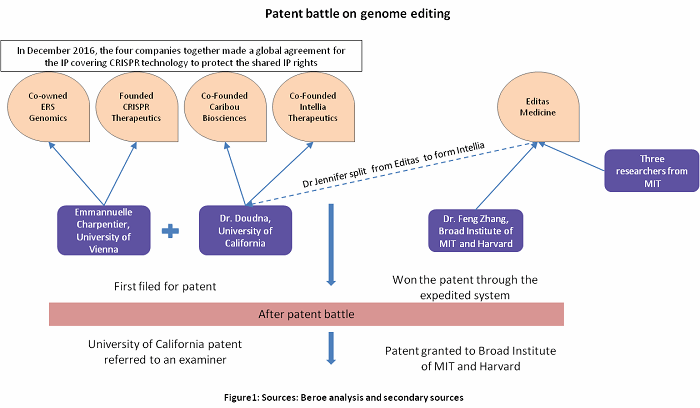 CRISPR is viewed more as a targeting tool rather than editing since it targets specific locations in genomes. Genome editing has a much broader application scope in human health than in agriculture and animal health. It is used in the preclinical, drug discovery, and early clinical stages of pharma’s drug development cycle. Some key applications include diseases of genetic deposition and chronic diseases, target discovery, identification, and lead optimization.4,5

CRISPR-based screening is gradually replacing RNA interference-based screening. The former has the advantages of a complete knock down of the target, whereas the later provides only a partial knock down.6CRISPR technology is used to understand the survival patterns of pathogens such as Zika and dengue viruses, as well as to build better animal models by introducing a set of mutations that accurately resemble a human environment for preclinical studies. The time and cost for building complicated animal models are reduced using CRISPR technology.7,8

Epigenetic studies have been simplified by using CRISPR-Cas9 technology for targeted epigenome editing, as epigenetics enables understanding the missing pieces of puzzle in the central dogma of molecular biology. Eventually, these epigenetic studies could close research gaps and pave the way for future research prospects.9

Genome Editing can be used in every stage of drug discovery — starting with using CRISPR gRNA libraries for target discovery through high throughput screening to CRISPR mediated endogenous tagging. This enables better research outcomes through high content imaging assays.10Tables 2 and 3 and Figures 2 and 3 summarize the key partnerships and developments around genome editing. 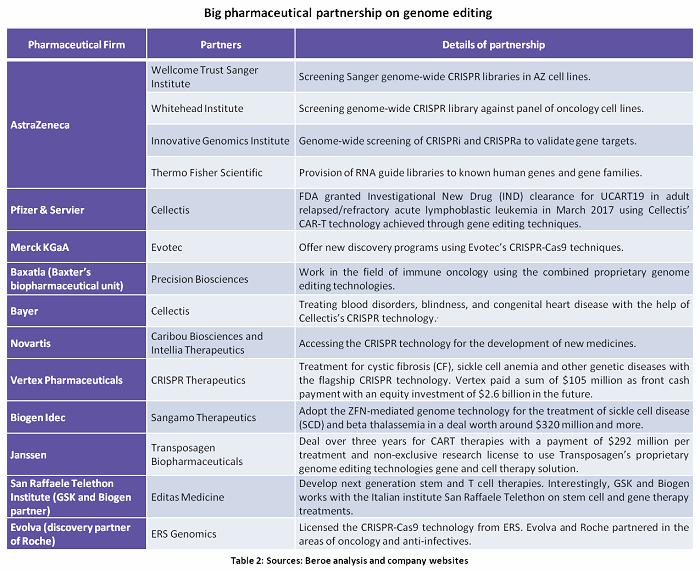 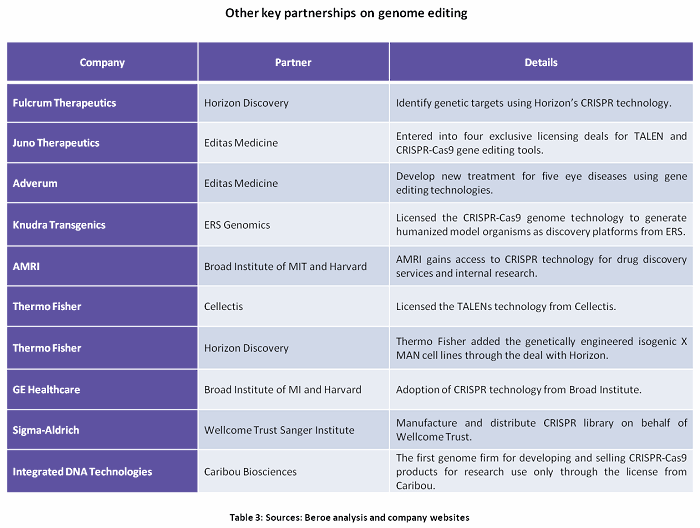 With respect to the U.S., human medicinal products that undergo gene editing for therapeutic purposes, such as gene therapy, are regulated under the biological product framework. The FDA’s Center for Biologics Evaluation and Research (CBER) has a well-established set of rules for gene therapy products. Also, an appropriations bill for the fiscal year 2016 restricted funds for research on modified or altered human embryos involving heritable changes.11 The first approval for conducting clinical trials in humans with CRISPR technology has been approved. However, trials for earlier technologies, such as ZFN on HIV patients, had been already started in 2014.12,13

In general, the USDA is not regulating gene edited crops; regulations for genome edited animals came early this year. The latest guidance from the FDA’s Center for Food Safety and Applied Nutrition and the Center for Veterinary Medicine recommends that gene edited animals undergo safety and efficacy measures the same as a new drug.11,14 The USDA takes a product-based regulatory approach, in which the concern is over the risk associated with the final product, rather than the technology linked to it.15

According to the European law, genome editing is restricted, as it is still considered to be part of genetically modified crops. The decision on gene editing by European executives — whether to include it under the strict banner of GMO — is still pending.16

Gene editing techniques come with their own limitations. This includes associated errors, such as off target episodes that result in unwanted mutations or even in fatal results. At the same time, a lot of uncertainties exist about the impact of genome edited organisms on the environment and health. Genome editing of developing embryos still provokes ethical debates. Even though the gene editing tools do not involve foreign DNA, it distorts the fundamental genetic makeup.

However, within a short span of time, genome editing has shown great promise to be a successful innovation, with remarkable rates of research reaching new heights in various applications in the field of drug discovery, crop science and animal health. Mounting investments, including millions of dollars for gene editing startups, further fuel innovation, with products from these firms expected to enter the market in the coming years. Genome editing is one of the latest technologies with potential applications in the field of pharma/biotech, basic research, and animal and plant breeding/agriculture that could make disruptive changes in the future. Despite an ongoing patent war and ethical concerns, and few clinical trial outcomes, genome editing seems to be a light at the end of the tunnel due to its rapid innovation and scale of application.

Hemamalini Kulasekaran is a senior analyst of pre-clinical research for Beroe Inc. She started her career as a research executive working on recombinant human epidermal growth factor (EGF). Hemamalini received her master’s in medical molecular biology from the University of Westminster and previously was with a healthcare market research firm. She is also an engineer with a background in biotechnology and has written publications related to R&D and procurement opportunities. You can contact her at hemamalini.k@beroe-inc.com.