Lambda phage—the workhorse of molecular biology since its earliest days—is back in the limelight again, or at least portions of it are back. The new millennium will find lambda recombinase at the heart of a novel cloning system offered by Life Technologies Inc. (Rockville, MD). This cloning technology, termed GIBCO BRL GATEWAY Cloning Technology by its developers at Life Technologies, will free you of tedious overnight ligation assays, and reduce your reliance on restriction enzymes. Moreover, the GATEWAY cloning system should significantly speed your ability to construct new expression clones of your cDNAs or other ORFs and network a large number of independent technology platforms.

What Is GATEWAY Cloning Technology? (Back to Top)
GATEWAY Cloning Technology is a universal system for cloning and subcloning DNA fragments—universal in that all manner of DNA fragments can be cloned (cDNAs, genomic DNA, PCR fragments) into virtually any kind of vector (expression, sequencing, viral, plasmid). And once present in the GATEWAY system, a sequence can be transferred into any other GATEWAY vector while maintaining reading frame and orientation by simply adding proteins, incubating, and transforming E. coli. In addition, virtually any standard vector can be readily made GATEWAY compatible.

At the heart of the GATEWAY Technology is the lambda recombination system, which is used to move fragments between vectors that contain recombination sites for the lambda recombinase machinery. Once your fragment or library has entered the GATEWAY system, moving fragments to any other GATEWAY vectors becomes a simple matter. As a result, you can clone into any number of vectors at once, should you choose to, which significantly speeds up the whole cloning enterprise, particularly when attempting to express proteins. 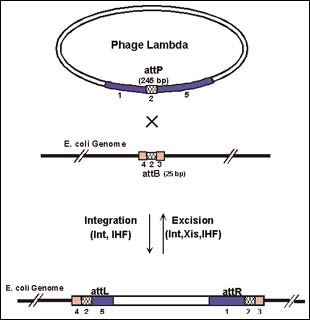 The GATEWAY Technology recreates the lambda recombination reactions in vitro through a cocktail of recombination proteins and a set of vectors containing the att sequences they recognize. Two main pathways are involved. In one, the LR reaction, a cDNA or other DNA sequence flanked by attL sites is transferred by recombination from an Entry Clone into a Destination Vector, which contains attR sites. In this process, the Destination Vector conveys some functionally useful elements, such as a promoter, fusion tag, new replicon, or selection marker, to the final recombination product. The resulting molecule, called an Expression Clone, is a subclone of the starting DNA sequence, correctly positioned (same orientation and reading frame) in a new vector backbone. Life Technologies plans initially to offer nine types of Destination Vectors, for native protein and His6- or GST N-fusions in E. coli, insect cells, and mammalian cells. Additional GATEWAY-compatible vectors will continue to become available (for a myriad of applications). Ultimately, essentially any vector-containing technology can be compatible, allowing clones selected from one assay system to be "automatically" transferred into other systems for further analysis.

The second GATEWAY pathway is the BP reaction, in essence the reverse of the LR reaction. The BP reaction transfers a DNA insert, flanked by 25 bp attB sites, from an Expression clone, into a vector donated by a plasmid containing attP sites. The final product is an Entry Clone containing the transferred DNA sequence. Using this approach, DNA segments can be transferred into and out of Entry Clones and Expression Clones at will, making the system completely open ended. An important application of the BP reaction allows rapid, efficient, directional PCR Cloning. For this, a PCR product made using primers with 5'-terminal attB sites is recombined in the BP reaction with an attP plasmid to generate an Entry Clone of the PCR product. The resulting construct can be used to further transfer the cloned DNA into any number of Destination Vectors.

Getting Started—Entry into the GATEWAY Technology (Back to Top)
There are a number of approaches to get DNA segments into the GATEWAY Technology. As noted above, Entry Clones are generated following cloning of attB-PCR products. Entry Clones also can be derived from Expression Clones. Examples of these are Life Technologies cDNA libraries made in a CMV expression vector (pCMVSPORT 6.0) where attB sites flank the cDNA inserts. These libraries (and tens of thousands of clones) are already available in conjunction with the National Cancer Institute's Cancer Genome Anatomy Project. Large numbers of full-length open reading frames from many model organisms arrayed as Entry Clones are also under construction. Watch for an announcement regarding the collaborations involved in this.

Entry Clones also can be prepared with standard approaches using restriction enzyme and ligase. Life Technologies Inc. currently offers five different Entry Vectors for this purpose, providing an assortment of restriction sites for inserting your DNA sequence, or the presence or absence ribosome binding sites. Likewise, Entry Clone cDNA libraries can be prepared in an Entry Vector, something Life Technologies Inc. is likely to do in the future. 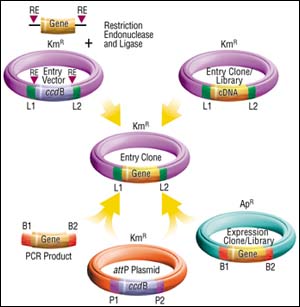 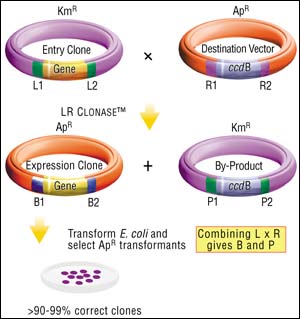 GATEWAY Cloning Technology—An Open Cloning System (Back to Top)
The possibilities for the final product, the Expression Clone, are almost endless. You can clone into an E. coli expression vector, a baculovirus expression vector, or a mammalian expression vector, each with a choice of N-terminal-6X His, N-terminal-GST, or native protein. You can clone into these vectors one at a time or into all nine at once. You can also convert your own expression vectors into GATEWAY Destination Vectors, simply by ligating a blunt-ended cassette (attR1-Cmr-ccdB-attR2) into the Multiple Cloning Site of your vector and screening for the correct orientation. From then on, your cloning chores are over. Simply mix your Destination Vector with the Entry Clone containing your gene, incubate with LR CLONASE Enzyme Mix, and transform any standard E. coli strain. Your gene is now in your expression vector. Typically >99% of the colonies you obtain will contain your clone, in the right orientation and reading frame, ready for the next step in your project.

The price for all this speed and convenience is that att sites flank your gene. Of the four kinds of att sites used in the GATEWAY Cloning Technology, only the attB sites that flank your gene in the Expression Clones are of any consequence. Fortunately, these are small (25 bp) and lack the hairpin structure of the loxP sites of the Cre/lox system (so expression levels remain high). The Life Technologies folks have taken out all the stop codons and made new specificities, so the attB sites are highly specific and don't have any noticeable effect on protein expression. In fact, translation across the attB sites doesn't even seem to change the in vivo protein-protein interactions of the yeast two-hybrid system.

Beyond that, there are two recombination cocktails to keep track of, the BP CLONASE for cloning PCR products or moving your gene back out of an Expression Clone, and the LR CLONASE for moving your gene from an Entry Clone into any of the Destination Vectors. No cutting, no polishing, no phosphatasing, no gel purifications, no digests for orientation, etc., etc., etc. The reactions are so simple; they've been automated.

Any Legal Stuff to Worry About? (Back to Top)
Not for the academic researcher. Industrial types don't need to do anything up front (if doing research), and nothing at all until the volumes of CLONASE Enzyme Mix get pretty serious. Then there are licenses to arrange, but no royalties or reach through. There are licenses for commercial use of the system.

View from the Laboratory (Back to Top)
To create a set of usable reagents representing an entire genome-worth of information, in this case, C. elegans, Vidal has turned to Life Technologies' Gateway technology. With this technology, he is creating a "macro-array" of all the open reading frames from his model organism—the ORFeome, they call it—which can then be produced in defined expression systems, the exact nature of which would vary depending on your purpose. You might choose yeast, for example, when you want to look at protein interactions through two-hybrid systems, or E. coli, when protein isolation is a goal.

Vidal has set out to insert most of the approximately 19,000 C. elegans ORF's into Gateway vectors using PCR products from a cDNA library, so chosen to generate expression-ready fragments (i.e. exons only, from the ATG to the stop codon). Special primers are constructed for each ORF that flank the coding region of the cDNA and with an additional 25 bases of attachment sequence to create a PCR fragment with wheels—one that will go directly into a Gateway Donor vector.

When contemplating numbers in the tens of thousands, efficiency and ease of use become issues. With Gateway, Vidal is racking up 80–90% success rates, with a low percentage of incorrect insertions. In addition, he has automated the process, from the design of the primers to the Gateway reaction themselves, which are conducted in 96-well plates and moved about robotically. While to date, Vidal's group has cranked out 300 ORF's, they are gearing up to do 400 per week in the new millennium, all of which will be available to any researcher who desires them.

Vidal is thinking long-term, and sees Gateway as a simple yet flexible system that could be taken in whatever direction the future holds.

So... When? (Back to Top)
The first round of GATEWAY Cloning Technology product releases is due in December of '99, with more vectors and systems to come.