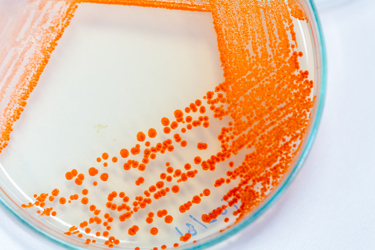 The biopharmaceuticals market has grown consistently over the last decade at 12 to 15 percent, and cell culture media markets have mirrored that growth. Progress in research and development, increased FDA approvals, and continued innovation have contributed to the growth of this market. Innovative therapeutics such as cell and gene therapy products, as well as affordable biosimilar drugs, are also driving the biopharma revenue.

We also found that culture media ranks fourth in terms of areas where survey respondents would like to see suppliers make improvements and where they should focus R&D efforts (see Figure 2). 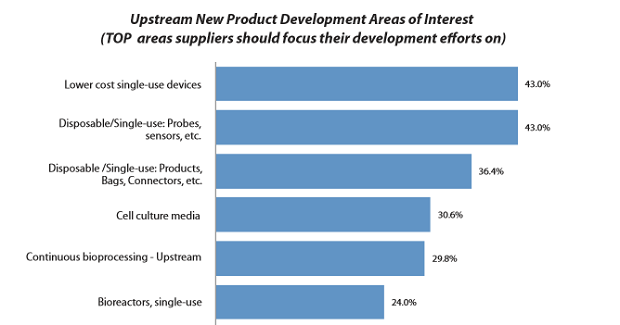 Keeping up with the biopharma approvals, the bioprocessing market segment has grown remarkably consistently for the past 15 years. BioPlan has been measuring supplier performance at between 12 and15 percent annually.

For decades, culture media have been almost exclusively reconstituted and formulated from ground powders (vs. purchased as finished liquids). Recently, with the emergence of single-use facilities, including new cellular and gene therapy facilities, there has been a rise in adoption of outsourced liquid media. But overall, the percentage by volume remains low, with DPM continuing to thoroughly dominate the market.

According to BioPlan’s research, we estimate that the current worldwide bioprocessing culture media market size (annual revenue) is about $1.4 billion. An estimated ~95 percent (by revenue) or ~$1.33 billion/year of biopharmaceutical culture media is sold/purchased in the form of dry powdered media (DPM). The remainder is a small but rapidly growing market for outsourced delivery of media manufacturer-prepared liquid media.  The liquid media sold by media manufacturers or custom prepared by CMOs almost always involves conventional preparation of liquid media from DPM. Packaging of DPM has traditionally been seen in two major forms: drums and media bags. Even in the drums, powder media is packaged within single-use plastic bags held within drums or other rigid shipping containers. Although some media manufacturers commonly manufacture powders in ≥10,000 L batches/lots (i.e., grinder capacity), the powders are generally packaged in 200 L (~55 gallon) or smaller drums for ease of shipping and handling.

The DPM bags are generally rather robust, have handles, and include an integral powder handling outlet, with bags generally ranging up to 25 kg (55 lbs.), essentially the upper limit for staff being able to handle them. Bags are meant to be manually handled and are generally stored hung in racks. Most customers prefer large bags to save money, with most repeatedly withdrawing media from bags (and drums) as needed for preparation.

Drums and other rigid containers, in contrast with the bags, generally hold much larger volumes, and their handling, emptying, etc. often requires use of forklifts, specialized drum lifting/emptying machines, or other mechanical equipment, or manual shoveling of media for mixing. The larger a facility’s bioprocessing capacity (total bioreactor volume), such as a 10,000 L bioreactor using about 250 kg (550 lb.) of culture media/batch, the more likely it is using media in drums vs. bags. Drums/rigid containers almost always have a simple plastic bag liner that holds the culture media, to better allow for periodic repeated manual withdrawal of media and resealing, but generally lack the integral powder-handling outlet included with bags.

In general, most bioprocessing facilities use drums/rigid containers, and larger facilities, particularly those that are stainless steel-based, often use large drums. However, DPM bags are emerging as popular choices for single-use and smaller facilities, and that smaller market for media in bags is growing faster than the market for drums. This includes nearly all new single-use facilities, including cellular and gene therapy facilities, almost exclusively adopting bags, if not outsourcing purchases of finished liquid media. Overall, bags are mostly associated with single-use, while drums are mostly associated with stainless-steel process lines or other larger scale use.

BioPlan’s Top1000Bio database2 now reports a total of 16.6 billion L of bioprocessing capacity worldwide for >1,600 facilities.  We used these data to further estimate annual culture media consumption. The more than 1,100 facilities with ≥500 L total bioreactor capacity are presumed to be the primary market for culture media and can be assumed to perform clinical trial or commercial scale manufacturing at GMP standards. Average annual use for the ≥500 L facilities is ~400 kg/year, with average annual facility expenditure for DPM ~$1.25 million/year.

Culture media preparation methods have not changed over the years and do add some risks to bioprocessing. This includes powder weighing, dispensing, and mixing, each of which can have huge impacts on the resulting hydrated media’s chemistry, performance, and shelf-life. Additionally, the steps involved in culture media preparation from DPM are generally not performed as a fully closed, sterile, or even aseptic process, with liquid media typically being prepared by manually removing DPM from drums (by shoveling) or bags (by pouring), open to the air. The powder is manually handled by staff, with mixing often done with exposure to air. Mixing is generally done with no prior virus inactivation or sterilization, such as use of high temperature-short time (HTST) rapid heating and cooling of media.

On the other hand, bulk powders have the advantage of a much longer shelf-life over outsourced preprepared liquid media. DPM containers can be reused (i.e., media removed for mixing) multiple times and stored for long periods, generally years, while liquid media has a shelf life of at most weeks and is generally delivered on as as-needed or just-in-time basis. DPM users can also prepare many batches/lots of hydrated culture media from the same stored powder container.

According to BioPlan’s research, the trend for increased use of delivered preprepared liquid media is continuing, with a growing portion of new facilities, including nearly all new cellular and gene therapy facilities, adopting outsourced liquid media. But overall, the percentage by volume remains low, with DPM continuing to thoroughly dominate the market.

Some other trends that are driving the use of DPM bags include:

and smaller facilities and footprints, especially in new facilities, and smaller product markets are resulting in higher demand for culture media markets.

Preparation of culture media from powders is a critical step in bioprocessing. Powdered culture media are cost-effective and will thus remain the leading market segment, especially for larger-scale bioprocessing (the bulk of the market), at least for the foreseeable future.

Kamna Jhamb is director of technical research at BioPlan Associates. With a Ph.D. in biotechnology/microbiology, she has extensive experience working in several key facilities, including the Lawrence Berkeley National Lab (LBNL). Her specialized expertise lies in primary and secondary research, competitive intelligence, and market analysis of healthcare and biopharma segments. She has contributed to several international publications and journals. You can reach her at kjhamb@bioplanassociates.com or 301-921-5979.