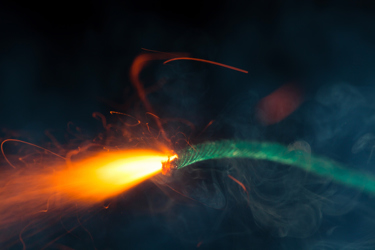 As the pharma industry scrambles to develop one or more viable COVID-19 vaccines, the greatest hurdle to immunizing the world’s population is the manufacture of billions of doses in parallel. The time pressure to end the pandemic means that we must prepare for commercial-scale manufacturing now, even though the vaccine candidates use many different, incompatible production platforms and there is no clear winner yet.

In response to this challenge, vaccine developers are signing an unusual number of outsourcing agreements with contract manufacturing organizations (CMOs) and other service providers. In 2018 and 2019, oncology drugs were the most popular therapy for contract manufacturing agreements, but this has flipped to infectious disease in 2020 as a result of the pandemic. Meanwhile, governments and NGOs recognize the scale of the manufacturing challenge and are spending billions to fund scale-up of production, even before a vaccine has hit the market.

There are 380 vaccines in development for COVID-19, of which 32 are in Phase 2 or Phase 3 clinical development.  Only one has regulatory approval: Russia’s home-grown Gam-COVID-Vac recombinant vector vaccine is approved in Russia.

The majority of these late-stage candidates are inactivated vaccines or use messenger RNA (mRNA) or DNA technology. To date, no mRNA vaccines have been approved; biopharma company Moderna and a collaboration between BioNTech and Pfizer are furthest in development with this platform. In theory, these vaccines can be manufactured more quickly than traditional platforms. 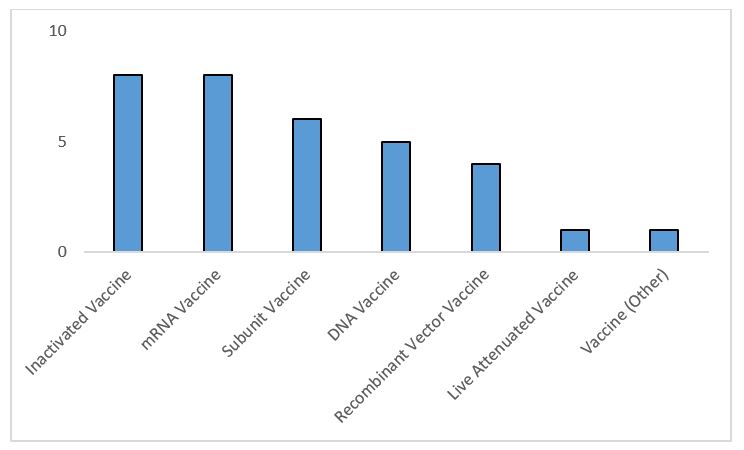 Both small biotech companies with early-stage vaccine candidates and larger companies with late-stage products rely on outsourcing to CMOs. The smaller companies lack manufacturing capabilities, so they have no choice but to use external suppliers, and even the largest companies require extra resources to produce the billions of doses needed should their candidate be approved. Vaccine sponsors as large as AstraZeneca and Johnson & Johnson are using CMOs for their pipeline vaccines. 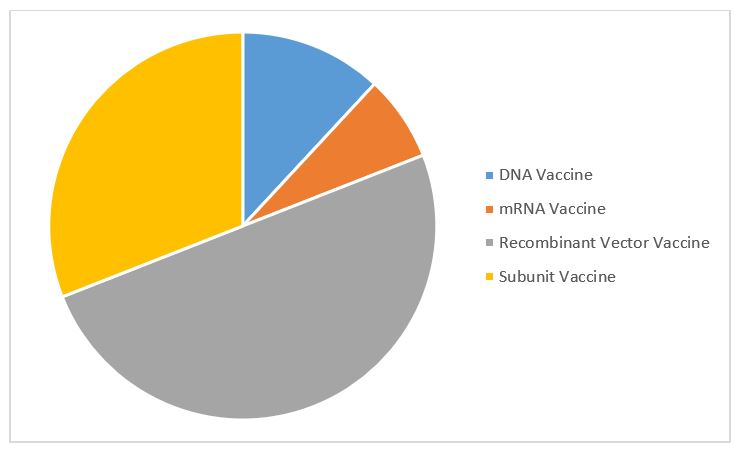 Most contract manufacturing service agreements are for recombinant vector vaccines, followed by subunit vaccines. This is despite the fact mRNA vaccines dominate the top COVID-19 vaccines. There are few mRNA outsourcing agreements relative to the number of mRNA candidates because of the novelty of this unproven technology. Few CMOs have the capability to produce active pharmaceutical ingredients (APIs) for mRNA vaccines, not least because they are unique and patented. For dose manufacturing of COVID-19 mRNA vaccines, sponsor companies are opting to partner with manufacturers rather than outsource to CMOs.

Vaccine developers are choosing CMOs close to home for their COVID-19 vaccine manufacturing: the U.S., U.K., and Germany are the most popular supplier locations. These supply chains contrast with the general trend within the pharma industry to outsource production to China and India, especially for low-cost, high-volume orders and generics.

The vaccine candidate with the most manufacturing agreements is AstraZeneca’s AZD-1222, a recombinant vector vaccine in Phase 3 development. Trials of the vaccine were suspended worldwide in September due to a suspected adverse event in one patient but have now resumed in five countries; the company is still in talks with the FDA to resume in the U.S. The drug has manufacturing agreements with 12 service providers, including major players Catalent, Emergent BioSolutions, and Novasep, as well as pharma company Merck KGaA, which is performing excess capacity manufacturing.

The CMOs benefiting most from COVID-19 vaccine development so far are Emergent BioSolutions and Catalent, which each have four manufacturing deals, including with AstraZeneca and Johnson & Johnson, but the real winners will emerge when the major markets grant regulatory approval.

Large pharma companies are also investing in captive capacity. Pfizer plans to manufacture millions of doses of BNT162, the COVID-19 vaccine it is developing with BioNTech “at risk” by the end of 2020, and hundreds of millions of doses in 2021. The vaccine will be made at Pfizer’s sites in Massachusetts, Missouri, and Michigan. Pfizer is pushing many of its internally manufactured drugs out to CMOs to free up space.

In the U.S., “Operation Warp Speed” is a $10 billion initiative funded by the federal government, with significant military involvement to support the production of 300 million COVID-19 vaccine doses by early 2021. Nine candidates have been chosen to date. 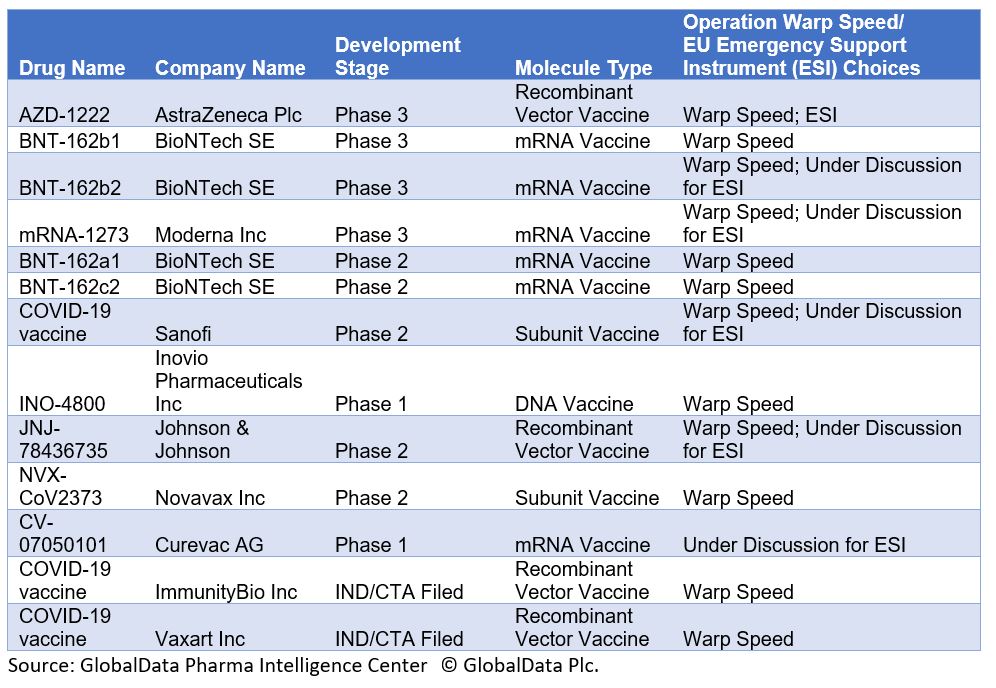 Operation Warp Speed’s timeline for the production of such a high number of vaccine doses with candidates only in Phase 1 or Phase 2 trials is very optimistic, given that vaccine developments have required a minimum of five years in the past. The initiative picked seasoned vaccine developers, which is a logical approach; however, it did not explain the criteria behind its choices. Most candidates are not manufactured using traditional approaches, like inactivated or subunit vaccines. Instead, two vaccines use mRNA technology.

On August 5, the federal government announced $1 billion in funding for Johnson & Johnson's (Janssen) vaccine candidate. On August 11, the government granted up to $1.5 billion for Moderna's candidate.

Over in Europe, the European Commission has launched a €2.7B ($3.22 billion) Emergency Support Instrument (ESI); one of its tasks is to fund manufacturing costs through advance purchase agreements with individual vaccine companies on behalf of EU countries. In return for the right to buy a specified number of vaccine doses in a given time frame and at a given price, part of the up-front costs faced by vaccine producers will be financed from the ESI. The ESI has been more reticent than Warp Speed about its picks but signed its first agreement on August 14 to purchase 300 to 400 million doses of AstraZeneca’s vaccine. It is also in talks with Sanofi-GSK and Johnson & Johnson.

The U.K. has rejected the EU's scheme and has signed separate deals with GlaxoSmithKline, Sanofi Pasteur, BioNTech/Pfizer, and Valneva. Japan is planning to order 521 million vaccine doses by 2021 (for a population a quarter of that size) and has struck deals with AstraZeneca, Pfizer/BioNTech, and Shionogi, which is developing a discovery-stage unnamed vaccine.

Separately, the WHO, the Gavi vaccines alliance, and the Coalition for Epidemic Preparedness Innovations (CEPI) are running COVAX, a procurement scheme for high-, middle-, and low-income countries. So far, more than 150 countries including the EU, China, and Japan have signed up, but the U.S. has not joined the alliance. Higher-income countries will pay upfront by October 9 to reserve their doses; these funds will pay for manufacturing scale-up. Nine candidate vaccines are currently being supported by CEPI with the aim of at least three viable vaccines. COVAX next plans to start signing formal agreements with vaccine manufacturers and sponsors to secure 2 billion doses by the end of 2021.

This article has been adapted from the 2020 CPhI Annual Report.

Fiona Barry is the associate editor of GlobalData PharmSource, responsible for editorial content including GlobalData PharmSource’s Trend Reports, monthly Bio/Pharmaceutical Outsourcing Reports, and quarterly Emerging Market Outsourcing Reports. She previously worked as an investigative journalist for GlobalData’s drug development news service, formerly BioPharm Insight, reporting scoops on clinical trials, contract pharma, rare diseases, and women’s health. She is also an experienced financial journalist and a frequent expert speaker at pharmaceutical industry conferences. Barry worked for several years as a reporter at William Reed Business Media’s French office, breaking global manufacturing, regulatory, and outsourcing news for the biopharmaceutical industry for in-PharmaTechnologist, Outsourcing-Pharma, and BioPharma Reporter. She holds an MA in English and a BA in English and Philosophy from the University of Bristol, U.K.