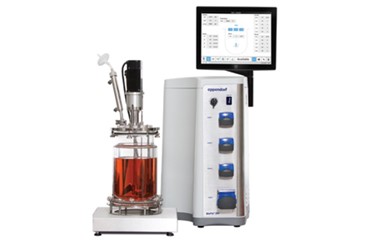 Effective drug discovery and development relies in large part on the availability of predictive preclinical model systems. Application of human cellular models from tissues which are difficult to access, such as cardiomyocytes and neurons, is still challenging. Technologies based on human induced pluripotent stem cells (hiPSC) hold great promise to overcome this challenge. Their routine use in industrial drug research requires a constant supply of stem cell-derived cells of consistent high quality. Researchers from Ncardia® developed a bioprocess for the large-scale manufacturing of cardiomyocytes derived from a variety of healthy and diseased hiPSC lines for implementation into their DiscoverHIT platform.

They expanded hiPSCs as cell aggregates, in a DASbox® Mini Bioreactor System. Aggregate size, hiPSCmarker expression during the expansion phase, and differentiation to the desired cell type were reproducible in three batches. In a proof of concept study, the researchers scaled-up the process using a BioFlo® 320 bioprocess control system. The cells retained key iPSC markers during the expansion phase, providing confidence that stirred-tank bioreactors are suitable to scale-up the production of hiPSC-derived cellular models.

The production of several billion cardiomyocytes per batch will enable the screening of large libraries of compounds against phenotypic cellular models representing human biology.