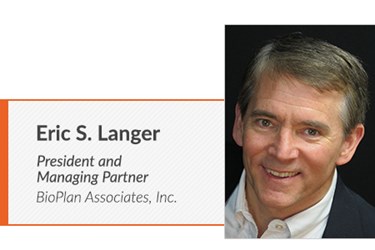 The desire for innovation in the biopharmaceutical manufacturing industry continues unabated, as companies ramp up their spending on new technologies to improve efficiencies in both upstream and downstream bioprocessing. And while innovation in this industry can be slow to come, the past decade has seen the emergence of several new innovative trends, ranging from the proliferation of single-use devices to growing demand for continuous bioprocessing and modular facilities, according to BioPlan Associates’ 13th Annual Report and Survey of Biopharmaceutical Manufacturing Capacity and Production.

In fact, this year’s survey finds that continuous bioprocessing is considered the second-most important trend (or operational area) in the industry today. With almost one in six qualified industry respondents indicating this as the most critical area (more than twice last year’s share), it comes in a close second, behind only general manufacturing productivity and efficiency, the perennial leader.

Continuous bioprocessing is seen as an important trend, one deserving industry attention. For the first time in nearly 10 years, single-use applications did not lead our list of new product development areas of interest, displaced by continuous downstream bioprocessing, which we measured for the first time and which immediately shot to the top of our list. Some 37 percent of respondents indicated that this was one of the top five areas on which they feel suppliers should focus their development efforts, slightly ahead of disposable purification products (34.8 percent) and disposable bags and connects (also 34.8 percent).

From other study topics, we found that almost half (44.5 percent) of qualified industry participants would be likely to specify single-use perfusion bioreactors for a new clinical-scale biologics facility, with almost one in three (32.1 percent) likely to do so for a new commercial scale facility.  However, it is inaccurate to consider continuous bioprocessing adoption a novel trend, as the technology has been in commercial use for over three decades.  Further, whether this becomes an ongoing trend will depend on whether innovation will be able to fulfill the potential gaps in these new technologies.

As noted above, single-use devices occupy two of the three most sought-after innovations this year. Disposable probes and sensors are being demanded by nearly a third (32.3 percent) of end-users, and improvements in disposable bioreactors (31.1 percent) takes the fifth position. This is to be expected, as single-use applications continue to be associated with an array of benefits, ranging from the decreased risk of product cross-contamination to reduced time and costs to get a facility up and running, faster campaign turnaround time, and the elimination of cleaning requirements.  Also, this year more than three-quarters of respondents (78.6 percent) considered the flexibility of a modular approach to be an important reason for increasing their use of disposables.

In our analysis of the critical trends in the industry this year, it’s worth noting that there was an increase in the percentage of respondents who feel that better single-use devices are the overall most important trend.

Single-use implementation is not always an easy task. It is obviously much easier to accomplish with new facilities than with existing ones, which are more likely to be stainless steel-based and retrofitted into a hybrid facility.

Implementation of single-use systems, ideally, also depends in some part on their standardization. Revisiting last year’s study shows us that connector compatibility (interchangeability) was considered by the industry to be the most important area that single-use/disposable vendors needed to work harder to standardize. About 90 percent of respondents found this to be either very important (60.2 percent) or important (29.6 percent).  Bioprocessing professionals similarly found it important that vendors work harder to standardize materials (87.7 percent), components (87.1 percent), characteristics testing (83.5 percent), and methods to evaluate performance (79.8 percent), with fewer seeing need to standardize dimensions and configurations (59.8 percent).

The next phase of bioprocessing’s evolution after single-use systems could well be the trend toward modular strategies, or at the least compartmentalizing and sealing of unit process equipment.  We are just starting to see major modular facilities being constructed.  So far, most involve rapid construction of cGMP-ready facilities in developing countries for manufacture of biosimilars and biogenerics.  This includes a >$300 million GE KUBio modular unit-based commercial manufacturing facility constructed by Pfizer and a smaller-scale CMO facility recently brought online by JHL Biotech, both in mainland China.  The largest GMP-ready facilities currently online using modular units are the G-CON POD-based pandemic vaccine manufacturing downstream facilities of Caliber Therapeutics (a subsidiary of G-CON) in Bryan, TX, with capacity to produce up to 100 million doses/month of tobacco plant-expressed pandemic influenza vaccine, and the PaxVax  Inc. oral cholera vaccine manufacturing facility in Redwood City, CA.

Malik W. Joritz, president of G-CON Manufacturing, notes, “Modular biomanufacturing facilities are being adopted to gain the required flexibility and shorter time-to-run. Modular designs and materials have evolved, [and] the evolution is not stopping at the materials and construction of the modular cleanroom infrastructures, but extend further to standardized or platform systems.”

When we surveyed industry suppliers regarding the top new technologies their company is working on, some aspects of modular biofacilities showed up in the top quartile of new product development areas.

The industry’s key bioprocessing interests and trends — continuous bioprocessing, single-use devices, and modular facilities — are all interlinked and reflect a common desire for greater flexibility in manufacturing, along with smaller scale, quality in building, more choices and options, and reduced cost of goods.

In other words, many of the same benefits are shared by continuous bioprocessing, single-use, and modular systems, including reduced costs, increased productivity, improved quality, and greater flexibility.   With industry professionals seeing need for improvements in these areas, and as more new products enter the market, interest and further adoption of continuous bioprocessing, single-use devices, and modular facilities will increase.

Eric S. Langer is president and managing partner at BioPlan Associates, Inc., a biotechnology and life sciences marketing research and publishing firm established in Rockville, MD, in 1989. He is editor of numerous studies, including Biopharmaceutical Technology in China, Advances in Large-scale Biopharmaceutical Manufacturing, and many other industry reports. You can reach him at elanger@bioplanassociates.com or 301-921-5979.

The 2016 13th Annual Report and Survey of Biopharmaceutical Manufacturing Capacity and Production yields a composite view and trend analysis from 222 responsible individuals at biopharmaceutical manufacturers and contract manufacturing organizations (CMOs) in 28 countries. The methodology also included over 150 direct suppliers of materials, services, and equipment to this industry. This year's study covers such issues as: new product needs, facility budget changes, current capacity, future capacity constraints, expansions, use of disposables, trends and budgets in disposables, trends in downstream purification, quality management and control, hiring issues, and employment. The quantitative trend analysis provides details and comparisons of production by biotherapeutic developers and CMOs. It also evaluates trends over time and assesses differences in the world's major markets in the U.S. and Europe.