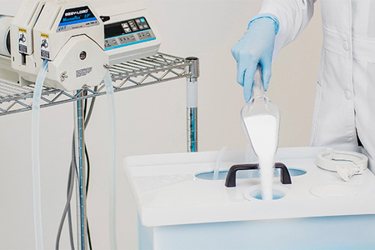 The speed with which homogeneity is reached within solutions is a critical performance attribute of single-use mixing systems. These systems are commonly used in biopharmaceutical and pharmaceutical media and buffer preparation processes, often involving the hydration of a powder. Recirculation mixing performed using a peristaltic pump can provide a simple and cost effective alternative to more elaborate mixing systems such as those which incorporate a magnetically driven impeller.