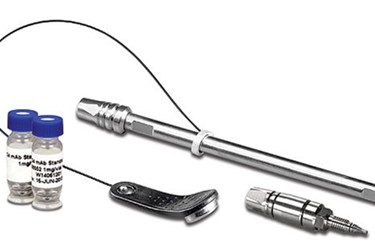 Monoclonal antibodies (mAbs) and antibody-drug conjugates (ADCs) are the fastest-growing class of therapeutic agents. Close to 50 mAb-related products have been approved by the U.S. Food and Drug Administration (FDA) and the European Medicines Agency (EMA) for the treatment of diseases as diverse as cancer, cardiovascular, neurological, autoimmune, and inflammatory diseases.

As with all biomolecules and biologics produced in living cells, mAbs are associated with a certain degree of batch-to-batch variability due to differences between cell lines, post-translational modifications during expression, etc. Some degree of microheterogeneity is inherent to the mAb production process and can be tolerated by patients. However, as sources of variability have the potential to affect efficacy, safety, immunogenicity, pharmacokinetic, and pharmacodynamic profiles, efficient and reliable detection of microheterogeneities is of critical importance.

For companies like Pfizer, a leader in the field of mAb and ADC development, high quality is critical for product performance and integrity, and most importantly, for maintaining the highest standards of patient safety.

Reversed-phase liquid chromatography (RPLC) is a separation technique commonly used to characterize protein therapeutics during their development, due to its high resolving power and amenability to mass spectrometric (MS) detection. However, current RPLC columns have performance limitations, including a dependence on high separation temperatures, which can degrade mAbs, and the generation of potentially unreliable results due to column-to-column irreproducibility.

Building on a 60-year heritage of customer-centric scientific innovation, Waters collaborated with Pfizer to take on the challenge of engineering a novel RPLC column for high-throughput separations with enhanced resolution, selectivity, and recovery of target mAbs and ADCs.

The partnership with Pfizer proved extremely beneficial as scientists at Pfizer’s Analytical R&D Mass Spectrometry and Biophysical Characterization Group ensured the end result would bring maximum value to the biopharmaceutical scientists working with mAbs and ADCs.

Together with scientists from Pfizer, Waters scientists analyzed a range of mAbs and ADCs using different mobile phase conditions. The results of these studies consistently demonstrated the superior kinetic properties of the base particle compared to conventional RPLC stationary phases, and showed that the novel, polyphenyl bonded phase provides enhanced resolution and selectivity to perform higher throughput, reproducible separations, with enhanced resolution and selectivity for both RPLC and mass spectrometry-compatible RPLC separations. Additionally, this novel stationary phase afforded lower temperatures and less acidic ion pairing to limit the degradation of target mAbs and ADCs.

In the end, after extensive evaluation, Waters developed this new particle technology into the BioResolve RP mAb Polyphenyl Column for more reliable, state-of-the-art mAb and ADC separations in support of drug discovery and design, process, and product development, and the commercialization of life-saving medicines.

Pfizer’s Analytical R&D Mass Spectrometry and Biophysical Characterization group has incorporated BioResolve RP mAb Polyphenyl Columns in their standard operating procedures for the characterization of many mAbs and bioconjugates within the company’s pipeline. Pfizer scientists and teams can be certain that the respective protein and conjugate forms are closely monitored in terms of molecular integrity and/or extent of conjugation for assessment of product quality, safety, and efficacy.