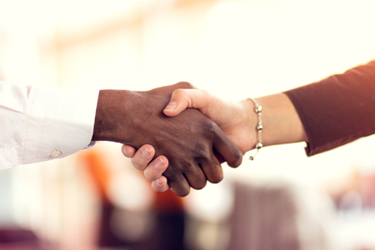 A decade ago, our teams at EY created the Firepower Index to understand how life sciences companies were most likely to use M&A to drive portfolio growth. At the time, we had no idea Firepower, which we define as the capacity for dealmaking based on the strength of the balance sheet, would ignite so much interest — or be so broadly adopted.

Fast forward to 2022, and we now believe it’s too limiting to define Firepower strictly in terms of M&A. Especially as strategic partnerships and alliances have become an even more important means of accessing new capabilities, we have therefore expanded Firepower to account for partnering and “transacting to transform.”

In this article, we will outline the shifts in Firepower allocation and how we believe these trends will inform biopharma M&A in 2022. 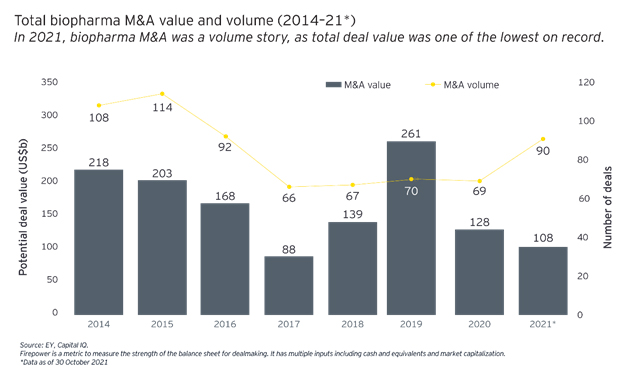 Deal volume increased year-on-year, as biopharma majors opted for smaller bolt-ons rather than transformative M&A opportunities. In all, bolt-on deals represented 88% of total deal volume in 2021.

Betting on bolt-ons was a clear signal of biopharma companies’ appetite for less risky deals, as were the types of assets they chose to acquire. In 2021, biopharmas focused on assets with either low scientific or financial risk: 70% of deals targeted either marketed assets or preclinical and Phase 1 assets. Structured deals were another mechanism biopharmas used in 2021 to reduce the financial risk of M&A investments. While the number of deals with earnout structures has stayed roughly static in recent years, the share of M&A spending tied to future clinical and other milestones reached 8% in 2021.

One reason for the shift away from big M&A had to do with the market dynamics. Although the market for biotech softened in the second half of 2021, historic levels of capital remained available to biopharma companies, whether public or private. Through Nov. 30, 2021, biopharmas raised more than $80 billion in follow-on financing, venture funding, and IPOs, second only to the $90 billion raised in 2020. This capital for early- and growth-stage companies was further augmented by the expanding role of SPACs, which became a force in 2020 that continued in 2021. Such ample liquidity has given potential sellers multiple paths to value creation outside M&A and increased their expectations of the value of their assets.

Access to future innovation is a perennial driver of deals, but a looming patent cliff increases the urgency. The good news for major biopharma companies: Sales of newly launched products between now and 2026 will more than offset sales lost to patent expirations. Moreover, our research indicates that a significant percentage of these revenues are forecast to come from biologics (43%) or new modalities (17%), including cell and gene therapies and RNA-based treatments in therapy areas that have historically had greater pricing flexibility.

However, outside COVID-19 vaccines and therapies, these new products tend to be for smaller indications, meaning they don’t have the same peak sales potential as products in the current portfolio. EY research suggests the CAGR for large biopharmas will drop precipitously in 2024, from 5.2% to 2.6%, significantly underperforming the expected 7.5% growth rate for the entire biopharma industry.

Additionally, we believe the innovations driving biopharma’s growth over the next five years will come from outside the group of established market leaders and outside the established classes of biopharmaceutical products that have historically driven growth. New companies and new product modalities are on track to expand their market share in most major therapy areas in the next five years. The CAGR through 2026 for new players is 60%, with new modalities projected to capture 15% of the market’s projected $320 billion in that time.

Since 2012, there’s been a steady uptick in both total alliance value and volume. Indeed, 2020 was a record year for both metrics, with biopharmas signing 38 alliances with up-front deal values greater than $100 million and four greater than $1 billion. The potential deal value for alliances in 2021 did not, ultimately, match 2020. While biopharmas invested more than $11 billion up front on 273 partnerships in 2021, our research shows that these alliances were smaller investments focused on hedging development risk. In contrast to 2020, there were only 31 partnerships with up front deals greater than $100 million in 2021. 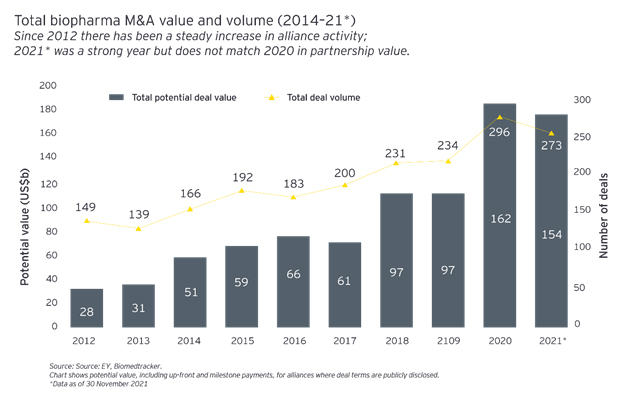 Of course, alliances are another means to offset risk, giving both deal parties an opportunity to mutually demonstrate value earlier in their relationship. Bigger biopharmas can familiarize themselves with newer technologies and get comfortable with the level of scientific risk involved, while smaller companies gain insights into their bigger partners’ operations, culture, and capabilities. Alliances may also give companies a pathway to future M&As, though that historically is the exception, not the rule.

As companies increasingly recognize that ownership is not obligatory, divestments also gain in appeal. But the potential gains are even broader when one factors in the opportunity costs. Time and resources spent managing businesses that are slower growing, or have lower growth potential, is time not spent on the business areas that are the linchpin of future growth. Another mechanism gaining promise: asset-light business models, in which companies transfer assets they need to access but not directly hold to more appropriate owners.

As is true with alliances and divestitures, asset-light models create the operational flexibility and financial headroom to accelerate investment in top priorities. Whether strategic partnerships are used as a pathway to eventual acquisition, to enable product access, or for other goals, these relationships offer significant value to biopharmas. Indeed, they allow companies to stay focused on their core skills, whether those are innovation or development and commercialization. At a time when technologies continue to converge, maintaining focus and using partnerships to explore adjacencies is the right thing to do for patients, too.

The data suggests that when companies deploy capital toward partnerships rather than M&A, they are rewarded with a greater return on their investment. Indeed, our analysis shows that the ROI for partnerships and alliances is 33% higher than for M&A. Given this data, it’s not surprising that we project them playing a greater role than M&A in driving market share for leading biopharmas through 2025.

This is not to understate the challenges of partnering effectively. Smaller companies must be resourced sufficiently to make progress and operate as a genuine innovation engine, without simply becoming a captive of the larger company. Yet, if biopharmas can address these challenges, the rewards are in plain view.

As biopharmas look ahead to the coming year, the looming growth gaps associated with upcoming patent expirations will keep M&A firmly on the agenda. With new modalities set to be a key growth driver, companies will continue to invest in the “hot” new modalities.  Moreover, midsize biopharmas are now potentially able to access the capital to execute M&A. The resilience of life sciences companies during the COVID-19 pandemic, plus private equity’s interest in pursuing a “buy and build” approach in specific therapy areas, means private equity will likely play an even greater role in the M&A picture in the future.

In 2022, high deal premiums will continue to be an obstacle for big biopharma buyers. Late-stage or marketed assets with strong clinical data will continue to command high prices, particularly in competitive therapy areas such as oncology. Yet, some of the largest companies have significant cash resources to deploy for M&A. Such acquisitions would reverse the declining trend for biopharma deal value witnessed in the past two years.

But M&A won’t address another pressing issue for biopharma: As business models shift and pressure mounts to deliver better patient outcomes and experiences, there will be even greater urgency to work with new entrants or other stakeholder partners, especially diagnostic companies and medtechs, to personalize products and share data. Alliances will, therefore, continue to be the primary priority.  In the year ahead, where biopharmas pursue more strategic partnerships earlier to achieve their growth goals, M&A may find itself playing a supporting role. Only time will tell how the industry’s Firepower will be deployed in the months ahead.

Arda Ural, Ph.D., is the EY Americas Industry Markets leader for EY’s Health Sciences and Wellness Practice.  He has nearly 30 years’ experience in pharma, biotech, and medtech, including general management, new product development, corporate strategy, and M&A. Prior to joining EY, he was a managing director at a strategy consulting firm and worked as a VP of strategic marketing and a BU lead at a medtech company. He holds a Ph.D. in general management and finance and an MBA from Marmara University in Istanbul, as well as an MSc and BSc in mechanical engineering from Boğaziçi University.