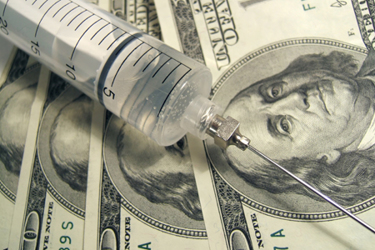 There is a massive amount of wasteful spending in healthcare. Credible research suggests that roughly one-quarter of our total healthcare spending is wasted on low-value care, administrative complexity, including prior authorization processing, and failure of care delivery.

However, there is at least one area in healthcare that is indisputably high value: vaccines. Vaccines are widely regarded as the most cost-beneficial intervention in healthcare. Unfortunately, and counterintuitively, current cost-sharing policies discourage our most vulnerable population – seniors – from accessing vaccines.

Most private insurance policies or Affordable Care Act (ACA) plans provide coverage for vaccines without any out-of-pocket cost to the patient to encourage patients to be vaccinated. Regrettably, the same cannot be said for Medicare. Medicare coverage of vaccines for seniors is a tale of two cities. Vaccines paid for through Medicare Part B that are recommended by the Advisory Committee on Immunization Practices (ACIP) require zero out-of-pocket costs for patients. However, newer vaccines recommended by ACIP, except those for COVID-19, are covered under the Medicare Part D benefit and require an out-of-pocket expense for the beneficiary that can range from a few dollars to the entire cost of the vaccine.

Out-of-pocket cost is not a trivial impediment to vaccine uptake, especially for seniors who are not a low-income subsidy (LIS) Medicare enrollee. Fortunately, LIS-eligible patients receive extra assistance from the federal government, which helps pay for most of the out-of-pocket costs of Medicare Part D covered medicines. This benefit does not apply to non-LIS patients, who make up around 70% of the Medicare-eligible enrollees.

The disturbing but predictable finding of the study was that the abandonment rate for minority patients was more significant at all levels of out-of-pocket costs. For example, when patients were asked to pay between $10.00 and $39.99, the white patient's abandonment rate was 28% compared to 44% for Hispanic patients and 42% for Black patients. The researchers estimated that eliminating the out-of-pocket cost would increase fill rates by 91% and 89% for Black and Hispanic patients, respectively. Finally, study results found that eliminating out-of-pocket costs would increase vaccine uptake by 69% for patients living in highly vulnerable counties.

Patient non-adherence due to increasing out-of-pocket costs is not a new revelation. Even though multiple studies have demonstrated that such phenomena exist in various classes and types of medicines, policymakers have repeatedly turned a blind eye toward solutions that may solve the problem. They have ignored or, worse, politicized reducing out-of-pocket patient spending through the elimination of rebate contracting, which studies have shown would improve patient outcomes and reduce overall healthcare costs. Ignoring the fact of vaccine abandonment due to out-of-pocket cost for the most vulnerable patient population, our seniors, is at best ignorant or at worst immoral. As such, Congress needs to consider H.R. 1978, Protecting Seniors Through Immunization Act,  which would eliminate cost-sharing for Part D-covered vaccines recommended by the ACIP and improve education about available adult vaccines for beneficiaries.

The budget impact of such a change would be nominal. Avalere examined the effect on the federal budget if ACIP recommended vaccine out-of-pocket costs were removed for Medicare Part D enrollees. The study concluded that an increase in annual spending would not surpass more than $30 million because the additional expenditures incurred by Medicare due to increased vaccine utilization and elimination of patient out-of-pocket costs would be offset with overall better health outcomes.

Vaccines provide a fiscally responsible and clinically proven path forward for all of us to survive current and future epidemics until new therapies are discovered. They may even become the preferred treatment option for chronic diseases such as Alzheimer's or Parkinson's. The potential for abuse is nonexistent. In fact, the primary problem with vaccines is underutilization. It is time for us to support our seniors by updating the Medicare Part D benefit design to give our most vulnerable population the same protections the rest of us benefit from every day.