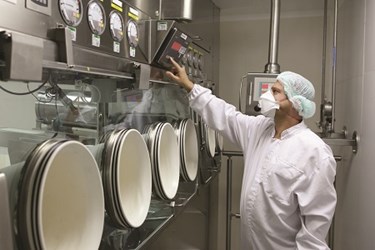 British drug maker giant AstraZeneca announced its plans to expand its Frederick, Maryland biologics manufacturing center in order to support its maturing pipeline, 50 percent of which is comprised of biologics.

The company’s site currently functions as a large-scale cell culture production facility. Expansion designs include building an extra 40,000 square feet of manufacturing, laboratory, and administrative space in addition to existing utility and warehouse spaces. AZ said it expects to create a total of 300 new job positions as part of its expansion plans. The company hopes to have all construction work completed by mid-2017.

The Maryland site is the largest biologics manufacturing facility within AstraZeneca’s assets and is tasked with producing a variety of biologic products, including a pediatric medication. AZ’s global biologics R&D arm MedImmune is developing more than 120 biologics in its pipeline, which includes over 30 products in clinical development. Andy Skibo, regional VP of biologics supply for AZ, said, “The expansion of our Frederick facility will support the progression of drug candidates across our core therapeutic areas, ultimately aiding us in our efforts to make a meaningful difference in the lives of patients through scientific leadership and innovative new treatments.”

Frederick City Mayor Randy McClement said, “We’re very pleased by AstraZeneca’s demonstrable commitment to our local workforce and to our growing biotech community. This expansion will help bring even more high-caliber life science jobs and career opportunities to Frederick and the surrounding region.” According to the Baltimore Sun, state officials wrote to AstraZeneca during the days of Pfizer’s attempted takeover to convince the British big pharma to maintain its investment in Maryland. The officials feared that a takeover would mean the disappearance of local laboratories and with them, jobs.

The state’s Department of Business and Economic Development is also prepared to provide AZ a $1.5 million loan in support of the expansion. The loan is likely to be forgiven in the future if the pharma giant meets capital expenditures goals as well as job growth and retention. The State Highway Administration along with city and county officials made commitments to improve the roads leading to the facility to improve facility access and growth.