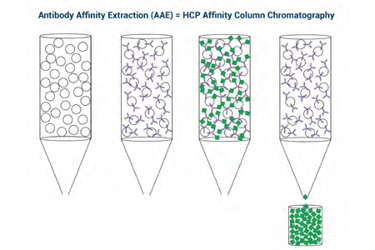 Antibody Affinity Extraction is a novel method developed by Cygnus Technologies to test reactivity of polyclonal anti-HCP antibodies to individual HCPs that co-purify with biopharmaceutical products. AAE is performed by immobilizing the anti-HCP antibody on a chromatography support, typically Sepharose®. The HCP sample is extracted and eluted multiple times over the column until no additional binding occurs. The eluted fractions are all pooled, buffer exchanged and concentrated back to the original sample volume. Analysis of HCPs bound to the AAE column can be performed by 2D PAGE silver stain comparison of the starting sample and the AAE sample. The spot matching coverage analysis can also be performed by Differential Gel Electrophoresis (2D-DIGE) in which both samples are labeled with differential fluors and loaded onto the same gel. Unlike 2D PAGE fractionation followed by Western blot (2D WB) where sensitivity is limited by loading capacity, AAE sensitivity can be over 100 times higher due to the ability to extract and concentrate large sample volumes. In a typical study comparing AAE to 2D WB, AAE showed coverage to 92% of the individual HCPs compared to 55% for 2D WB. The specificity of AAE is also much better than 2D WB. Non-specific binding to the AAE column is less than 0.1% as compared to 2D WB which will often react with up to 50% of all spots present in 2D PAGEs with non-immune antibodies.

In this paper has evaluated three methods to analyze the coverage of polyclonal antibodies to a population of host cell proteins using two-dimensional separation. Observe how with AAE we now have the ability to look at downstream HCPs to determine objectively if a process-specific assay is necessary and superior to a well-developed generic or platform method.