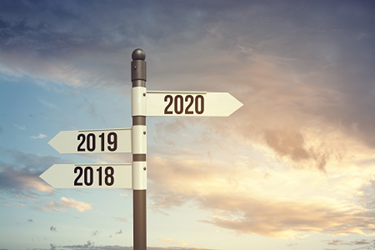 With the year drawing to a close, this is a time to look back, summarize industry trends, and ruminate about what to expect in the coming year. The most important trend, predicted by Bioplan Associates a year ago, was the continued, consistent expansion of revenues among industry suppliers, driven by the increasing global demand for biologics.

The industry as whole has shown surprising resilience and consistency, emerging relatively unscathed from the recession at the beginning of the past decade. Capacity and expansion were relatively unaffected and continue to draw investors seeking the healthy returns and recession-resistant risk profile.1

There have been challenges, including increasing criticism of exceptionally high prices, general worldwide economic concerns, and the emergence of biosimilars and biogenerics as they compete for the same markets. The 10,000 or more therapeutics in the R&D pipeline include both low molecular weight drugs and biopharmaceuticals, with nearly 40,000 ongoing or recently reported clinical trials. Among these, 40 percent or more are biopharmaceutical products. A signiﬁcant portion, now more than 1,700 products in the development pipeline, are follow-on biopharmaceuticals, mostly biosimilars and biobetters in major markets, with a large number of biogenerics proliferating in developing countries with looser regulatory structures.

Clouds On The Horizon?

Despite the positive picture describing the last 12 months, we do see concern over the trend for companies, especially Big Pharma, to cut back on expenses by consolidating R&D, with the truncated companies often ending up with a shrunken pipeline of new offerings. Most every merger or acquisition invariably includes the acquirer claiming the new company will have a larger and healthier pipeline, increased capacity, and more adept expertise. However, it also seems that this rarely happens, and after merger and acquisition activity, the new, bigger post-merger/acquisition companies tend to consolidate and cut back R&D, close facilities, and outsource tasks previously considered better done in-house.

This trend is slowing, but any decreases in existing company R&D are likely being more than counterbalanced by established companies and new entrants worldwide jumping in to fill the R&D gap. This increasingly includes a large number of new entrants moving into cellular and gene therapy areas and expansions geographically in Asia, China in particular. The final outcome is that the biopharmaceuticals industry keeps expanding at a steady pace.

As biopharmaceuticals become an ever more significant and lucrative component of the healthcare industry, they are driving a new chapter in the industry. With all sectors entering their development, including Big Pharma, small companies, and foreign participants, the demand for resources, including staffing, is growing. As a result, year after year, hiring the right people is creating real bottlenecks. For example, over 45 percent of facilities are having trouble hiring downstream process development staff, a critical position in the development of a biologic. These problems have existed since at least 2010 and are continuing to grow. Budgets are equally expanding to address these staff shortages.

And the troubles may only be beginning. When promising new technologies, such as cell and gene therapies, move into clinical or commercial development, they will pull staff from existing companies, which will exacerbate shortages. Similarly, as regional growth expands, as for example, in Asia, we will see operational difficulties with staffing up companies, which will create further hiring challenges. 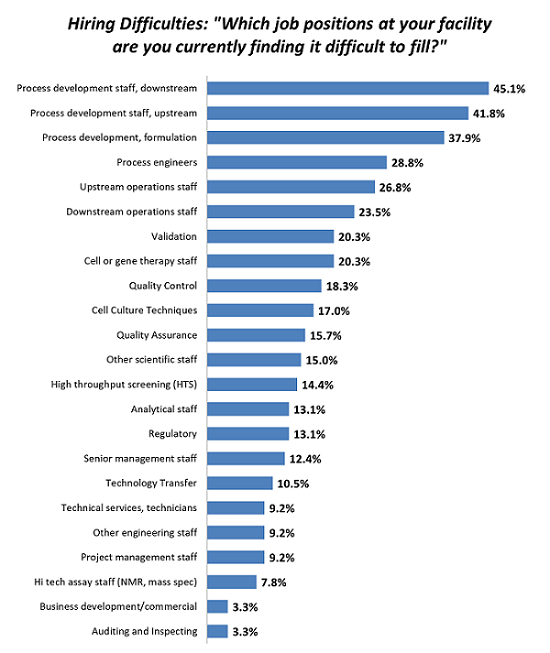 New entrants into bioprocessing are also emerging in China, India, and other developing countries that until recently were not considered part of the high-tech industry mainstream. Expansion of production means not only ramping up bioprocessing capability, but also diversity of output to handle a range of options: cellular therapies, gene therapies, antibody drug conjugates, stripped-down antibodies, RNAi, and live, therapeutically targeted microbes. In China alone, there are more than 150 biopharma manufacturing facilities.2 This is up from 60 facilities just 10 years ago, and the capacity growth is around 20 percent annually. Further, the advances toward GMP competence of these manufacturers is similarly remarkable.

Globally, most large commercial biopharmaceutical manufacturing expansions continue to involve building ﬁxed stainless steel bioreactor-based bioprocessing systems, with commercial manufacturing using single-use systems just getting started. In the monster size class, large stainless steel facilities coming online are exempliﬁed by Samsung and Celltrion in South Korea. Celltrion has reported plans to expand its already super-size 140,000 L plant to 330,000 L capacity. This continued use of stainless steel at the largest scales is in contrast with production of supplies for R&D and clinical testing, now dominated by use of disposable bioreactor systems, with their much smaller size, facilities, and infrastructure investments.

State Of The Industry

The industry is quite healthy, with its ﬁnancial status continually improving. The world market for biopharmaceuticals is now over $275 billion and it continues to grow at 12 to 13 percent annually. Recombinant protein therapeutics are now approaching $200 billion in sales, with non-recombinant vaccines and blood and plasma products comprising nearly all the remainder. New products and expanded approvals for new indications drive market growth in the major markets, and expanding markets, particularly internationally, continue to grow, but mostly with biosimilars/biogenerics.

Overall, 2019 was a strong year for the biopharmaceutical industry, which is well positioned for solid future growth. The healthy revenue growth rate will continue to drive investment in the industry, in some cases at the expense of traditional small molecule drug development. With steady growth, product development and manufacturing must continually increase to keep up. Biopharmaceuticals have simply proved themselves to be more proﬁtable investments than drugs, with much higher proﬁts per sale and greater likelihood of attaining commercial success, including capturing market share, often a simpler and more straightforward path with innovative biopharmaceuticals.

Long range, we have seen increasing numbers of biopharmaceutical approvals over the years, and there is every expectation that this trend will continue (see Figure 2). 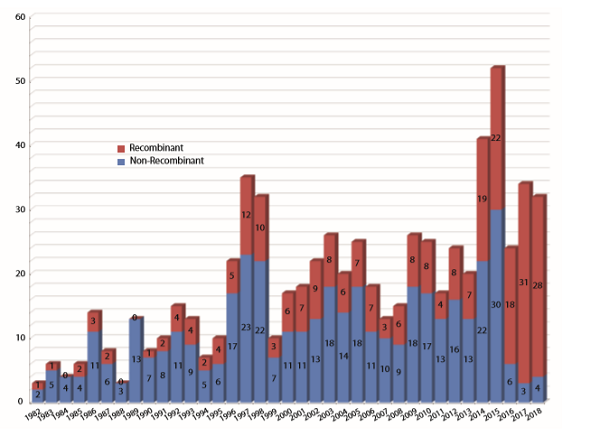 Also, since their cost of manufacture is generally much higher than for drugs, biopharmaceuticals tend to be developed for diseases and indications generally lacking current good options for treatment, assuring them of eager markets upon launch and relatively high sales prices. Even when biopharmaceutical costs are astronomical, such as an upcoming gene therapy from Novartis, with a price tag north of $2 million/treatment (for its spinal muscular atrophy gene therapy Zolgensma), the costs are generally considered “fair,” or otherwise acceptable by payers. Companies and some regulators may base pricing decisions on the argument that many of these therapeutics are outright cures and address illnesses currently lacking effective treatments, thus lowering the patient’s total healthcare costs over time.

Concerns Over Pricing And The State Of The Industry

The pharma companies’ arguments on pricing do not appear to carry much sway with consumers: the past year in the U.S. was a noisy one, with protests against high pharmaceutical prices, a trend that will increase as the U.S. 2020 election season heats up. Recent approvals and market launches, including cellular and gene therapy products costing multiple hundreds to thousands of dollars, are putting a spotlight on biopharmaceuticals. The U.S. remains the largest market without government pharmaceutical price controls, including the absence of forced price negotiations for government healthcare institutional purchases. However, the Veterans Administration remains a major exception, as it does have the freedom to negotiate extensive price discounts. This picture may change, given the current unpredictable political scene. In European countries, cost containment and government-directed cost controls continue to be the norm, but it is argued that they adversely affect biopharmaceutical markets.

New innovative products are now generally priced in major markets, particularly the U.S., by looking at how much is saved with them versus without them or with current treatments, including patient deaths and hospitalization. In the U.S., politicians and activists continue to demand disclosure of prices based on product development and manufacturing costs. However, this may be largely irrelevant for biologics, since pricing is rarely based on these parameters.

A Look Into The Crystal Ball

The industry is continuously building improved bioprocessing technologies to reduce costs, increase efﬁciencies, and improve weak development pipelines. This is reflected in the fact that most large pharmaceutical companies are now spending 40 to 50 percent or more of their R&D budget allocations on biopharmaceuticals. Indeed, incremental innovation in improved manufacturing productivity continues unabated and is a driver for many biopharmaceutical trends. This is exempliﬁed by constant increases in upstream titers. Innovation and expanded options also speed discovery, increase ﬂexibility, and can drive down costs and improve productivity, as documented in Table 1. The current situation in biopharma is enlivening, with new technologies, biosimilars, cellular and gene therapies, and other major opportunities appearing on a daily basis.

Bioprocessing innovations are driving major industry trends, such as:

Overall, 2019’s is respectable financial opportunities in the biopharmaceutical industry are expected to carry over into 2020. We have identified a number of trends that are impacting bioprocessing, with the majority promising positive outcomes. Some of these, such as the prediction of expanded regulatory control, are viewed with trepidation by the industry but, even here there are benefits in providing the industry with a clear view of what will be required by regulators.

K. John Morrow, Ph.D., is a long-time collaborator with BioPlan Associates, Inc. He is president since 2005 of Newport Biotechnology Consultants. He has written numerous articles for Genetic Engineering and Biotechnology News, Life Science Leader, and other biotechnology journals.

Eric S. Langer is president and managing partner at BioPlan Associates, Inc., a biotechnology and life sciences marketing research and publishing firm established in Rockville, MD in 1989. He is editor of numerous studies, including Biopharmaceutical Technology in China, Advances in Large-scale Biopharmaceutical Manufacturing, and many other industry reports. He can be reached at elanger@bioplanassociates.com or (301) 921-5979.