Raises the possibility of interplanetary travel

Researchers from West Chester University (West Chester, PA) have extracted the oldest microbe ever discovered from a salt crystal found in a cavern in southeast New Mexico. Reporting in the October 19 issue of Nature, Russell Vreeland found a spore-forming bacterium, Bacillus species 2-9-3, in a drill sample taken from an air intake shaft at the Waste Isolation Pilot Plant (WIPP), the world's first underground dump for nuclear weapon waste. 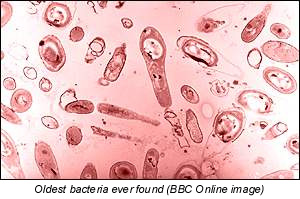 The oldest specimen previously found was a 25–30 million year old bacteria—a youngster compared to the latest finding—extracted from an extinct bee trapped in ancient amber. In that study, as well as the present one, the researchers went to great pains to avoid contamination with present day bugs. Delicate crystal structures and sedimentary features were used to indicate that the salt had not recrystallized since formation. Samples were rejected if brine inclusions showed signs of contamination, and the surfaces of salt crystal samples were sterilized with strong alkali and acid before extracting brines from inclusions. The authors estimate that their sterilization procedures reduce the probability of contamination to less than 1 in 10 9.

The sequences of the 16S ribosomal DNA places the newly discovered organism in the lineage of Bacillus marismortui and Virgibacillus pantothenticus, salt-loving bacteria. Vreeland suggests that the bacteria formed spores around which the salt water then crystallized, trapping the bacteria in a tiny brine pocket some 250 million years ago.

"There are a lot of people who believe that organisms can survive long-term, particularly the spores themselves," Vreeland told BBC News Online. "We have provided the strongest evidence that in fact these things could survive for extremely long periods of time."

"We're 250-million-years and counting basically as far as the survival of an organism goes in a crystal." 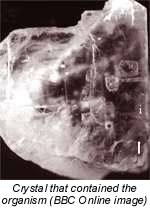 This finding has re-opened an old debate—whether dormant life forms (DNA or spores) can be carried by asteroids or comets, or drift in interstellar clouds, to fall and colonize suitable planets such as the Earth. Travelling at the speed of light, the nearest star to the Earth would take 4.2 years to reach and the nearest galaxy 2.2 million years. But even huge distances like these might be within reach for bacteria that live for 250 million years.

"Once you're out to that distance then you are easily within the time period necessary for a rock to be blown off Mars for instance or even a nearby star and planet, you're within the time needed for that rock to travel to the Earth," said Vreeland.

The most intriguing question, he said, was whether other planets, such as Mars, might harbor life. Salt deposits in the form of halite—the crystals in which the long-living bacteria were found—have been discovered in Martian meteorites.

"When we go to explore Mars, salt crystals would be a spot to look at," Vreeland added.

For more information, contact Russell Vreeland at 610-436-2479 or rvreeland@wcupa.edu.