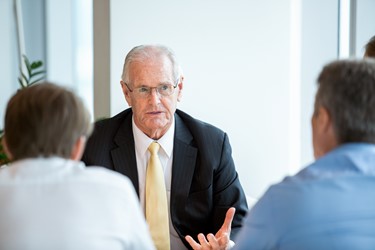 Anthony Grenier is a tech transfer tactician. He’s spent the past 21 years on the process end of pharma, most of those years as an industry man in leadership positions with the likes of Wyeth (Pfizer). It was there, overseeing the movement of several production lines from obsolete to new facilities, that Grenier gained his most extensive experience in the tech transfer discipline that’s become his specialty. After he left Pfizer, Grenier moved to a virtual company that stayed busy acquiring small pharma companies, where he was called on continuously to coordinate and manage the transfer of those companies’ assets and technologies to the parent company’s CMO.

For the past four years as an independent consultant to small and virtual pharma companies, he’s been sharing the insight he gained during those intensive years of tech transfer activity.

We caught up with Montreal-based Grenier for a conversation on tech transfer trends and tips for emerging pharma companies. We found out what to expect from a tech transfer consulting engagement, and how to squeeze the value out of a consultant’s expertise.

Who Needs A Tech Transfer Consultant?

Grenier is usually called into action by small or virtual pharma companies, typically those at the Phase 1 clinical stage, in need of a CMO, and lacking any semblance of experience on the matter.

“I’m rarely approached by a new pharma with an easy product,” says Grenier. “My clients usually have very specific requirements. They’re working on a non-patent drug, for instance, or on products with attributes that are generally just more challenging to outsource.” While those are challenges he thrives on, he says the more unique the application, the more foreign the tech transfer process is likely to be to all parties involved.

Grenier’s first exposure to new clientele typically comes when they’re preparing to move a molecule from development into a GMP environment and on to a CMO. He’s called on to define and establish GMP requirements, winnow down a short list of suitable potential CMO partners, manage the RFQ process, and guide the client through the agreements and contracting phases. For more GMP Tech Transfer considerations, see Start With The End In Mind—GMP Tech Transfer.

Outsourcing these services can prove invaluable to small organizations run by scientists, not MBAs with a deep administrative bench. “My clients are generally neither familiar nor comfortable with establishing GMPs and managing quoting and contracting processes,” says Grenier.

It’s at this point that Grenier typically comes to a crossroads. He’s either thanked for his time and awarded his fees or he’s asked to stay on the job as a project manager to oversee the ongoing CMO relationship.

Priority #1: Picking The Right Partner, And When?

Asked about the most common tech transfer misstep he sees among his clients, Grenier offers no hesitation. “I frequently have companies come to me to bail them out after they tried it themselves and failed because they chose the wrong CMO,” he says. Grenier is quick to point out that the “wrong CMO” doesn’t necessarily equate to “bad.” The opportunities for a wrong turn are plentiful (see 7 Speed Bumps To Avoid When Outsourcing Clinical Supply Manufacturing, for a few examples). Usually, he says, the wrong fit is caused by miscommunication or lack of foresight on the pharma’s part. Vetting a CMO to ensure it can meet the technical, scale-up, and capacity requirements of a project as it moves through multiple clinical phases and, ideally, into production is an all-too-underrated exercise. “We often step in to save projects that make it to a certain stage, either clinical or commercial, with the initial CMO, but need to transfer suddenly and quickly at a stage that demands higher output or a different technical capability,” says Grenier. A qualified consultant can help you prepare for many of these eventualities.

While capacity is important, simply choosing the one that demonstrates an ability to scale beyond your anticipated need isn’t just folly, it’s likely impossible. “For the past few years, CMOs have been very busy,” says Grenier. “There are very few with capacity that’s unspoken for, so choosing one that can balance technical and scale capabilities—and equally important, accommodate your timeline—is a very strategic exercise that requires expertise and a significant network.” Grenier advises that sponsors choose consultants with wide networks, because it’s not uncommon to request quotes from three, four, or more CMOs that meet initial technical, timeline, capacity, and compliance criteria.

Grenier recalls that early on in his consulting career, he was often rebuffed by pharma prospects approaching Phase 2 clinical trials who thought it was too soon to be engaging a conversation about tech transfer. "Come back to us when we have positive Phase 2 results," they would tell him. Grenier says that’s often the result of a funding concern, because many trials (and subsequently, so much funding) collapses after Phase 1 and Phase 2 failure. Still, he says you should be mapping a phase ahead, at the latest. At Phase 2, that means making a plan for tech transfer and scale-up in a cGMP environment.

Grenier says innovation is alive and well-funded in the pharma industry. “I see many small pharma and biotech companies that are getting very good funding based on the promise of their early developments,” he says.  “There's a record amount of requests, and CMOs are experiencing unprecedented demand,” He says he’s impressed to see so many companies moving projects forward, and at a high rate of speed.

On the other hand, that success is feeding into a CMO capacity shortage (for more on that, see the ISR Research report For Whom Is Bioprocessing Capacity Scarce?). “Particularly with oncologic products, it's quite challenging to find places to manufacture them,” he says.  If you’re working on lyophilized and highly-potent products, it’s essential to plan even farther—at least a few quarters—in advance. Having some outside expertise on CMO selection is beneficial. Grenier has seen projects delayed by several months because the only CMO with available production capacity was geared for higher or lower volumes than the project in question demanded. “Even in a near-ideal situation, there may be a need for slight compromise when choosing a CMO,” he says. “But when there’s nothing, there’s nothing.”